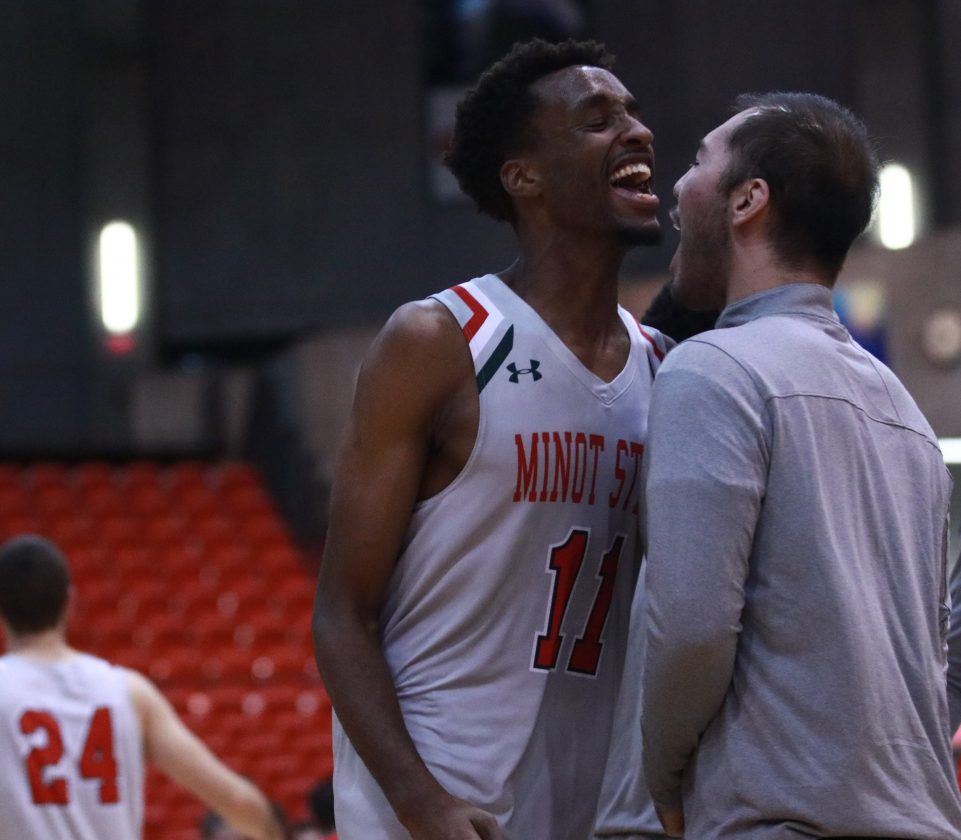 After a tightly contested first half, the Minot State men’s basketball team held a slim 36-34 lead over Montana State Billings.

The Beavers scorched the nets in the second half. Minot State (4-0) beat the visiting Yellowjackets 83-74 in Saturday night’s contest at the MSU Dome.

The Yellowjackets (1-2) sprinkled in different defenses during the first half. A triangle-and-two defense helped stifle the Beavers in the opening stanza, but MSU shot 8-for-11 from distance (73%) in the second frame.

“I’m really excited about the way we played tonight,” Minot State head coach Matt Murken said. “We played some really good basketball for most of that game. We had a little stretch in the first half where we allowed a 12-0 run. Other than that, we beat them by 20-plus. It certainly helps to be home, and it certainly helps to be shooting on your home court.”

Senior guard Kyle Beisch (5-12 3PT) provided a solid chunk of the Beavers’ scoring. As the teams traded punches in the first half, Beisch found some open shots and nailed them to the tune of 21 points.

“We have a lot of confidence in all of our players,” said Beisch, who also grabbed a team-high 10 rebounds. “We just work on our games, and we have a lot of trust.”

Another bright spot for the Beavers was junior forward Stephane Manzi, who posted his best all-around game of the season (19 points, seven rebounds, 5-6 3PT). Whenever MSU needed a key basket, Manzi answered the bell.

“Everybody bought into their jobs,” Manzi said. “Everybody on the team has a specific role. I think everybody did a good job of (playing) their roles. That’s what’s got us the ‘W’ tonight.”

Added Murken: “Stephane Manzi is a kid who hasn’t shot it well this year, but that young man really works on his game. We think he’s got a really bright future.”

The Yellowjackets also found their rhythm from distance, shooting 41% from beyond the arc. Free throws proved to be an Achilles heel, as MSUB shot just 6-for-11 from the charity stripe.

MSUB was led by sophomore forward Brendan Howard with 31 points.

“It helps to make a few more shots and get hot,” Murken said. “When the ball goes through a few more times, you start feeling better for sure. Our floor spacing really opened things up for us and really allowed for some driving lanes.”

After Wednesday’s 74-63 win over Dickinson State, Cody said the Beavers would not win on Saturday if they put up a similar performance.

MSU showed marked improvements in nearly every facet of the game on Saturday night. The Beavers converted seven MSUB turnovers into 12 points and held a 16-7 advantage on the break.

“We didn’t settle for as many bad shots as we did the other night,” Murken said. “We attacked the basket harder. When we did get to the basket, we kicked it out to shooters a little better and shot rhythm threes. I definitely feel good about the way we played, especially on the offensive end.”

After playing three games in seven days, the Beavers will hit the court again at 4 p.m. on Nov. 23. MSU will welcome Yellowstone Christian College to Minot.

“Excited to be 4-0,” Murken said. “Excited to have some time off. We need to get healthy and we need to really teach as a coaching staff. We need to fine-tune the execution at both ends of the floor, offensively and defensively. Just some of those little things that have been slipping through the cracks. It’s a week to teach, and it’s a week to rest. It’s a great chance for us to get better over the next seven days.”