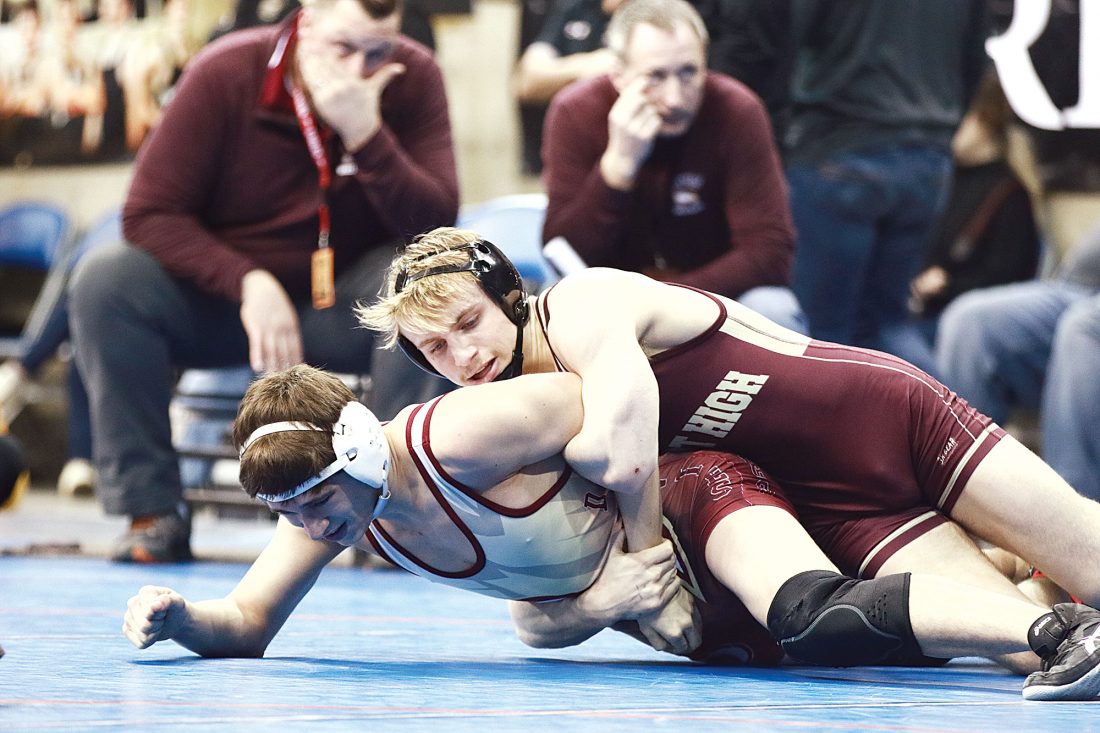 FARGO — Once the Magicians found their rhythm, they couldn’t be contained.

The West Region No. 2 Minot High School wrestling team earned a decisive 49-25 victory over the East Region No. 3 Fargo Davies Eagles during the first round of Thursday’s Class A Team Dual Tournament at the Fargodome.

After the Eagles captured two early victories, the Magi halted their run.

“We were aggressive the whole time,” Minot head coach Justin Racine said. “We were getting after it. That’s what we’re going to have to do for the individual tournament and for Jamestown tomorrow in the semifinals. It’s important to get after it and be aggressive from the first whistle to the last whistle.”

Davies’ Truman Werremeyer and Arthur Harris provided the Eagles with 10 early points. From there, Minot rattled off seven straight victories. 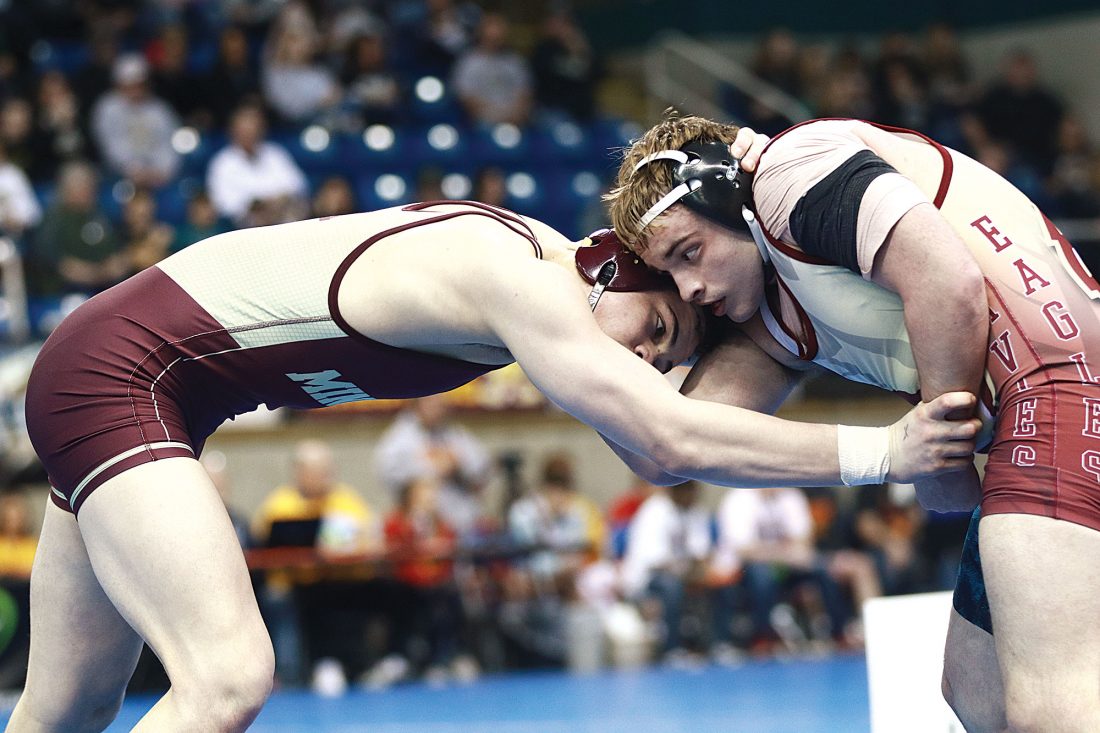 Gabe Mortensen got the ball rolling with a 1:03 pin over Malachi Werremeyer in the 106-pound weight class match Tyler Nelson followed suit by pinning Abdi Nuur in just 0:31 at 113.

Next, Victor Garcia kept the pinning streak alive with his 3:19 victory over Sajan Guring at 120. At 126, Minot’s Paden Combs engaged in a topsy-turvy tangle with Clayton Nissko.

Momentum shifted throughout the match, but Combs eventually emerged with a 12-9 decision victory. Minot’s Kelby Armstrong flexed his offensive muscle at 132 with a 1:25 fall victory over David Arop.

“We’ll go out there and be aggressive,” Racine said. “We’ve got to take care of business in dual wrestling. We’ve got to get those bonus points, and that’s what we did.”

“His ties were pretty good,” Schulze said about Frie. “It was hard to stop him and move him around. I want to keep pushing myself and get all the shots.”

Trevon McClanahan used his takedown technique to his advantage in his 145-pound match against Ryan Barth. McClanahan scored six more points for Minot and helped the Magi gain a 37-10 advantage.

After Davies’ Landon Allex seized a 7-4 decision victory over Carter Peterson at 152, Minot’s Chase Burke methodically worked his way to a 3:59 fall victory over Ahmed Nuur at 160.

The rest of the match was academic. Davies picked up two more victories, but Minot’s Jacob Carmichael finished the job by pinning Andrew Teigen in 1:07 at 195.

“We wrestled (Davies) earlier in the season,” Racine said. “It’s always tough to wrestle a few times. Guys make adjustments, but I felt like our guys handled it really well and took care of business.”

Minot will meet a familiar foe this afternoon. The Magi and West Region No. 4 Jamestown will square off at 12:30 p.m. Back on Jan. 9, Minot earned a 40-19 victory in the Buffalo City. Winner goes to the state championship match at 7 p.m.

Six Minot wrestlers will participate in the Class A Individual Tournament semifinals. Here’s a look at who will represent the Magi going forward.

After achieving two pins on Thursday, No. 3 Mortensen will square off against Valley City’s Koye Grebel at 106. Grebel is wrestling as the No. 2 seed.

At 132, No. 3 Armstrong will battle against Bismarck High’s Kaden Renner. Renner lays claim to the No. 2 seed.

No. 3 McClanahan earned a technical fall victory and a major decision win in his first two individual matches. He will meet No. 7 Tim Kadrmas of Legacy in a 138-pound semifinal.

At 160, No. 2 Burke kept his recent hot streak alive by recording two decision victories. He will tangle with No. 3 Brandt Kringlie of Bismarck High.

No. 2 Carmichael will face a solid competitor at 195. Valley City’s Jonah Schuldheisz has locked up the No. 3 seed and will face Carmichael today.

Rounding out the list, No. 2 Jones will represent Minot in a 220-pound semifinal. Jones contributed two pins during Thursday’s action and will meet No. 3 Ben Anderson of West Fargo.

Alex Eisen/MDN Minot High senior swimmer Troy McManus competes Thursday evening on senior night in Minot. The Magicians recognized their 13 seniors and picked up a double dual meet win in the process over Williston (144-37) and Dickinson (138-48). 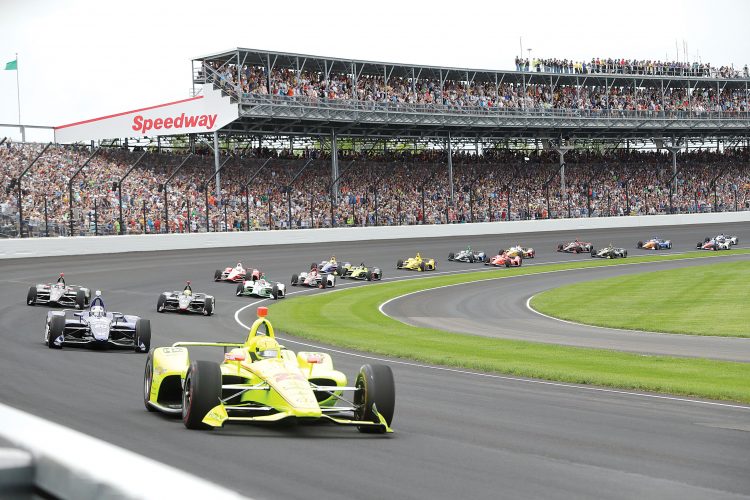 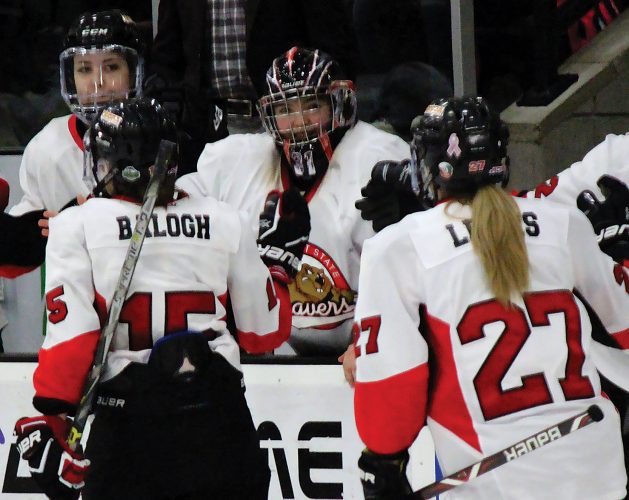