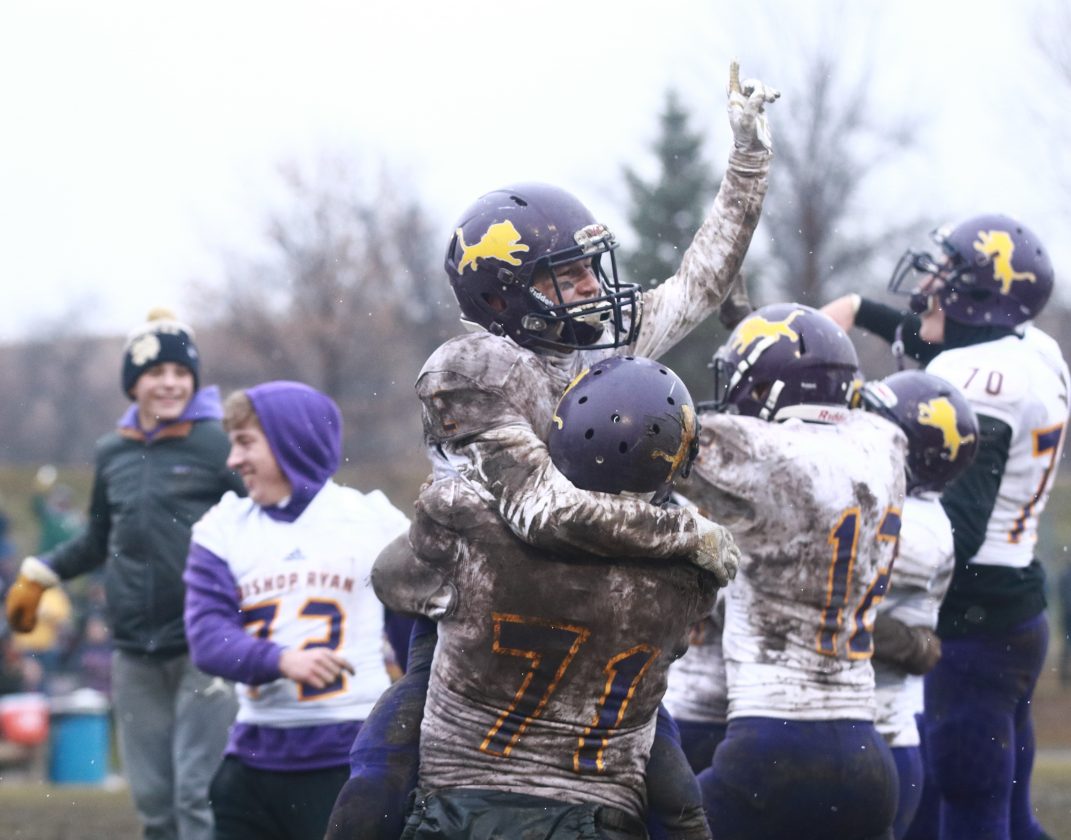 VELVA — While Roger Coleman watched the Bishop Ryan football team dictate the terms of Saturday’s engagement, something peculiar swirled in the air.

Saturday’s Class A semifinal matinee between Region 3 No. 1 Velva (10-1) and No. 2 Ryan (11-1) started off with drizzling rain and finished with heavy snowflakes. The Lions used the elements to their advantage, capturing a 32-20 road victory over the Aggies in a mud-soaked contest.

“We came out right away and played with that fire,” Coleman said. “We kind of dominated the line of scrimmage from the beginning. Our kids work so hard, and they showed how hard they work. They dominated up front, and that’s what we needed them to do.”

Those linemen opened holes for Ryan junior running back Logan Merck. Merck obliged, scoring all three of Ryan’s touchdowns in the first half.

Junior quarterback Nick Sanders linked up with Merck for a 17-yard pass on a fourth down, giving the Lions some early momentum. The running back then scampered for respective three-yard and 16-yard touchdowns before the break.

“That’s what kids dream of,” Merck said. “That’s awesome. Little kids on the sideline looking up to us. That’s one of the best feelings I’ve ever had.”

The Lions took an 18-0 lead into halftime, and Feller decided to make his mark on the offensive end after the break. His 10-yard rushing touchdown and Ryan’s successful two-point conversion attempt boosted the score to 26-0.

“It feels so awesome,” Coleman said. “I couldn’t be any more proud of the guys.”

“Up front is where the game is won and lost,” Coleman said. “Those guys, they don’t ever get interviewed. They don’t care to get interviewed, but they just battle and win the line of scrimmage night in and night out. That’s where the love needs to go.”

After Velva drove all the way down the field, Selzler found Suckut for a two-yard touchdown reception. Suckut snagged the pass as the final horn sounded, and Ryan walked away with the 32-20 win.

“We can’t judge ourselves by one game, a win or a loss,” Velva head coach Larry Sandy said. “We can judge ourselves by how we respond to the loss. At this point, we’ve got a whole year to let that simmer and try to put ourselves back in this position next year.”

Ryan earned a state title spot and exacted revenge after losing 32-24 in Velva on Sept. 20. The Lions will travel to the Fargodome for a noon contest against Langdon Area/Edmore/Munich on Nov. 15.

“It’s the best feeling in the world,” Merck said. “Twenty years, Bishop Ryan hasn’t been there. We’re back. And we’re not done yet. We’re going to win that thing.”