Old-fashioned reporting most compelling aspect of ‘She Said’ 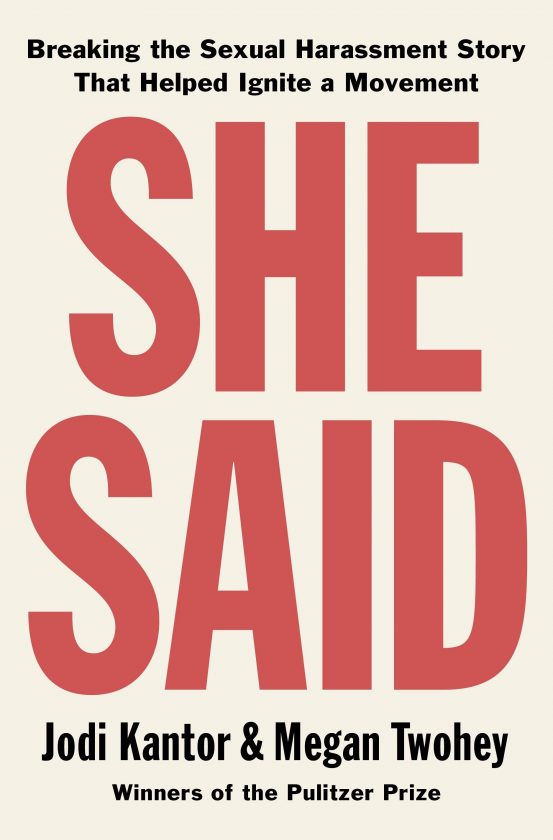 This cover image released by Penguin Press shows "She Said: Breaking the Sexual Harassment Story That Helped Ignite a Movement," by Jodi Kantor and Megan Twohey. (Penguin Press via AP)

(AP) — “She Said: Breaking the Sexual Harassment Story that Helped Ignite a Movement” by Jodi Kantor and Megan Twohey, the behind-the-scenes book about how these reporters investigated Harvey Weinstein, is jarring, riveting and, for journalism, necessary.

The book’s most compelling aspect is old-fashioned reporting — knocking on doors, obtaining records, clandestine meetings, tapping sources — and is the structure that holds up this book and is what earned The New York Times’ Twohey and Kantor the 2018 Pulitzer Prize in Public Service.

Because of the investigative reporters’ work, Weinstein was arrested and is now free on $1 million bail, pleading not guilty to charges of rape and sexual assault. He has denied all charges of non-consensual sex. A trial is scheduled for January.

The number of lawyers mentioned in the book brought in to cover up, smear or throw off reporters is also impressive. Emails are included and they are incendiary, like the one from Weinstein’s brother, Bob, confronting Harvey and urging him to get help.

“You have hurt many people with this behavior as well. You have picked on people and used your power over them. You have brought shame to the family and to your company through your misbehavior,” Bob Weinstein writes.

Kantor and Twohey persisted, tracking down stories and allegations even when the sources wouldn’t go on the record. In writing the book, well after the story broke, they revisited those used for background and information, but weren’t mentioned in the published stories. Here they are on the record. There’s a cathartic last chapter in which accusers gather in California to discuss the #MeToo movement.

It’s important to note the tactics that Kantor and Twohey used for the delicate task of communicating with accusers, often reticent about coming forward, especially “what to say in the very first seconds of a phone call with a stranger who might be a victim.” Twohey’s approach for getting rape victims to share their experiences was “I can’t change what happened to you in the past, but together we may be able to use your experience to help protect other people.” The pitch centered on helping others. “This was always the truest, best reason to talk to a journalist,” the women wrote in “She Said.”

One of the best scenes in the book is when they are getting ready to publish their bombshell story that ran on Oct. 5, 2017, that documented the accusations against Weinstein.

They present their findings to Weinstein and his people for a response. As the clock ticks toward their deadline, they worry about whether another organization will break it and if sources will be intimidated into withdrawing their accounts. Judd comes forward, agreeing to go on the record, during the wait: “Jodi lost it, like a marathoner collapsing at the finish line. … Weeping, Jodi searched for something to say to Judd that was equal to the moment but still professional.”

The nuts and bolts reporting techniques add to the drama: slugging their story in a cryptic way to keep it hidden even from other reporters, the back and forth with editors and figuring out how much time to give Weinstein and his team to respond.

The mechanics of the deadline reporting, with the knowledge that Ronan Farrow of The New Yorker (also a Pulitzer-Prize winner for his work on this subject) wasn’t too far behind them, also makes for a compelling narrative.

Having this in all one place is overwhelming and historic and disturbing. Just the number of mentions of Weinstein in a bathrobe allegedly asking actresses and employees for a massage is difficult to take.

The depictions of Weinstein meeting with the Times reporters are also unsettling. Earlier in the book, Kantor approaches him in the lobby to introduce herself. He had just left a meeting to address accusations in another story regarding AIDS research funds. He is described as leaning into Kantor “with such intensity that she had to remind herself not to show any signs of intimidation.” He mocks their investigation and proposes to sit down at that moment. Kantor tells him that they would reach out when they were ready. According to “She Said,” he tells her that he hadn’t done those things, adding “I’m worse.”