It’s a coaching cliche that has been used for decades, especially in the buildup or the aftermath of a big game.

On the surface, it’s a simple quote that bluntly summarizes the situation at hand and is 100 percent true. Yet, it also minimizes the hype surrounding an event.

“You know, it’s just another game,” MSU volleyball head coach Dana Cordova said. “We understand the importance of playing the in-state rival, but for us and like I told the girls, ‘It’s just another Tuesday game.’ We are going to go down there, be prepared and play the game.”

It’s a perfectly reasonable response from a coach. Downplay the occasion to keep your players relaxed before going into what should be a hectic environment.

“We need three points tomorrow, it’s one game at a time,” MSU women’s soccer coach Jason Spain said. “I’m sure our girls are upset (about what happened last year with two defeats to U-Mary) and, if they remember it or not, we haven’t mentioned it.”

Again, understandable for a coach to pretty much ignore the history of the rivalry when it’s not favorable at the moment. Focus on the present and what can be controlled.

The rivalry aspect wasn’t mentioned or brought up in the press conference with MSU head football coach Mike Aldrich. While I can’t speak for everybody asking questions, I felt it wasn’t even worthwhile to ask the stereotypical rivalry question.

Odds are it would only generate a similar response to what Cordova and Spain gave, plus it’s a question that gets overused and isn’t original. That could be a logical reason why coaches generally respond to the question with a cliche.

And I don’t blame them and I certainly understand why they do it. This type of approach in handling the hype of a rivalry game works. That’s why it’s used time and time again.

Also, coaches are cautious in not providing bulletin board material to their opponents and certainly don’t want to stress out their own players.

However, I think the byproduct of doing this takes away some of the allure of a rivalry game. This game should mean a little bit more than, “just another game.”

To the community, this isn’t another game. The atmosphere and the intensity of these games are different and unique.

I fear, over time, this “just another game” mentality will chip away at what makes rivalries special. Coaches are no longer fueling this fire, but that’s not their job and it doesn’t make sense for them to do so.

Therefore, the preservation of what makes U-Mary week different is in the hands of the two communities in Minot and Bismarck.

At the end of the day, it’s clashing supporter groups that provide the lively environment needed to foster and maintain a rivalry.

Once communities start to recognize each game as “just another game,” that’s when rivalries start to die.

I can’t say if Minot State vs. U-Mary is getting to that point, but it would be a shame if it did.

Sitting in the press box or on press row, I enjoy dueling supporters in chanting battles and all the intensity an energetic crowd can provide (as long as it doesn’t get too out of control). As a former high school athlete, that’s intoxicating.

That’s what this rivalry needs this week… and every year.

Hopefully, the “just another game” talk doesn’t deter that. 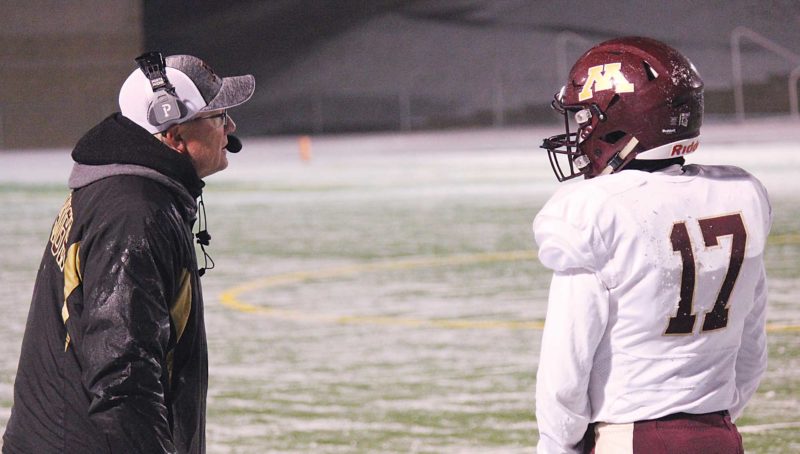