EISEN: Beavers are back, Sofia Lewis closing in NSIC Freshman of the Year 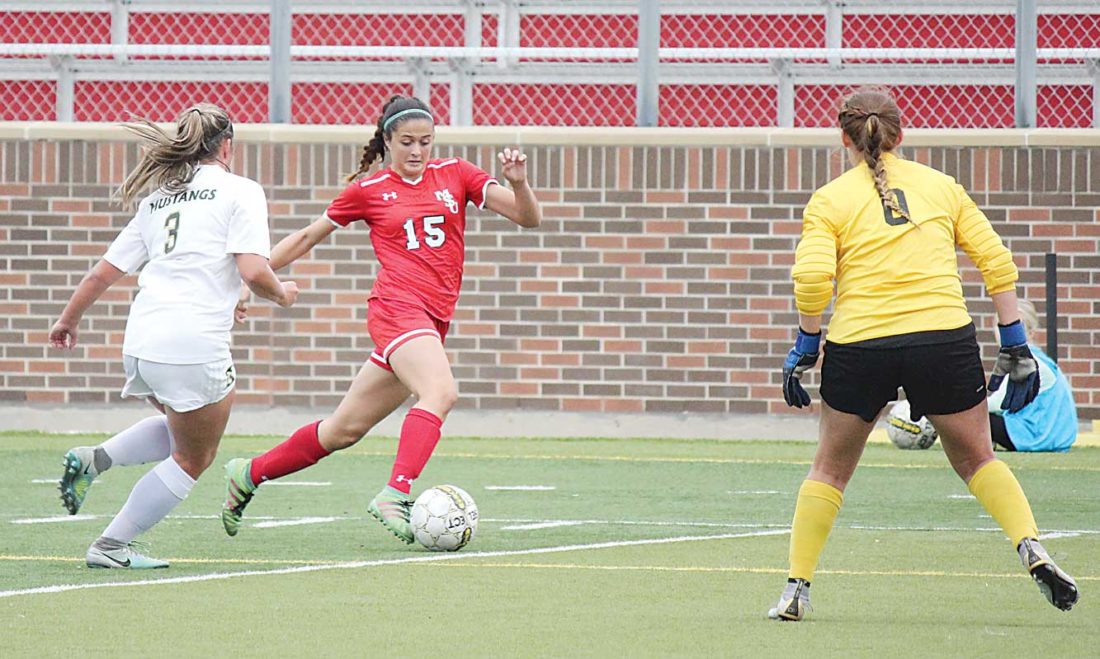 To the teams at the top of the Northern Sun Intercollegiate Conference women’s soccer standings: The Minot State Beavers in your rearview mirror might be a lot closer than they appear.

With road victories against Upper Iowa and Winona State over the weekend, MSU (9-4-1, 8-3 NSIC) continued its climb up the conference standings and increased its NSIC-leading win streak to six straight games.

At the forefront of MSU’s late-season charge is Minot native Sofia Lewis. She has picked up at least a point in the Beavers last six games and has quickly become the NSIC Freshman of the Year frontrunner.

The offensive impact provided by Lewis has the Beavers back in the hunt for a NCAA Tournament berth.

The defending NSIC regular season champions are currently fourth in the conference with 24 points, and trail Minnesota State Mankato (31), Bemidji State (29) and Augustana (26) with four conference games remaining. The top four teams get a home first-round game in the NSIC Tournament.

At this point, for MSU to return to the NCAA Tournament for a third consecutive season, a conference tournament championship might be the Beavers best bet.

Only six teams out the Central Region make it to the NCAA Tournament with the three conference tournament winners in the NSIC, Mid-America Intercollegiate Athletics Association (MIAA) and Great American Conference (GAC) getting automatic bids.

The most recent Regional Standings (released Oct. 3) by the United Soccer Coaches association didn’t have MSU ranked inside the region’s Top 10. Last season, despite an undefeated conference season (14-0-1), the Beavers barely made the Division II national tournament by being the last at-large team selected from the region.

A slow start to this season — conference losses to the University of Mary, Augustana and Bemidji State — put the Beavers in this unfavorable situation and have them on the outside looking in.

Now, six straight wins later, the Beavers should be treated as the team nobody wants to face.

Why? The offense finally caught up with the defense.

The Beavers have only given up eight goals in 14 games this season. All four of their losses have been by a goal, three of which by the minimum at 1-0.

The defense hasn’t been the problem, getting goals at the right time has.

Lewis has helped provide the spark MSU has been missing with six goals in the last six games. She is tied for the most goals (10) in the NSIC and has the second-most points (24) in the conference. The next closest freshman is Bemidji State’s Allyson Smith with six goals and 19 points.

Smith has played one less game, but Lewis has been far more efficient with her finishing — taking 12 fewer shots to score four more goals.

Her teammate Erin Rafferty earned the honor of being the NSIC Goalkeeper and Freshman of the Year last year.

If Lewis does keep the NSIC Freshman of the Year accolade here in Minot, it will be just another prestigious award to add to her collection. The three-time first team All-State selection for Minot High School was named the North Dakota High School Gatorade Player of the Year and the WDA Senior of the Year earlier this spring.

It’s been a memorable six months to say the least. But, Lewis would be the first to point out that it’s really the team’s success that matters.

A come-from-behind NCAA Tournament berth would surely help in healing some of the old wounds left behind from the Minot High Majettes soccer team’s early-round shortcomings at state.

While the Beavers are back on track to make a postseason push, they will be challenged this weekend.

If Lewis and company keep the goals coming, then MSU can ride this winning streak back into the national spotlight.

ND COVID-19 numbers announced on May 22

Commerce has been stellar through COVID-19