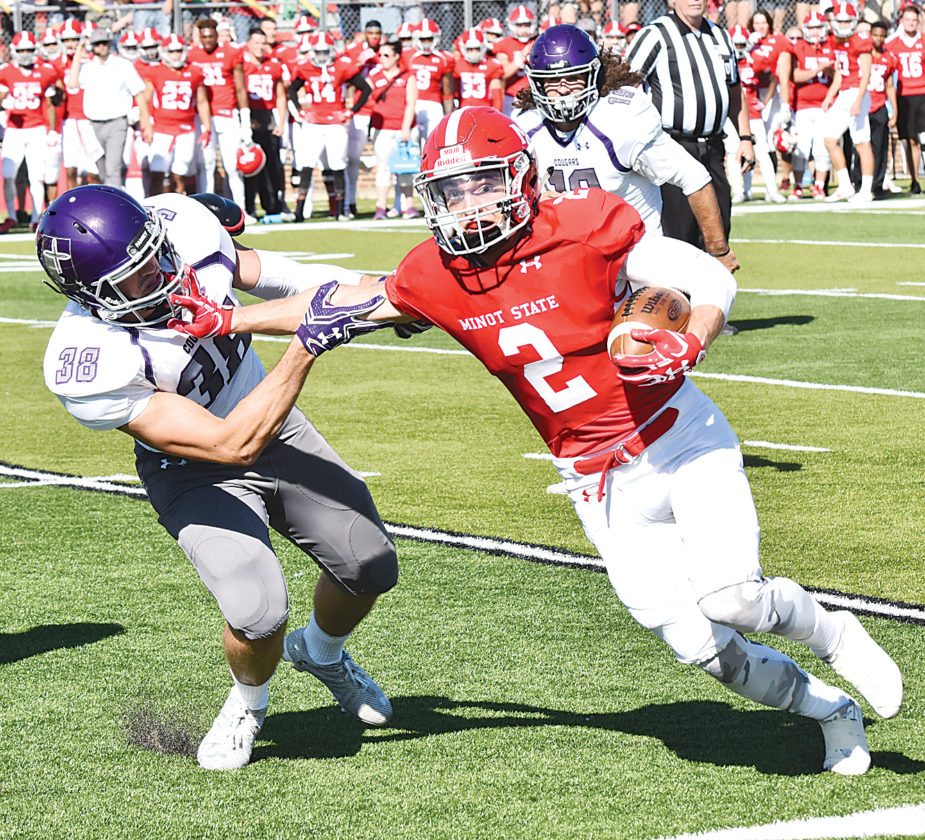 Editor’s note: This is part two of a two-part series in breaking down and predicting what the maximum (ceiling) and minimum (floor) number of conference wins each Minot State athletic program could achieve next season.

Minot Daily News reporter Alex Eisen sorted out the MSU women’s programs in a column that ran in Thursday’s paper, while today I’ll be taking an in-depth look at the prospects of the men’s teams.

At first glance, it appears the MSU men’s programs shouldn’t have a hard time at least matching their combined 36 conference wins from a season ago.

Unlike the women’s side, which has a perennial NSIC powerhouse in women’s soccer, the men don’t quite have a team you can count on year in and year out to be at the top of the league. However, all four programs appear to be on the rise and have a shot at performing better than they did last year.

The way Scott Eul’s first season went at Minot State, he probably should have earned at least some consideration for NSIC Coach of the Year.

The 2017 season had a little bit of everything. MSU upset then-No. 21 Minnesota State Mankato 10-5 on April 8 and also had enough team chemistry built up that players would celebrate series wins on the road with dance parties.In the “things you’ve never seen before” category, there was even a game where right fielder Michael Borst tagged out a runner caught between first and second unassisted running in from the outfield.

Can the Beavers build upon the momentum Eul and company created heading into 2018? Well, the loss of all-NSIC first-teamer and gold glove centerfielder Jordan Schulz certainly hurts.

Schulz led the Beavers with a .375 batting average and was sixth in the NSIC in that category. He was an on-base machine with a .479 on-base percentage good for fourth in the conference and Schulz was one of just eight players in the league to sport a perfect 1.000 fielding percentage.

Yet, the presence of Borst will still strike fear into opposing pitchers. Borst, entering his junior year, is about as good of a middle of the order bat as they come in the NSIC. He broke a school record for most runs batted in with 57 while slugging six home runs and sporting a .361 batting average. Wyatt Schlosser, Justin Demary, Kyle Williamson, Trevaun Smith and Celestino Rodriguez all return as key pieces in MSU’s lineup in 2018.

MSU will search for a new ace following the graduation of Tanner Alexander. Alexander pitched to a 3.65 ERA in 81.1 innings of work last season with 70 strikeouts and 78 hits allowed.

Several key players that contributed to the Beavers’ first postseason appearance will be long gone, yet enough horses remain for MSU to take the next step, or tread water at the very least.

On paper, at least, this could be the Minot State program poised for the biggest breakout year.

® Every key member in MSU’s rotation is returning except guard Nathan Mertens and forward Stevan Jovanovic.

® The Beavers have the second best player in the NSIC, probably only behind St. Cloud State’s Gage Davis, in Tyler Rudolph. When Rudolph finishes his career this season, he’ll likely be Minot State’s all-time leading scorer and rebounder. The 6-foot-6 forward is a matchup nightmare for NSIC coaches to gameplan against, seeing as he can score inside and out at will. In 2016-2017, he averaged a double-double with 21 points and 10 rebounds per game.

® The rest of the rotation features a guard who rarely misses an open 3-pointer in Russ Davis, an efficient distributor and shooter in point guard Luis Ricci Maia, a grind-it-out player that has never been afraid to dive for a loose ball in forward Trevor Rothstein and guards Nathaniel Moore and Brandon Green, who both can provide a scoring boost off the bench.

This isn’t to say the team doesn’t have flaws. The Beavers aren’t the tallest team in the world with only three players currently listed as 6-foot-8 or 6-foot-9 on the roster, leaving them with matchup problems with the longer teams in the conference, such as Northern State. Nor are they the deepest, as the Beavers sometimes only went with a seven-deep rotation in 2016-2017. New playmakers could emerge, but the Beavers might also have to ask an awful lot of Rudolph, Ricci Maia and Davis offensively.

A significant injury to any of those three would be catastrophic for the Beavers’ chance at a breakthrough year, but if MSU remains healthy, they should finish in the top four in the NSIC North Division again.

Say what you want about former MSU coach Tyler Hughes and his meager five wins in three years. But if nothing else, he left the program in much better shape for new coach Mike Aldrich than the mess Hughes inherited after he took over the Beavers program following Todd Hoffner’s decision to return to Mankato.

Speaking of Aldrich, he owes a steak dinner to all of his assistant coaches for busting their tails to salvage the Beavers’ 2017 recruiting class. Lead by interim coach Shane LaDage, MSU recruited some top tier local talent, including Bismarck running back Lucas Butts and Minot defensive back/running back Manuel Bradford. Pair that with Division I transfers Ben Bolinske and Matt Marler, that gives the Beavers a talented core of players to build around for the future.

That doesn’t mean some talent isn’t already there for MSU. At a spring football practice, Aldrich was having a conversation with one of his assistant coaches. He couldn’t help but think “man, we are a lot better than I thought we would be.”

That could be a theme for the 2017 season. The Beavers won’t rack up any preseason accolades after a 3-8 season last year, nor will they be contenders for the NSIC conference title. Yet, there’s a decent chance the Beavers could be much better than anyone anticipates.

MSU has one of the best safety combos in the league with Bryce Broome and Donnell Vercher, the most experienced quarterback in the conference in Zac Cunha and a head coach that has earned the respect of nearly every other NSIC coach.

The Beavers open the season with a very winnable road game at Concordia University and should also pick up wins at the University of Mary and Minnesota Crookston. MSU’s best chance to get to five wins would be to pick up a road victory at Southwest Minnesota State (the Beavers lost to the Mustangs by a point two years ago) and take down Northern State at home.

Five wins might seem like a stretch, but it’s not impossible. Of course, if Cunha suffers another unfortunate injury, the offensive line can’t protect the quarterback and other NSIC teams gash the Beavers with the running game like they did in 2016, it could be a long year. Somewhere between 3-4 wins seems like the most plausible scenario.

It’s hard not to feel bad for MSU coach Evan Forde after last season. His team was completely bewildered by injuries and lost four out of eight NSIC matches by six or less points en route to finishing 0-8 in conference play.

In terms of tough luck, it’s pretty hard for the Beavers to have any worse fortunes than they did last season, so they should rack up some wins just purely based on the law of averages.

MSU has some studs returning in Minot native Cody Haugen, Jered Sublet and Carlos Toledano. Combine that with the addition of one of the best North Dakota high school wrestlers last season, 220-pound state champion Jordan Will, and the Beavers’ future appears bright. It’s unclear if Will is going to wrestle this season or simply redshirt, but he should make an immediate impact for MSU whenever he suits up.

This is the opinion of Garrick Hodge. He covers Minot State athletics, the Minot Minotauros and high school sports. Follow him on Twitter @Garrick_Hodge.