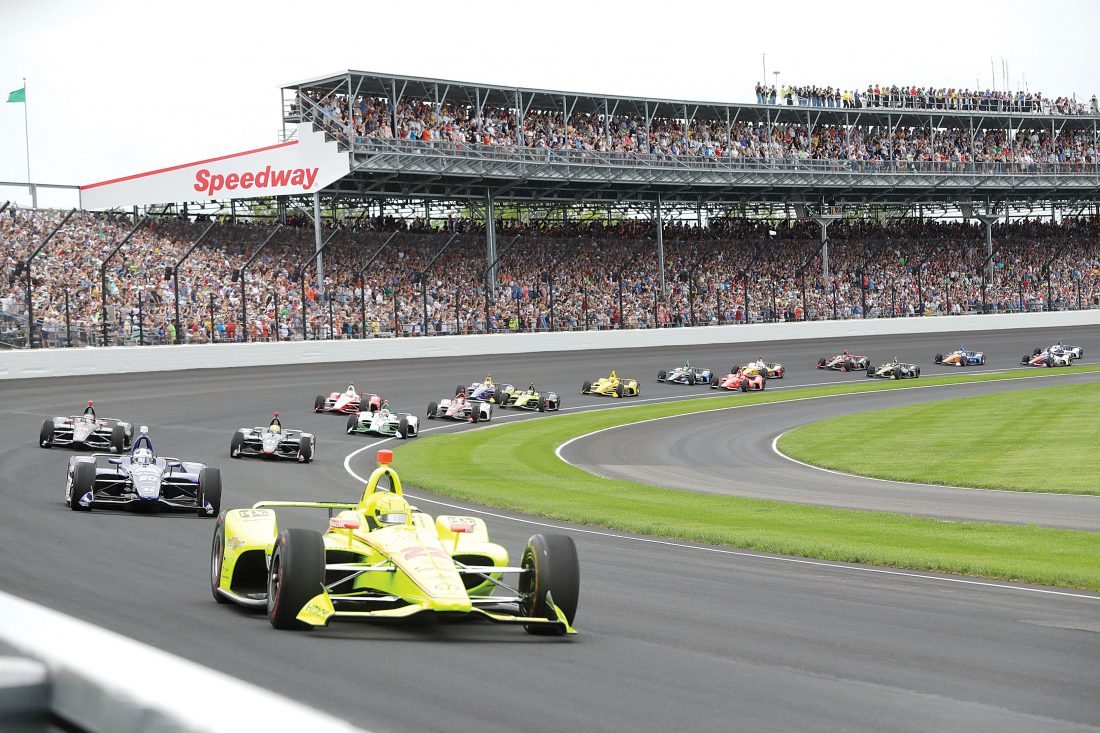 AP Photo Simon Pagenaud, of France, leads the field through the first turn on the start of the Indianapolis 500 IndyCar auto race at Indianapolis Motor Speedway, in Indianapolis.

The Indianapolis 500 was postponed Thursday until August because of the coronavirus pandemic and won’t run on Memorial Day weekend for the first time since 1946.

The race will instead be held Aug. 23, three months later than its May 24 scheduled date.

“However, the health and safety of our event participants and spectators is our top priority, and we believe that postponing the event is the responsible decision with the conditions and restrictions we are facing,” he said. “We will continue to focus on ways we can enhance the customer experience in the months ahead, and I’m confident we will welcome fans with a transformed facility and a global spectacle when we run the world’s greatest race.”

It has been scheduled for that weekend every year since, a familiar fixture for untold millions of fans over the years. Although inclement weather has occasionally disrupted the prestigious race, it had never been outright rescheduled until now.

“In times like this it is all about leadership and communication. We have both in IndyCar and NASCAR,” said Chip Ganassi, who fields cars in both series. NASCAR has not altered its plan to resume racing May 9.

Postponing the Indy 500 was an inevitable decision but still had to be difficult for Penske, who has already pumped millions into capital improvements to ready the historic speedway for its first 500 under new ownership.

“It’s a shame Roger has to go through this in his first year of owning Indianapolis Motor Speedway but you couldn’t have a better man in charge,” said A.J. Foy, a four-time Indy 500 winner and team owner. “It will still be the Indy 500.I never thought we’d see it like this, but all of the sports field has been affected. I’m just glad that we will be able to race.”

Penske Entertainment Corp. President and CEO Mark Miles said the series chose the August date to get away from extended delays caused by the coronavirus shutdown. The series did not choose Labor Day weekend out of fear of disrupting fans’ traditional plans.

The Indy 500 honors the military before the race, and Miles said the August date gives the speedway “a unique and powerful opportunity to honor the contributions and heroism of the doctors, nurses, first responders and National Guard members serving on the front lines of the fight against COVID-19.”

Miles also thanked NBC, which took over broadcasting the marquee race just last year from ABC. NBC is already scrambling after this week’s postponement of the Tokyo Olympics to 2021; the games had been scheduled to open July 24 and run for nearly three weeks.

Penske had been eagerly anticipating the March 15 start of the IndyCar season, but was forced to suspend the series 48 hours before the scheduled opener in St. Petersburg, Florida, when the coronavirus was declared a pandemic.

Four races were initially scrapped and IndyCar said it would resume racing May 9 on the road course at Indy. The opening race is now listed as May 30 at Detroit, but the schedule is in flux.

The Indy road course race will now be run on July 4, a day before NASCAR races at The Brickyard in an unprecedented doubleheader between the series. St. Pete now is listed at the bottom of the schedule with no date listed.

Miles said if the race can be rescheduled, it would be as the season finale in October.

Races at Barber Motorsports Park in Alabama, Circuit of the Americas in Texas and Long Beach, California will not be rescheduled. IndyCar moved the August race dates for Mid-Ohio and Gateway outside of St. Louis, while Portland was moved from Labor Day to one week after.

As for the 500, the new schedule will begin with practices Aug. 12-13, followed by “Fast Friday” on Aug. 14 and weekend qualifying. The following week is dark until Aug. 20, with the final Indianapolis 500 practice on Friday, Aug. 21 as part of Carb Day.

BERLIN (AP) — Leipzig seemed to enjoy playing in an empty stadium with no protesters as it routed host Mainz 5-0 ...

PARIS (AP) — Tennis, anyone? Not Sunday at the French Open. Nobody was there. Maybe they will be in ...

CHICAGO (AP) — Growing up in a rough part of Chicago’s South Side, Saint Wilkins figured he was headed for a ...

(AP) — Some NFL quarterbacks are still finding ways to hold throwing sessions with receivers during the ...