Kyle Busch not his usual dominant self at Bristol this time 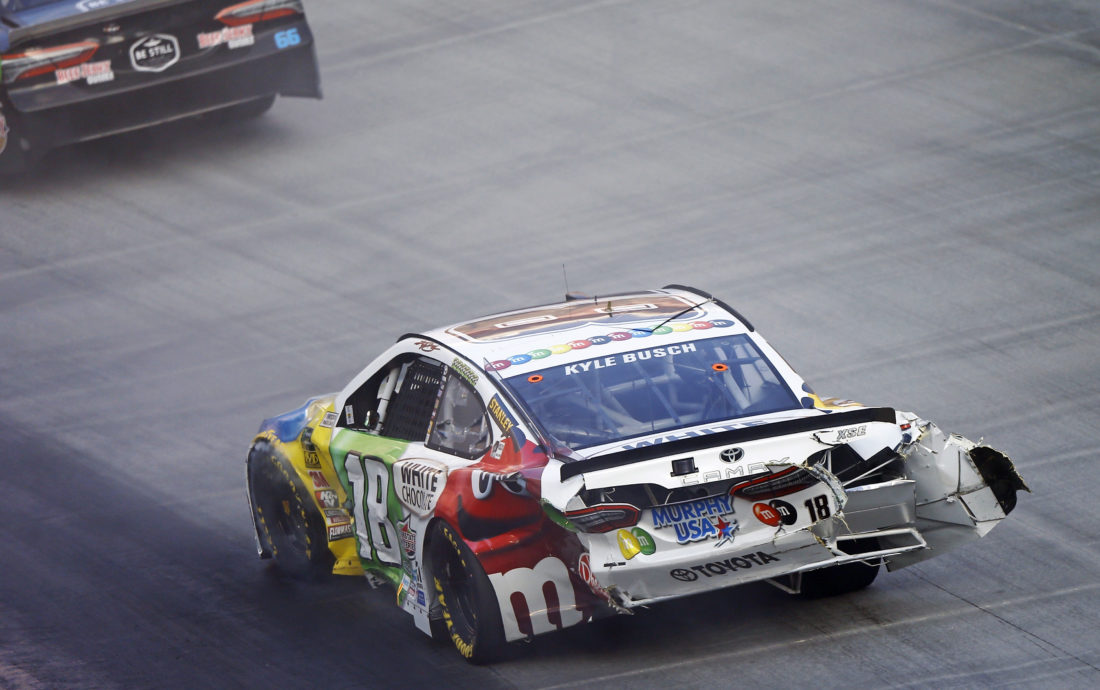 Kyle Busch make his way around the track after being involved in a crash during the NASCAR Cup Series auto race Saturday, Aug. 18, 2018, in Bristol, Tenn. (AP Photo/Wade Payne)

BRISTOL, Tenn. (AP) — Kyle Busch had cars strong enough to contend for his third sweep at Bristol Motor Speedway. Instead, he had two eventful races and left the track without a win.

Busch arrived at Bristol trying to add to his career 21 national victories on the bullring. He led the Xfinity Series race Friday before an early accident knocked him out. He faced even more ups and downs Saturday in the Cup race.

Busch, looking to win a Cup event at Bristol for the eighth time, started a 15-car wreck on the second lap. He later made contact with Martin Truex Jr. to knock his championship rival out of the race, and finished 20th after his damaged Toyota spun to bring out the final caution of the race.

“It just wasn’t meant for us this weekend, I guess,” Busch said.

That Busch was even challenging for the lead near the end of the race marked a stunning turnaround after such a dispiriting start. It underscored the tenacity of the Joe Gibbs Racing team almost as much as any of Busch’s six Cup victories this season.

The race had barely started when Busch’s car drifted up the banking, bounced off Ryan Blaney’s car and spun in front of much of the field. Busch’s car was affected enough that he could have just called it a race. He was two laps behind and seemingly had little chance of getting back in contention.

The points leader already is locked into the playoffs, so finishing Saturday night was about pride and his love of Bristol.

Busch gradually worked his way through the field and was back on the lead lap by the start of the final stage. Before his final spin, Busch believed he had a realistic shot at a come-from-behind victory.

“That was just me and this team and never giving up and being able to drive up through the field like that,” Busch said. “(Our car) was fast, even torn up and wrecked and everything else, it was fast.”

Busch was in third place when he closed onto Truex’s bumper, causing Truex’s car to spin and hit the outside wall. Busch blamed himself for the wreck that ended Truex’s hopes for his first career short-track victory.

“I didn’t think I was next to him yet, and I clipped him and sent him for a whale of a ride,” Busch said. “Hopefully, he’s all right and everything is OK there. I hated that I clipped him, I know he could have had a good shot to win the race, too.”

One night earlier, Kyle Busch led the Xfinity race for the first 70 laps until a flat tire caused him to hit the wall and knocked him out of the race.

“The car was really good yesterday and it got in the wall, and three laps later it had a flat tire,” Busch said. “And today I wasn’t even pushing that hard, I was just trying to maintain and not get hit, and I ended up sliding up the racetrack and spinning myself out.”

Busch had been aiming to win both weekend events at Bristol. He has done that twice before, in 2010 and 2017.

Even on a weekend in which he didn’t post his usual results, Busch still displayed the qualities that make him one of the circuit’s most polarizing and powerful drivers.

He dominated the Xfinity race up until his exit, then showed his frustration through his facial expressions during a brief post-race interview that instantly caught fire on social media. He was greeted by a chorus of boos after choosing DJ Khaled’s “All I Do Is Win” as the song to accompany his introduction Saturday, then threatened to produce one of his most unlikely wins of all.

Busch likely didn’t gain any more fans with his role in forcing Truex out of the race. He said afterward he meant no harm and added that he should send a cake to Truex’s crew as a form of apology.

“They’ll probably throw that one away anyways,” Busch quipped, “but it ruined their day from being able to get a win or even a second.”

Busch leads the points standings with two races remaining before the playoffs begin.

Bryant and Philly: From hero to traitor to beloved

PHILADELPHIA (AP) — Jeered like a traitor just a few miles from the high school where he won a state title, Kobe ...

(AP) — With the Olympics six months away, the president of wrestling's international governing body says the ...

Logjam at top of Pacific makes for intense playoff push

ST. LOUIS (AP) — The Pacific Division is proving to be the wild, wild west of the NHL this season. Vancouver ...

HOUSTON (AP) — Dusty Baker is working to finalize an agreement to become manager of the Houston Astros, a person ...

HARTFORD, Conn. (AP) — Kobe Bryant always had an interest in women's basketball, one that he shared with many in ...

Reeling Timberwolves try to pivot away from record collapse

MINNEAPOLIS (AP) — Minnesota Timberwolves coach Ryan Saunders was eager to work after a restless night, a lack of ...