Man of his word 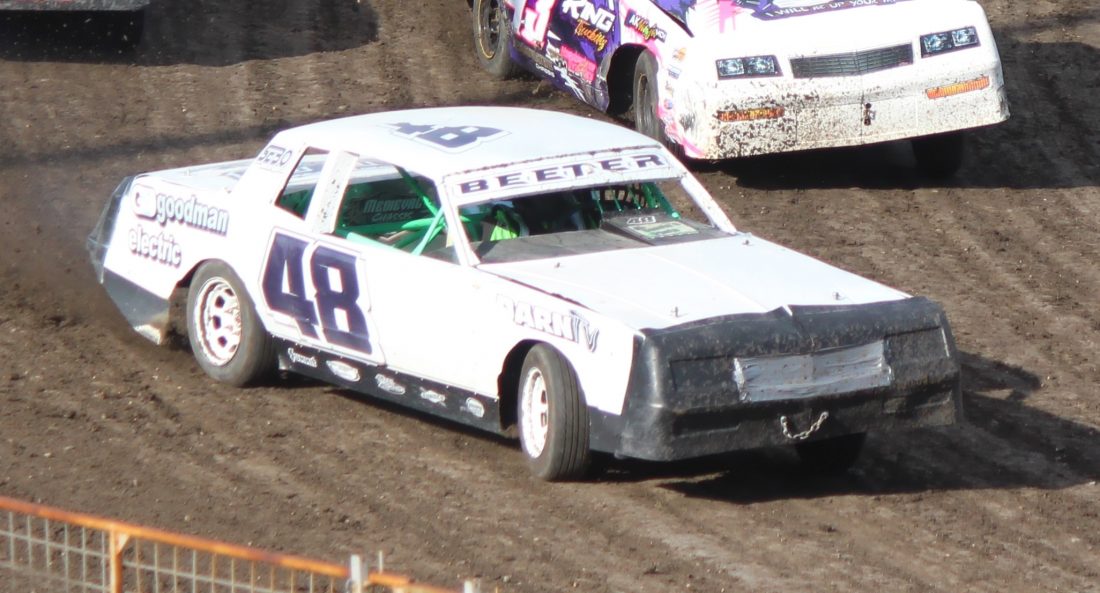 Alex Eisen/MDN Brock Beeter drives his No. 48 IMCA Hobby Stock in a heat race earlier this season at Nodak Speedway.

Here is how Hulberg managed to get himself in this extraordinary situation.

Brandon Beeter, the Nodak Speedway president and flagman, was the first person to greet his brother Brock Beeter when he pulled into the winner’s circle with his No. 48 machine last Sunday night.

Leaning into the driver’s side window, Brandon tried to forewarn Brock on what was about to happen once he climbed out of the car.

“My brother stuck his head in, and he goes, ‘Are you ready for this?'” Brock recalled. “I was like, ‘What do you mean? Ready for what?’ And he goes, ‘They aren’t happy. These fans aren’t happy.’ I said, ‘Really? It wasn’t even that bad.'”

Multiple sections of the crowd began to boo as Brock Beeter emerged from his hobby stock and started celebrating his first win of the season at Nodak Speedway. Beeter, in the back of his mind, knew why they were voicing their displeasure.

On lap No. 10 of the main feature, Jesse Long spun around with Beeter on his bumper. Beeter admits that he did make contact with Long, and would have accepted fault for the caution, but the verdict from the race officials deemed Long had lost control on his own before Beeter made contact.

Beeter kept his spot on the track and went on to win the race.

“It all happens in a bang,” Beeter said. “I was on the brakes, and it wasn’t enough. I did hit him. If they would have put me in the back, then OK. But they didn’t. If I don’t win, this isn’t a story, and nobody would have cared.”

Beeter had no choice but to address the vocal crowd in his victory speech.

“It’s tight corners, they slide up in front of you, sideways in front of you and you’re on the brakes… I don’t know,” Beeter said over the public address system. “If you guys want to jump in, I’ll donate the car to you. Get in and let’s see how easy it is. I’m just saying. I don’t race dirty, never have. It is what it is. It’s racing.”

During the intermission that followed, Hulberg decided — for entertainment purposes — to pour some gasoline on the fiery situation.

“I was just thinking about what Brock Beeter said, where we could drive his car if we wanted to,” Hulberg said over the grandstand speakers and on the DARN TV live stream broadcast.

Larry McFall, a Nodak Speedway Hall of Famer and Hulberg’s broadcast partner, interjected: “Yeah, but we weren’t the ones booing him. He said if we were the ones booing, we could show him how it’s done.”

Hulberg continued in jest: “Baloney, I was up here booing more than anybody. I was like, ‘Boooo.'”

McFall, speaking facts, said: “You weren’t booing at all.”

Hulberg rebuttal: “When I thought I could drive his car, I was a little bit.”

McFall and Hulberg laughed off the exchange and went on to call the rest of the feature races on Sunday night. Then, on Monday morning, Hulberg was caught off guard when he saw Beeter had left him a voicemail.

“He basically said, ‘Give me a call if you want to drive this car hotshot, it’s yours. I wasn’t bluffing,'” Hulberg said. “I called him back, and we both had a chuckle about it. Then he said, ‘Well, you going to drive it?’ I said, ‘Hell no, I’m not going to drive it.’ He says, ‘Well, you publicly went on the record and said you were going to, and I’m giving you the chance to do it.'”

Backed into a corner, Hulberg suggested that he might not even fit in the car. So, Beeter invited Hulberg over to his shop, and they debunked that excuse earlier this week.

“I sat in the car, and sure enough, I fit enough that I can race that thing this Sunday night,” Hulberg said. “We are going to make it happen.”

Hulberg hasn’t raced anything before, but grew up going to Nodak Speedway and has fond memories of doing laps with his Honda CRF450 dirt bike through the trees around a small farmland dirt track.

“I’m a little nervous, I’m not going to lie,” Hulberg said. “When I was sitting in Brock’s car, I immediately gained a whole new level of respect for the guys that already do it. My adrenaline is already going because I don’t want to be in the way of anybody down there, and I don’t want to embarrass myself. I don’t want to be the cause of a major wreck, which is going to cost a bunch of people money.”

Beeter isn’t too concerned if Hulberg ends up wrecking his car, which he built himself using mostly spare parts for roughly $3,000.

“It’s just a race car,” Beeter said. “I have built 10-12 cars. I can fix it. He is not going to wreck anything that I can’t fix. But, I told him not to be stupid and don’t wreck somebody else’s stuff. I couldn’t care less about mine.”

Hulberg is doing his best to deflect the possibility of crashing Beeter’s car.

“Even my dad asked me what happens if I roll that race car and total his car,” Hulberg said. “I’ll tell you the same thing that I told him. I’m more worried about what I’m going to say in victory lane with my speech… I’m 1,000% kidding, obviously. But I’m thinking positive about it.”

As for a more realistic expectation, Beeter offered his opinion.

“I was 13 years old when I sat in the car for the first time and I was slow as (obscenity). But, in the moment of sitting in that seat and cars all around you, you think you are going fast,” he said. “You then realize you were only doing 30 or 40 (mph). What the (obscenity)? I do at least 65 down the highway. So, how is he going to do?

“Heat race, I think he is going to be on the verge of being lapped. Feature, he will get lapped, and a part of me thinks he will get nervous and pull into the pits. What is going to scare him the most is when he gets lapped that first time… Those cars are going to fly by him because they’re going to be in a race, and racing their hearts out.”

While Hulberg attempts to drive around Nodak Speedway, Beeter — voluntarily giving up third place in the season point standings — will be taking Hulberg’s place in the press box to call the action alongside McFall.

“I figured we would have some fun with this,” Beeter said. “I’m certainly not heartbroken about getting booed. It is what it is. If they’re making noise, booing or cheering, then you are doing something right. Look at NASCAR; people boo when Kyle Busch wins a race. But, at the end of the day, the guy is good. I can’t stand Kyle Busch, but he is good. He wins races, so you got to give him credit for that. If they are going to boo me every time I win, well obviously I’m winning, so why am I upset?”