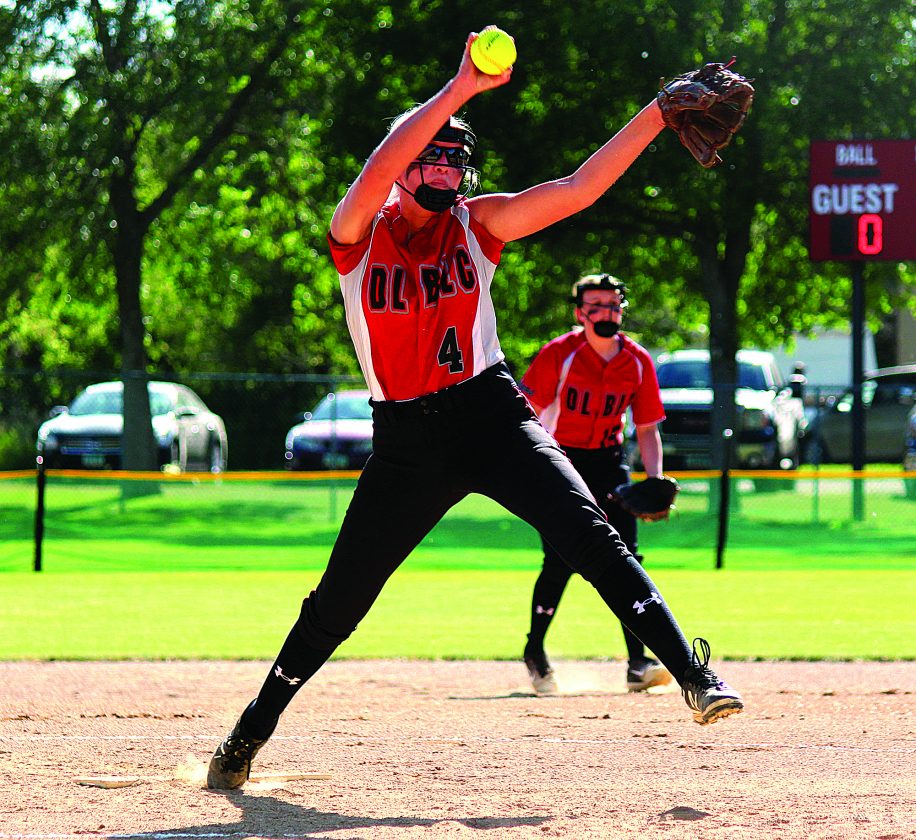 Alex Eisen/MDN Des Lacs-Burlington/Lewis & Clark senior pitcher Erica Hermanson (4) winds up a pitch Wednesday evening in Burlington. In the first game of the doubleheader, Hermanson struck out nine of the 10 batters she faced.

BURLINGTON — With sunlight beaming directly into its dugout, the Des Lacs-Burlington/Lewis & Clark softball team huddled underneath a nearby tree to stay cool in the shade.

Calm and collected, the Lakers didn’t hold anything back when they took to the diamond. DLBLC powered past 10-player Wilton-Washburn on Wednesday by scores of 10-0 (five innings) and 11-8 in Burlington.

After the COVID-19 pandemic canceled the high school spring sports season, this independent Class B summer clash represented the only competitive games played on Burlington’s softball field this season.

It was an opportunity for the seniors to get a final curtain call at home.

“It was a lot of fun to have all of our seniors, the Class of 2020, back and allowing them to play on their home field one more time,” DLBLC head coach Peggy Person said. “We have missed (softball). Whether it’s our field or somebody else’s field, we are just happy to be playing.”

DLBLC starting pitcher Erica Hermanson came out firing in the circle. She struck out the first eight batters she faced before Wilton-Washburn No. 9 hitter Moana Tooke broke up the perfect game bid.

Hermanson, playing with the Lakers for the first time this summer, racked up nine strikeouts while only facing 10 batters.

“I’m so happy that I was able to play with my old teammates again and get the feeling of normalcy… It brought back a lot of memories,” Hermanson said. “I had a pretty good game. I mostly go out there and do the best that I can with my abilities. Tonight, I really just did it for my teammates.”

“I’m ready for the next level experience,” she said. “I’m excited to make new friends and new memories. It’s an odd feeling. I’m more excited than nervous, but I still have some nerves in my system. I hope I can shake that off. But I already know a few of the girls, and I’m super excited.”

Brooklyn Benno replaced Hermanson in the circle and pitched the final two innings. Benno gave up three more hits but kept Wilton-Washburn off the scoreboard.

“Erica (Hermanson) does what she does,” Person said. “Brooklyn (Benno) is solid as nails as well. It’s a lot of fun when you have those two options.”

Offensively, the Lakers scored multiple runs in every inning. Three runs came across in each of the first two innings and a pair of runs followed in the third and fourth innings.

During the intermission between games, the Lakers honored their four seniors: Hermanson, Alyea Casavant, Courtney Sauer and Maura Mills.

“I’ve been playing here since I was in seventh grade, so it felt really good to get back on the field and play with my team for one last home game,” Casavant said. “We worked really well defensively. For not having many practices, we worked well together.”

Wilton-Washburn was able to get the bats going against DLBLC in the second contest of the doubleheader. They came out of the gates with three runs in the first inning off a two-run double by Tori Olson and an RBI single by Katie Olson.

Tori Olson peppered the ball across the field in Game 2 with an impressive 4-for-4 showing, including two doubles and four RBIs.

DLBLC answered with three runs in the bottom of the first to even the score at 3-3. Wilton-Washburn took the lead back with two runs in the top of the second inning.

The Lakers finally broke the game open with eight runs in the bottom of the second. Makenzie Rist, Ava Wille and Autumn Haaland each had bases-loaded walks to bring in runs. Kennedy Limke also delivered a two-run single to push the score out to 11-5.

“I thought we ran the bases well,” Person said. “We challenged them on the bases, and I think that is what makes the difference. When you run hard and you run smart, that leads to a lot of good things.”

A last-ditch rally in the top of the fifth inning by Wilton-Washburn plated three runs. With runners in scoring position, relief pitcher Rist got out of the jam to finish the doubleheader.

DLBLC starting pitcher Camy Benno picked up the win and was the only Laker in the second game to have multiple hits with a 2-for-4 outing.

Taryn Schurhamer went 3-for-3 with a double and an RBI in the defeat.

DLBLC will play again July 8 against Westhope/Newburg/Bottineau and Beulah in Beulah. Wilton-Washburn will host multiple softball games in Wilton on July 8 as well and will play Heart River.

Fewer will attend camp this summer; some camps won’t survive

Crunch, crunch: Africa’s locust outbreak is far from over