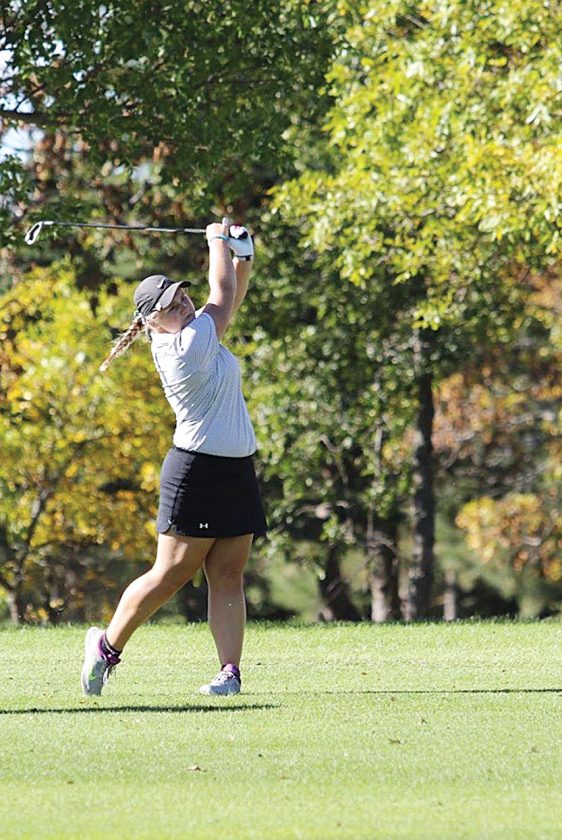 As Kaitlyn Hill progressed throughout high school, college golf was an afterthought. Hill enjoyed representing Bowman County on the links, but volleyball and basketball also captivated her attention.

When former Minot State women’s golf head coach Spencer Hilde sent a letter to Hill, she headed north for a visit. Although she did not feel entirely prepared for the next level, she respected Hilde’s gumption.

“He definitely took a chance on me,” Hill said.

Once she got her feet wet at MSU, Hill came to a conclusion. She needed to overhaul almost everything — her grip, her swing and her overall outlook on the sport.

After her freshman season concluded, Hill worked at the Prairie West Golf Club in Mandan. Gradually, she became a product of her environment.

“I literally did not take a day off,” Hill said. “I did whatever I could do to get better in all aspects of my game.”

A self-taught golfer, Hill was no stranger to the game’s peaks and valleys. Her early days of golf were not as successful as she had hoped, but she gained a sincere appreciation for the game.

“I really did not like it at first,” she said with a laugh. “I didn’t have the patience for it. I was not very good when I first started, but I stuck it out.”

Hill tended to slice the ball, often sending it to the right of her targets. Without initial assistance, she created her own solutions.

“If I was slicing the ball, I would find a way to hit it straight,” Hill said. “I think that’s why I developed the swing that I did. I never had a formal swing coach.”

Those summer days at the practice facility in Mandan helped Hill refine her craft. She met with Hilde on occasion and kept an open mind about her future.

She became a sponge, always ready to absorb new tactics.

“Anybody who had information for me, I was willing to take it and try it out,” Hill said. “I was soaking in anything I could get.”

She recorded a scoring average of 87.6 strokes and shot a season-low 81 at the Mustang Invitational in Marshall, Minnesota. Her sturdy belief in her game overwhelmed her prior zealousness.

“I just thought that I should be really good right away,” Hill said. “Obviously, that wasn’t the case. It took a lot of time and effort to get better.”

Finding balance became a critical facet of her game.

“I just have really high expectations for myself,” Hill said. “When those (expectations) don’t always work out, I get a little frustrated. It’s definitely improved since I came to Minot State.”

Her senior campaign was halted due to the COVID-19 pandemic, but she found success during her junior year.

Hill played in seven events, posting a season-low round of 79. She finished as the fifth-best scorer on the team, tallying a scoring average of 86.6 strokes.

Although current MSU head coach Kyle Knutson joined the Beavers toward the end of Hill’s career, her hunger for success became apparent.

“It’s that pursuit of perfection that really drove her and allowed her to get a lot better as she played,” Knutson said. “You’re going to have days that just don’t work out. If she does have a bad day, she’s on the range and puts in the work. It definitely showed. She had some really good rounds for us.”

At the NSIC Championships in Morton, Minnesota, she finished tied for 34th place.

“She wants to get better all the time,” Knutson said. “You see that in golf and her academics. That’s the thing that kind of stuck out to me — that improvement.”

Back in January, Hill earned the Myles Brand All-Academic with Distinction Award, which recognizes seniors with a cumulative GPA of 3.75 or higher. She was one of three MSU student-athletes (Ellis Parr, Shae Pedersen) to earn that recognition.

Her intellect carried over to the golf course. As Hill applied her knowledge, Knutson helped her realize the importance of enjoying the sport.

“Sometimes, I forget that I love this game,” she said. “At the end of the day, that’s why I continue to play. There’s always going to be something from your round that’s going to keep you coming back. Just trying to focus on the positives and look past the bad hits.”

Keeping that calm, collected attitude benefitted Hill in the classroom. Her mentality also helped her reach new heights on the fairways.

“I’ve definitely become a completely different player than I was in high school,” she said.

She maintained her cool and improved through intrinsic motivation.

Because Hill wanted to achieve consistency, Knutson knew he could find her at the driving range. Her aptitude planted the seeds for success.

“The big thing that I took away from her is just how hard she works at everything,” he said. “A lot of players want to take the rest of the day off. She’s back on the range.”

With her abridged senior season in the rearview mirror, Hill opted for graduate school.

In March, she accepted an opportunity at Concordia-St. Paul.

With her corporate fitness and wellness management degree in tow, she will pursue a doctorate in physical therapy.

“It was stressful for a while, not knowing if I would get into graduate school,” Hill said. “Now that I got in, it’s a lot of relief taken off.”

The pandemic caused Hill to feel uncertain about her future, but she received an offer for the position just hours after her phone interview. She accepted without hesitation.

In a sense, that uncertainty parallels Hill’s thoughts after stepping on MSU’s campus for the first time. She looked forward to a collegiate golf career, but did not foresee all the work that lied ahead.

As she reflected upon her four years of college, she recognized her fellow seniors for their contributions to the program’s culture shift.

“When we came to Minot State, women’s golf was almost like a joke in the conference,” Hill said. “They were not really great in the years before we came. We worked really hard to change that. I can confidently say that we did.”

As she begins her journey in Minnesota, she feels comfort in leaning on her former teammates for support. They showed a willingness to improve for the good of the order.

Perhaps most importantly, Hill proved that notion to herself.

“We left our mark,” she said. “Not only on Minot State, but on the conference. We proved that Minot State is a force to be reckoned with.”