A conversation with Pete Stenberg 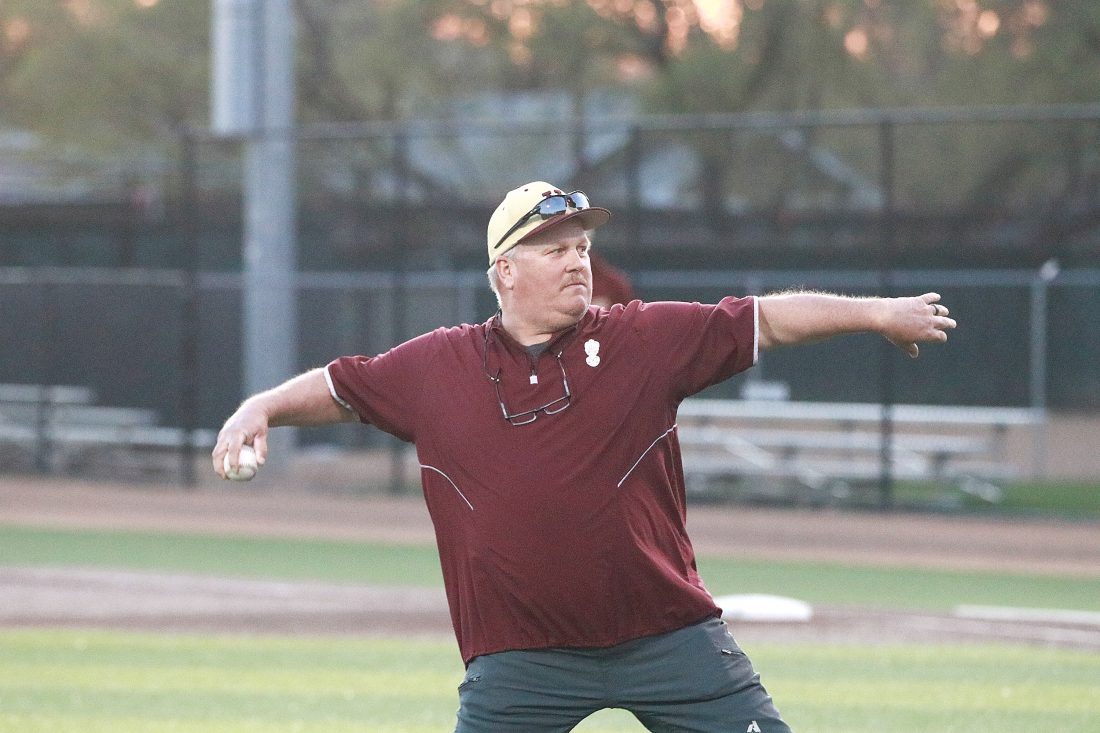 Jimmy Lafakis/MDN Minot High School baseball head coach Pete Stenberg throws a pitch at Corbett Field. Due to the COVID-19 pandemic, the Magi were not able to play the 2020 season. The team’s seniors gathered at Corbett Field on May 1.

Pete Stenberg is the head coach of the Minot High School baseball team.

Recently, the Minot Daily News chatted with Stenberg about what his coaching career has taught him, his love for the Minot community and his passion for other sports outside of baseball. Some responses are edited for brevity and clarity.

MDN: How are you dealing with the absence of baseball?

PS: It’s been the first time in 39 years that I haven’t had a spring baseball season. I played it in high school as a freshman and in college. I started coaching right after that. It’s definitely been a unique spring for me.

I see it differently than the (2011) flood or a 9/11-type shutdown. Everything looks so normal. Outside, you go around and the fields are green. The fields are ready to go. You just don’t see the activity of the kids and the families out and about at the ballpark. It’s been really different.

MDN: Do you have a message for your seniors?

PS: I told them, ‘Don’t let this define who you are. You guys have been playing this game that has taught you a lot about life. This is just one of the steps of life. We’re going to get through this. It’s going to be a bump in your road, but you have a big story to tell from here on out. This will be one of the things that you’ll be able to describe to your kids and tell them how you made it through it, continued on and maintained a positive attitude. You just waited for the next time you could step out on the field and enjoy a game that you love.’

MDN: What do you believe Magi baseball represents?

PS: It’s an extension of my family. My family looks at the kids who are playing for me as part of our family. We treat them that way. We like to try to teach them that it’s a game where you rely on your teammates. It’s a very challenging mental game, so you have to stay positive and pick each other up when others are down.

Just like in life, you need to pick your friends and your family up to help them through trying times. That’s one thing that baseball does. It’s a game of negatives. If you can stay positive and find the good things that you’re doing and have a short-term memory of your last at-bat or your last error, that’s a good thing in life. You have to move on. You have to continue on.

MDN: What went into the decision for the seniors to meet up at Corbett Field earlier this month?

PS: Well, I just thought the boys needed to have one more chance to be there together as Minot High (players). I know they’re going to have summer ball coming up, but not all the players participate in that. Minot High has been a big aspect of their lives now for 12 years. It’s a nice time to think about the past, think about the things that you’ve done and think about all the good times that you’ve had.

It’s not so much the wins and losses, but it’s being able to be out there with all of the seniors that you’ve grown up with playing baseball. Some are new, and some have moved on. The main nucleus was there. They’ve been playing together ever since they were 9 years old.

MDN: In your opinion, what’s the significance of Corbett Field?

PS: Everybody says when they walk in and hear the announcers say, ‘Welcome to beautiful Corbett Field — home of the Minot Vistas, home of the Minot High Magicians,” it is a place of beauty. It’s something that Minot has taken great pride in as a baseball community. Mike Littler back in the day, and Eli Anderson before Mike Littler.

Pride was taken to make sure that the playing facility and the playing surface was in mint condition for our athletes. They have a great place to play, a safe place to play and they can be proud of the facility that they have. The Minot Park District has done that for many, many years.

Now, we have an absolute gem of a field with the new turf on it. Minot is very lucky to have a facility like that for our youth to play on. Our young men.

MDN: Do any memorable seasons of Magi baseball stand out for you?

PS: You know, each season kind of writes its own story. One group of guys back in 2005 were state champions. We ended up going 37-2. Just to get in 39 games was amazing, and we ended up going 37-2 with that. We (10-run ruled) our way through the state tournament. That’s one season that stands out.

There are so many different things. It’s not so much the wins and losses. When the players come back in town, they see you at the ballpark. They say, ‘Hey, Coach. How have you been? Nice to see you. Thank you for all you’ve done.’ I’ve been around a long time. I’m now coaching former players’ children. They’re putting them into my hands. That’s quite a responsibility, but it’s also an honor that they’re willing to do that.

MDN: Are there any particular lessons you’ve learned over your years of coaching?

PS: The biggest thing — you want to make sure that the kids are having fun. It’s not about me. It’s not about the state championships. Those are awesome, but it’s about the kids learning things in life that they’re hopefully going to be able to teach their children to do. You’ve got to make it about the players, because they’re the ones that are living their youth right now. You don’t want to spoil that. You want to have them enjoy it as much as I did when I was younger.

I eventually took that on as a career. I’d like to see all my athletes do something like that, whether it’s coaching baseball or another sport. Give back to the game they grew up loving. Hopefully, they can do that sometime.

MDN: What do you like to do outside of coaching?

PS: My son graduated last year. I’ve been following him and coaching him for many years in football, hockey and baseball. I still find myself going to Minot High and going to all the boys and girls basketball games and the volleyball games. I just follow the athletics around town. That’s part of me, just going out and taking in Minot State basketball, wrestling and football.

We made our vacations around athletics. We continue to do that. My daughter used to be a soccer goalie. I didn’t get to see a whole lot of her games because I was coaching in the spring, but I still enjoy going to watch (soccer). When she was a senior in high school, the state soccer tournament was in Jamestown and the state baseball tournament was in Fargo.

That’s where I went to school, so I had a buddy there. I borrowed his vehicle and I went back and forth between their games and our games. Going down I-94, I was able to watch all three of her games and still coach in all three of mine.

MDN: Are there any professional teams you like rooting for?

PS: I’m a Boston Red Sox fan, as far as baseball goes. Chicago Bears for football. I’m not a real NBA fan, but I do enjoy watching it once the playoffs get started.

MDN: That’s about it. Would you like to add anything else about baseball or coaching?

PS: I want the community to keep staying positive. We’re going to get over this. We’ve just got to take baby steps, work through it and let the kids be kids. There’s going to be some hills and valleys, but you just take those one day at a time. We will continue on and make it through everything.