A conversation with Jim Grote 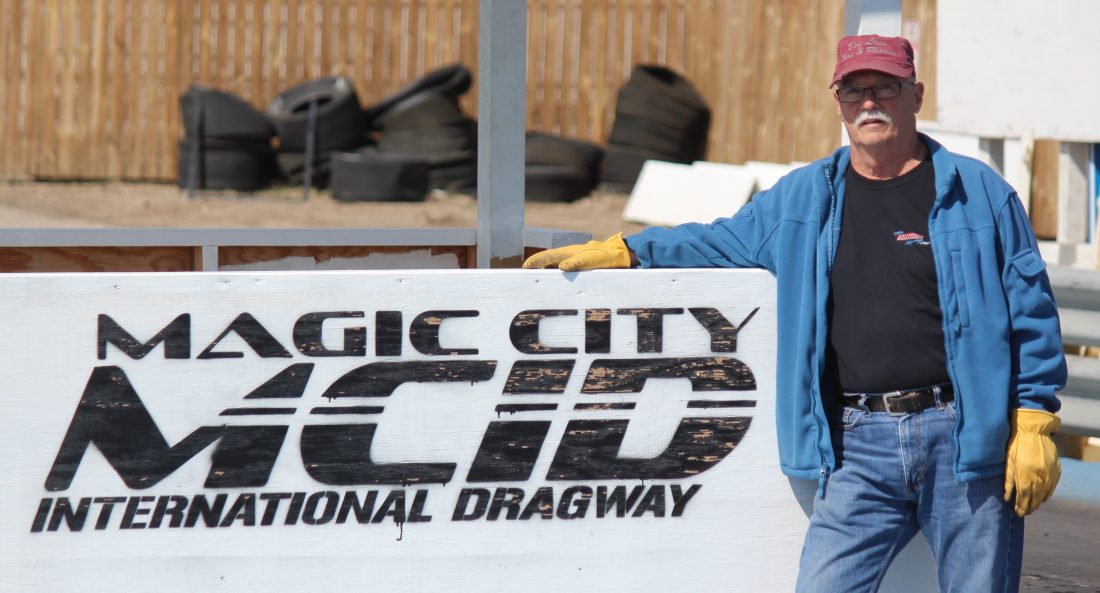 Alex Eisen/MDN James "Jim" Grote, one of the owners of the Magic City International Dragway, poses for a photo at the start of the dragstrip at the North Dakota State Fairgrounds in Minot.

James “Jim” Grote is one of the owners of the Magic City International Dragway.

The Minot Daily News chatted with Grote recently about the possibility of racing this season, his backstory and favorite memories at the dragstrip as well as advice for adrenaline seekers interested in joining the sport. Some responses are edited for brevity and clarity.

MDN: To start off, what’s the current state of the dragway heading into this season?

JG: Well, so far this year, we haven’t been able to open yet. We are waiting for the other states that have the quarantines going on. We get racers from Minnesota, South Dakota, Montana and Canada. And if they come over here for a weekend, they are quarantined. They go home, and they are quarantined. So, we are at a loss on that.

A high percentage of our customers and racers come from Canada. We want to get them down here because two of their dragstrips have already closed for the season. So, they’re going to need a place to race.

Right now, if we would start our point races, our Americans would have a horrible advantage because the Canadians can’t be down here.

So, we don’t know where we are at least until June.

MDN: What are the next steps moving forward then?

JG: We are waiting. We are also waiting to find out from the governor about (what to do with) our crowds and staging lanes full of cars. It’s extremely hard to get people to move apart. They tend to gravitate toward each other to talk about their cars, families and everything else.

We have junior dragsters here, and those families are really tight. They help each other.

Then, when the cars are coming up to the line, we have what we call a bullpen. So if a racer has a crew member or something like that, they would stand over there. We get like 20-25 people over there.

MDN: Is there a fear that you might not have a season?

There are three of us who are partners (and owners) of this dragstrip, and I can tell you right now that we will never ever say die. We will have a season. We don’t know how long it’s going to be or how short it’s going to be. But, we will do whatever it takes and go by whatever rules they have.

As long as they allow us to race, we will race.

MDN: How did you get involved with drag racing?

JG: It was a product of having an older brother, growing up in New York and having a dragstrip not that far from our house. I guess when I was very young, I felt the need for speed. I loved it.

I graduated from high school and went right into the Air Force. So, drag racing was something that I just watched. When my wife, my son and I came back from Europe after four years, we ended up in Las Vegas. We went to the drag races out there all the time.

My wife told me that I should build a car. We pondered over it for a little bit and low and behold, I got orders for Vietnam. So, that ended that.

After Vietnam, I ended up in Montana and there was only one little track up there. I bounced around a little bit more and ended up here in Minot at the civil engineering technical service center.

My wife and I always volunteered to come down during the state fair to help with anything that we could. We loved the fair. One day I was supposed to be working the gate over here, and that was when this was built. One of the then-owners came over and asked if I was a volunteer.

So, I helped him set up. He says, ‘Now, I want to teach you something. When the cars come up, just flip the switch (for the lights).’ I became the starter. I stayed here for several years and worked my around the track.

Then, I got into a car accident on Broadway, and my doctor didn’t want me anywhere around (the dragstrip) because of my vertebrates being bolted together. My wife told me to buy a boat and go fishing. So, I stayed away for some years.

Later I got a call from an ownership group that got together to buy this from the people that built it. They asked if I wanted to be a part of it and I said sure. That was around 2007 or 2008.

The ownership is down to just three of us now. It works really well between Cory Evenson, Pat Keating and I. We all have our own lanes and know what we have to do. And I think we are all really good at what we do. We love it.

MDN: Do you have any favorite drag racing memories?

JG: Last year, as a matter of fact, Street Outlaws’ Jeff Lutz came here. He spent the whole weekend here with us. He is one of the nicest guys you’ll ever meet.

MDN: Any other ones that stand out?

JG: I have the memories of watching the junior dragsters, the young kids. We watch them become very good and see them move up into full-sized dragsters and full-sided door cars. It’s really nice. It doesn’t make you feel old, it makes you feel proud that you gave them a place to come race.

I can speak for the three of us (owners) that we would love to get more street racers down here rather than them being out on the streets.

MDN: What’s your message to people who are interested in drag racing but don’t know how to get started?

JG: I would ask them to come down to our tech and registration trailer (during the season). Talk to the person in the window and say, ‘I want to learn how to drag racing, and I don’t know anything about it.’

We have men and women that will do ride-alongs. They will put you in their car with them, so you can see what it’s like to go through staging, the starting line and everything else.

They could also get in your car with you, so they can help you with your own car. Also, if you want to go down the track by yourself, let us know in advance and we won’t put a second car up on the track. That way you can race your own race.