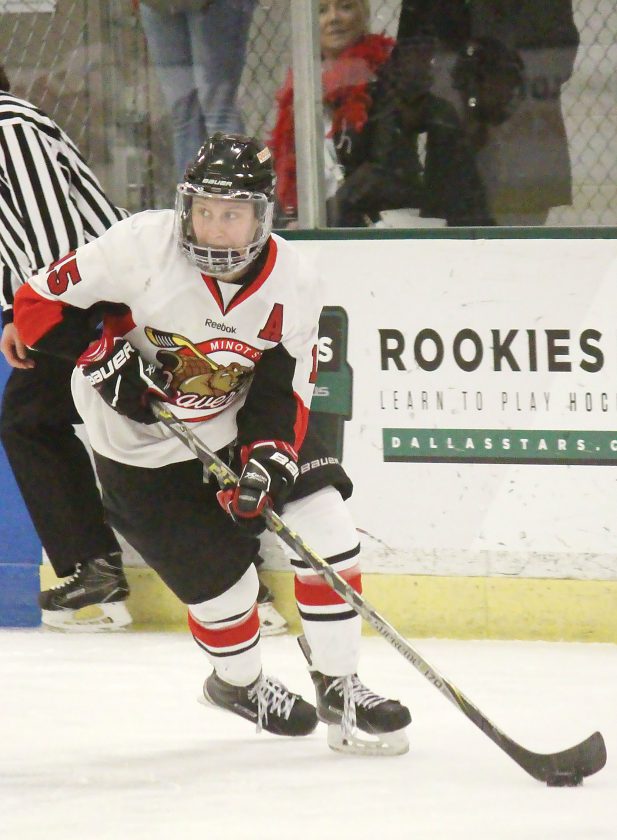 The Minot State women’s hockey team, for a second straight season, was forced to watch a championship celebration from across the rink.

MSU forward Mackenzie Balogh skated off the ice with a dejected look on her face. The agony of falling short in back-to-back national title games was unmistakably visible. A dream shattered, again.

Implausibly, a year later, Balogh and the Beavers are enduring an even worse feeling due to a global crisis that is entirely out of their control.

The cancellation of the 2020 ACHA National Tournament because of the COVID-19 pandemic ripped away MSU’s next opportunity to set things straight and finally capture that elusive national title — doing so in the program’s first season at the Division I level, nonetheless.

The unknown of what could have been for the No. 2-seeded Beavers is what stings the most.

“Not knowing and not getting that chance hurts way more than taking those two losses,” Balogh said. “I would go back into those games any day, rather than have the opportunity taken away from us.”

Yet, in this challenging time, overcoming adversity is nothing new for Balogh.

One of the boys

Growing up an hour and a half north of Estevan and roughly two hours east of Regina in the small town of Kipling, Saskatchewan, Balogh didn’t have a lot of options when it came to getting ice time in her Canadian hometown.

Balogh would lace up her skates and compete with the boys.

“That’s all that we had,” Balogh said. “If I wanted to play with the girls, then I would have had to travel two hours one-way to play and practice. That didn’t really work for us, and I enjoyed playing with the boys. I think I am a better hockey player because of it.”

Being the smallest player on the ice, Balogh had to fight for everything.

“It made me tougher,” she said. “I’m pretty small, only 5-foot-2, and all the boys were much bigger. So, I had to be able to stand my ground. It taught me how to go into the corners, get the puck and be strong on my skates.”

Balogh made the jump to play competitively on the girl’s junior hockey circuit in 2014 by joining the Melville Prairie Fire in the Saskatchewan Female Midget AAA Hockey League (SFMAAAHL).

Balogh led the now-defunct team in points across two seasons. In 64 games, she finished with 45 points (23 goals, 22 assists) and caught the attention of an informal scout: the father of Prairie Fire alumna Vanessa “Fanny” Grimstad.

“I didn’t really have anywhere to play hockey,” Balogh said. “(Grimstad’s) dad came to my AAA game because Fanny also played there before I got there. He was doing a little bit of recruiting — asking if I had anywhere to go and if I would consider Minot State because they were trying to rebuild the program.”

Minot State was an ideal fit.

“They had the (school) program that I wanted, and it was just a bonus that I got to play hockey,” Balogh said. “I didn’t really know what type of hockey it was when I was signing up for it. I was just excited I could keep playing hockey while I was going to school.”

One of the rebuilders

When Balogh arrived, the Minot State women’s hockey team was in a state of disarray. The Beavers hardly had enough bodies to compete.

“There were games we were playing with like eight girls because some girls couldn’t come on road weekends because of school and things like that,” Balogh said. “It was different, but a lot of fun. We were really close that year and were the first team to make nationals.”

With such a small group, sometimes getting a quick breather came at a cost.

“A couple of us had to take penalties so that we could get a little break during a game,” Balogh said. “It was a good experience. It was a lot of fun to play like that. My first year wasn’t too serious, so we were laid back and just had fun with it. It was interesting, for sure.”

Then entered new head coach Ryan Miner, a former MSU men’s hockey player, who helped speed up the process of getting the Beavers out of the shadows. He could tell from afar that Balogh was destined for greatness.

“Just watching her at the rink, the talent was there, and it was incredible to watch,” Miner said. “At the Division II level, she was skating circles around people. She was the most dominant player on the ice every shift. She also helped her teammates a lot and made them better as well.”

“Honestly, I’m surprised she ended up here,” Miner said. “In my personal opinion, she could have easily played at a higher level at that time. Obviously, we are really competitive now. But, when starting off, it was surprising to see her here with the talent she had.”

“We were dominating in a league that was growing, just like our team was,” Balogh said. “(My) junior year is when it really started to take off. With Miner as the coach, we did a lot of recruiting and had way more girls. A lot more depth.”

Two championship defeats, however, did leave a scar. The Beavers swiftly left those painful memories in the past by moving up the ACHA ranks from Division II to Division I. Doing so just in time for Balogh’s senior season.

One of the devastated

Minot State’s largest roster to date offered more depth at the expense of having to earn playing time. Three years ago, that would have been an unthinkable predicament.

Regardless, Balogh remained a staple in the Beavers’ lineup. She still managed to average a point per game at the Division I level, scoring 12 goals and providing 14 assists in 23 ACHA games.

“She will go down in our history books as one of our top players in our program’s history,” Miner said. “That is attributed to her work ethic and the things she put into the program. I wish her the best of luck in her future endeavors, in whatever she decides to do this next year.”

Not getting another crack at the national tournament due to the coronavirus has left Balogh pondering her future.

The fifth-year eligibility option to return to the Beavers women’s hockey program for one more season is available to Balogh if she so desires.

“With how this season ended, it left a little bad taste in my mouth,” Balogh said. “So, maybe, considering a fifth year and coming back for student teaching… With student teaching, it’s difficult because you can’t miss too many days of school. So, that’s one thing, I’ll have to talk with the coaches and see how much they’re willing to work with me. I’ll have to figure out the financials as well. Can I afford to come back another year?”

Miner has a roster spot open for Balogh if she decides to return.

“We would be thrilled if she came back for a fifth year,” he said. “Our championship got taken away from us, and I think she really wants to win. Having her back would just be a great addition to our program as we continue to grow.”