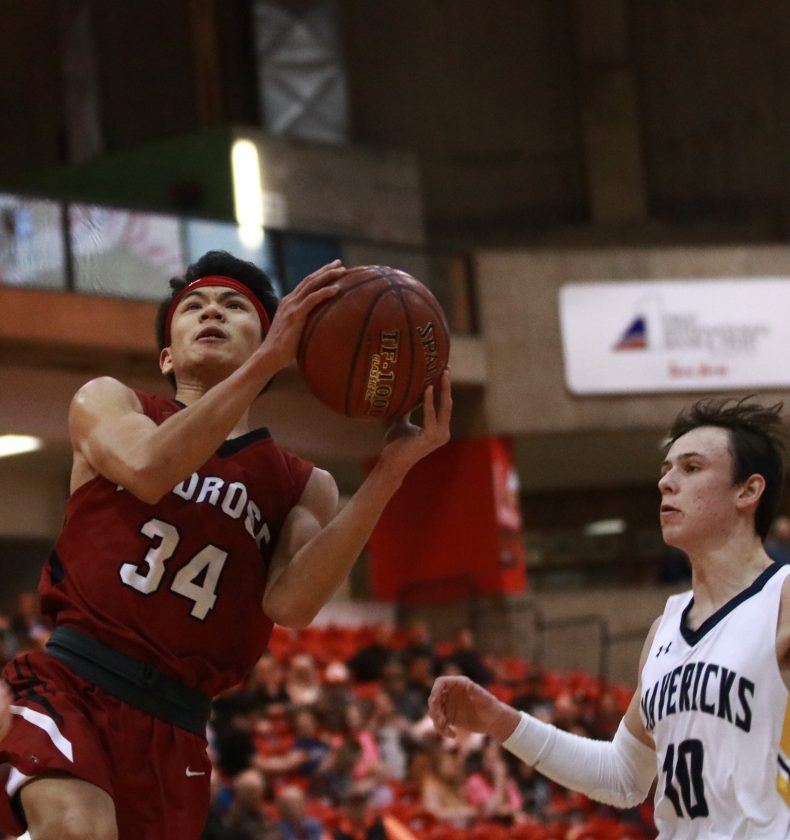 Jimmy Lafakis/MDN Nedrose senior guard Jethro Lauron (34) goes up for a layup over MLS senior forward JayDen Hanson (10) in the fourth quarter of Monday's Region 6 Tournament game at the MSU Dome. The Cardinals earned a 56-53 victory over the Mavericks.

When the going got tough, Jethro Lauron accepted his mission.

As the clock ticked down in Monday’s Region 6 Tournament opening-round game at the MSU Dome, the Nedrose senior guard broke toward the hoop and laid the ball in.

After the District 11 No. 3-seeded Cardinals (13-10) ripped away a steal, Lauron attacked the basket for profit once again.

Both buckets helped Nedrose clinch a 56-53 victory over District 12 No. 2-seeded Mohall/Lansford/Sherwood (10-12).

“We’ve been working hard all season,” Lauron said. “It paid off, for sure.”

Lauron grew up in the Philippines and moved to America as a sophomore. As a young player, he admired former Los Angeles Lakers guard Kobe Bryant.

With “8” and “24” written on his Nike shoes, Lauron gave the Cardinals one final boost.

“I would watch videos of (Bryant) on YouTube,” he said. “He’s basically the reason why I love the game. He had that Mamba Mentality, baby.”

The contest began with an intriguing showdown — the Mavericks’ proficient inside scoring against the Cardinals’ strong interior defense. MLS got the ball in transition and scored some easy baskets, but Nedrose rejected some shots at the rim.

The seesaw affair continued throughout the first half. Some key offensive rebounds helped the Mavericks tie the score at 29-29 before the intermission.

In the second half, the Cardinals pounded the glass and created a plethora of second-chance opportunities.

“It wasn’t very good in the first half,” Nedrose head coach Matt Norby said of the Cardinals’ rebounding. “We really struggled to rebound the basketball, both offensively and defensively. We should dominate on the boards, and we finally did that in the second half. It was a big change.”

Lauron and sophomore guard Joseph Roberts linked up on some key defensive possessions, and the Mavericks fell just short of closing the gap.

A jubilant Cardinals bench rushed toward the floor after the game went final. The win over the sturdy Mavericks made school history, as Nedrose polished off its first-ever Region 6 Tournament victory in the final moments.

“It’s a program-builder,” Norby said. “Last year, we made regionals, which was big. Now, we’ve won in regionals.”

“They will be a tough group to replace,” MLS head coach Brian Olson said. “They bring a lot of toughness and a lot of energy as a group. We have some really skilled underclassmen, but we’ll have to replace some of that toughness and that energy that those guys bring.”

Nedrose will meet District 11 No. 1-seeded Rugby in a 6 p.m. semifinal game this evening. Back on Feb. 29, the Panthers earned an 82-48 victory over the Cardinals at the District 11 Tournament in Rugby.

“We’ll see what we can do,” Norby said. “They’re a really, really good team. We’re going to have to play perfectly. That’s why you play the game.”