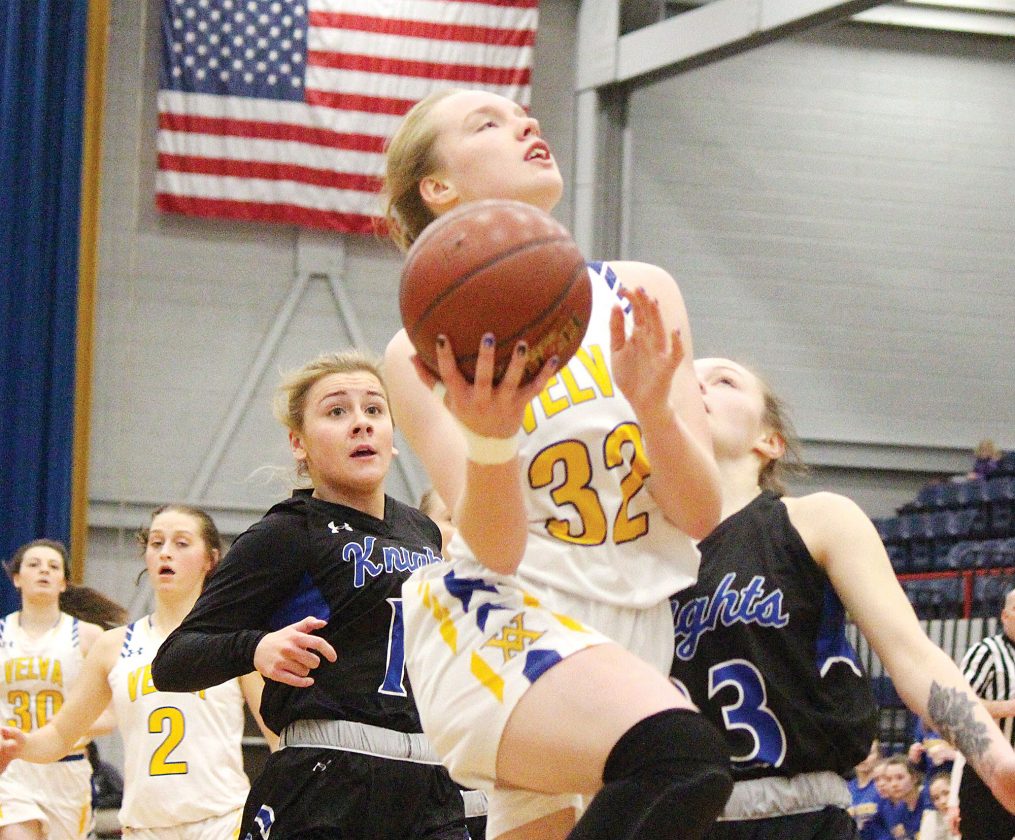 Alex Eisen/MDN Velva freshman Olivia Passa (32) attacks the basket for a layup Tuesday evening against Our Redeemer's in the Region 6 Tournament semifinals at the Minot Municipal Auditorium.

The Velva girls basketball team is going to get another crack at making a showing at the state tournament for the first time since the Aggies won the Class B state championship in 1998.

District 11 No. 1-seeded Velva (14-10) clinched its fifth straight Region 6 Tournament title game appearance with a 39-36 victory over District 12 No. 2-seeded Our Redeemer’s (16-8) Tuesday evening at the Minot Municipal Auditorium.

The postseason clash was the first meeting between the two teams this season. It didn’t disappoint.

“It was really stressful,” Velva guard Madison Effertz said. “But, I had complete faith in my team the entire time. When things got shaky, I knew the right people had the ball in their hands.” 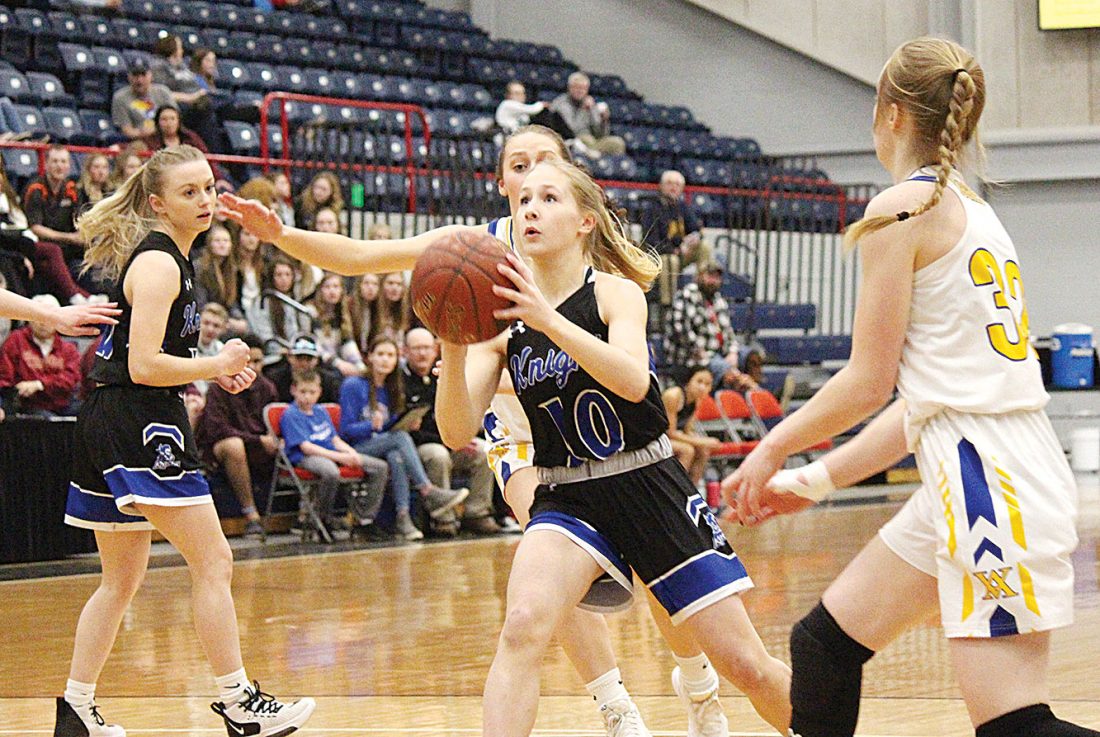 Alex Eisen/MDN Our Redeemer's eighth-grader Maya Vibeto (10) goes up for a shot Tuesday evening against Velva.

The Knights led 9-7 after the first quarter.

Velva took the lead back several times in the second frame. Effertz went to work in the paint for 12-11, then a backdoor cut by Kaitlyn Lund made it 14-12 and, lastly, a free throw made by Effertz set the score at 15-14.

But, ORCS got the ball back for a last-second inbounds play under the basket — much to the displeasure of the Aggies’ faithful who thought the Knights touched the ball. Senior guard Hailey Roberts snuck her way inside and beat the buzzer with a quick shot off the glass.

The Knights led 16-15 heading into halftime. Roberts was providing a bulk of the Knights’ scoring. She finished with a game-high 19 points.

Fellow ORCS guard Kendal Braun suffered a lower-body injury in the third quarter. In the minutes that followed with Braun off the court, the Aggies found another gear.

“It was that one stretch they went on at the end of the third quarter, when Kendal (Braun) went down,” Peterson said. “They built a seven-point lead there. If we could have held close, I think it would have been our game.”

Jadyn Sandy drilled a 3-pointer and Rylee Frantsen got to the free-throw line for a possible three-point play. Even though she missed the freebie, Velva had a 26-22 lead and the momentum going to the fourth.

“Thankful our run stretched it out a little bit and gave us a cushion,” Velva head coach Chris Braaten said. “Then, they came back and hit some shots. Basketball is a game of runs. You just got to make one more than the other team.”

Velva’s Whitney Schepp and Olivia Passa each made free throws in the final 35 seconds to try and keep the Knights at-bay.

But, it was a missed free throw that allowed ORCS to get off a desperation 3-pointer in the final seconds to try and tie the game.

Roberts took the final shot. It clanked off the backboard, wide left.

“It came down to the final possession,” Peterson said. “We had a nice shot at the end, and the player we wanted taking the shot.”

The Aggies’ offense came from all over the court. Eight different players scored with Effertz and Sandy leading the way with only 8 points apiece.

“You talk about basketball being a team sport,” Braaten said. “We can go 9-10 deep pretty easy because the girls do a nice job of getting us quality minutes. We get a feel for that every day in practice.”

Velva moves on to the Region 6 Tournament championship game to face familiar District 11 foe Rugby. Tipoff on Thursday at 7:30 p.m. in Minot.

The Aggies upset the Panthers to win the District 11 Tournament this season. But, Rugby has upended the Aggies the last two years in the Region 6 Tournament title game to reach state.

Velva has come up short in the last four regional title games with Rugby ending its season three of those times.

“We have been here before, and I love every moment of it,” Effertz said about returning to the regional title game. “This is a whole new team, so I know some girls haven’t been there. But, they are just as excited as I am.” 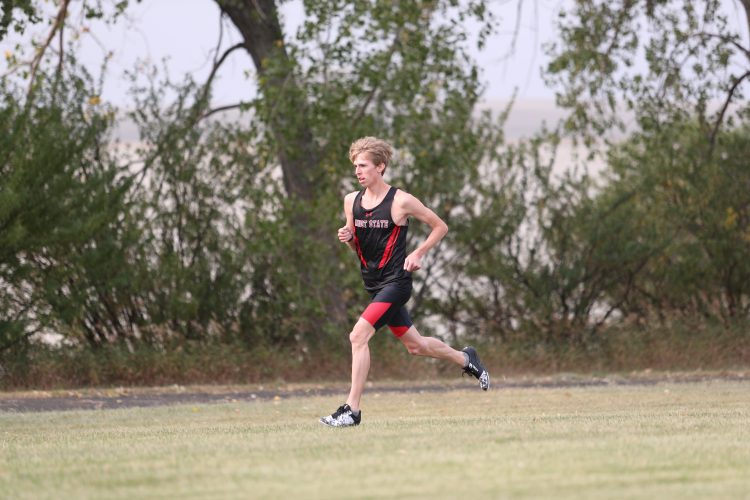