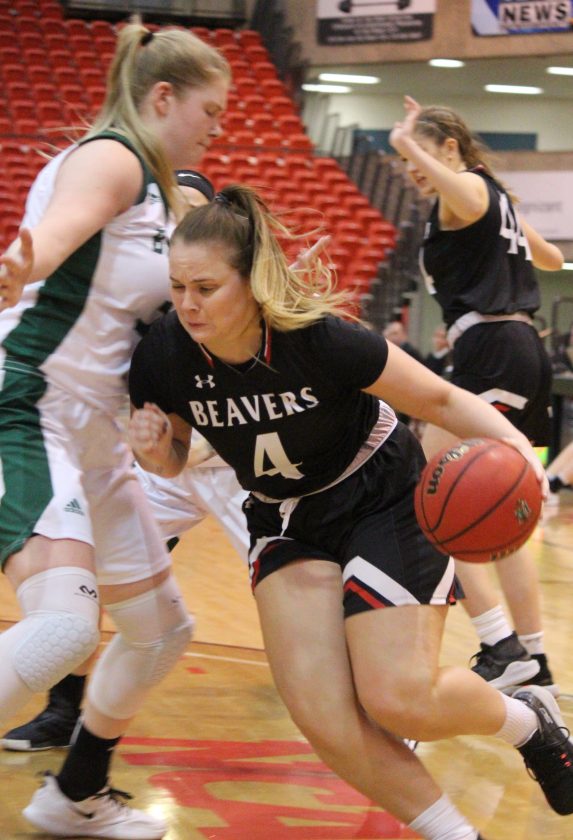 Along with the traditional pre-game acknowledgments for senior night, the Minot State women’s basketball team went a step further and played the Australian national anthem for senior Mariah Payne.

All the fanfare inspired a strong start, but it didn’t last.

“It was one of those nights where absolutely nothing went right,” MSU head coach Mark Graupe said. “What do you do? Like I told them afterward, you just move on from this. We have been playing too well lately to let one game mess everything up.”

Both teams entered the contest with identical records and tied for sixth place in the NSIC North standings. Bemidji State (8-16, 5-15 NSIC) bumped Minot State (7-17, 4-16 NSIC) down to seventh with two games left in the regular season.

“Now to get our goal (of the No. 6 seed), we have to split next weekend,” Graupe said. “Both Bemidji and Crookston have really tough games. They have to play the top two teams in Duluth and St. Cloud. So, if we can somehow split, we might still get our goal of sixth place.”

MSU couldn’t have scripted a better start on Saturday with seven straight points coming from three different scorers. Bemidji State also picked up three quick fouls in a little over a minute into the contest.

Minot State’s early success, however, wore off in a flash.

Bemidji State took control by feeding Rachel Heittola, who was a force in the paint. She racked up a team-high 15 points.

“Their posts had their way against us,” Graupe said. “They are the most physical posts we will face all year. They got too deep on us, close to the rim. It’s hard to help because then it’s so far to run back out to a shooter. That hurt us.”

Fouls started to pile up rapidly, with both teams shooting nine free throws in the first quarter.

“We started off so well,” Graupe said. “Then, it just snowballed.”

Bemidji State used a 15-1 run to build up a 28-16 lead in the early stages of the second quarter.

A 3-pointer made by Claire Wolhowe had MSU down 20 points going into halftime, 47-27.

Bemidji State shot 7-for-12 behind the arc in the first half, while MSU failed to connect from deep (0-for-5).

The outside shooting woes weren’t MSU’s only concern. All three of Minot State’s inside post players — Strand, Haley Hildenbrand and Anna Counts — had three fouls at the break.

Twenty-two total fouls were called in the first half, with 12 going against MSU.

MSU scored the first six points of the third quarter but were still looking up at a 20-point deficit at the end of the quarter, 61-41.

Payne made her only 3-pointer in the fourth quarter. MSU only shot 2-for-10 from behind the arc.

“We haven’t shot the three all year,” Graupe said. “We aren’t a three-point shooting team.”

Payne finished with a team-high 20 points on 9-for-19 shooting in her final game inside the MSU Dome.

“Before the game, I thought I was OK,” Payne said about the realization that she was playing her final game in Minot. “But, then you realize, after five years that this is my last time playing here. So, it would have been nice to get a win. But, we are just going to focus on next week. We still got three more games. Our season isn’t over.”

Joining Payne in double figures was Bethany Theodore with 13 points.

Despite the foul trouble early on, nobody finished with more than three fouls for Minot State.

Bemidji State did most of its damage from deep, shooting 15-for-25 on 3-pointers. They also went 14-for-15 at the free-throw line.

“I thought we would come out with a lot of hunger and with more fire for the last home game of the year,” Graupe said. “It seemed so uninspired, and that was probably the most disappointing thing.”