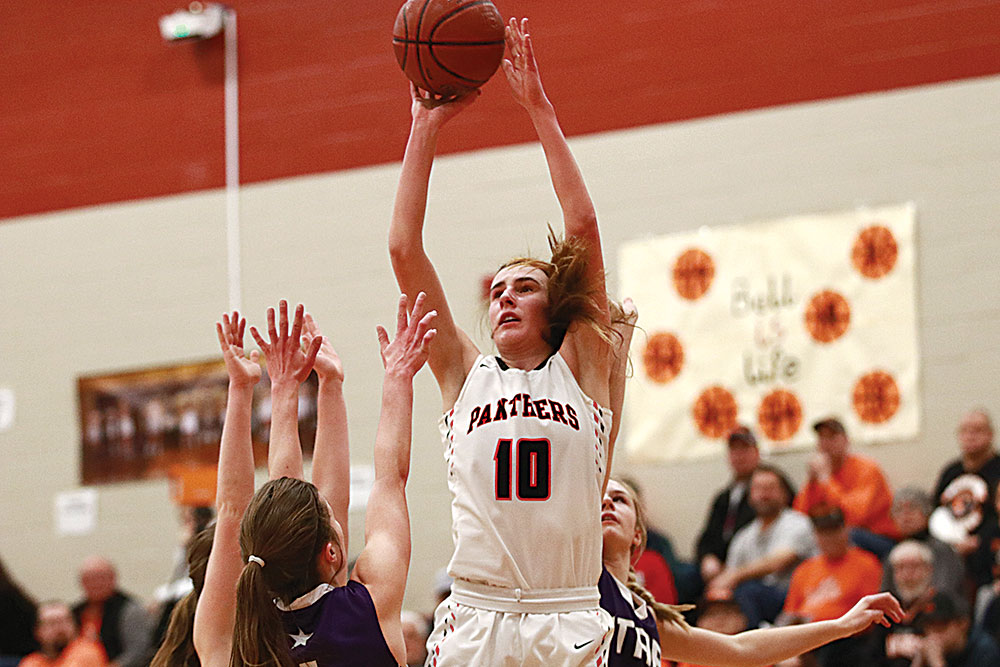 Jimmy Lafakis/MDN Rugby junior Brooke Blessum goes up for a shot in the first quarter of Friday’s District 11 Tournament semifinal against Bottineau at Nedrose. Blessum finished with 8 points in the Panthers’ 49-20 win over the Stars.

When the Rugby girls basketball team finds itself in a tight spot, Rugby head coach Jen Brossart trusts her past experiences.

In the second half of Friday’s first District 11 Tournament semifinal, Brossart pounded the hardwood and encouraged her team to play defense. The No. 1-seeded Panthers (18-2) responded in kind and earned a 49-20 win over No. 5-seeded Bottineau (8-13) at Nedrose.

After Rugby enjoyed a first-round bye, those passionate floor slaps served as the Panthers’ wake-up calls.

“I had an assistant coach at the University of Mary, and that’s how she got us girls pumped up,” Brossart said. “It’s just instinct for me. You coach how you were coached, and I was coached in college like that. It just seems to resonate down to the girls. That’s how we roll, I guess.”

Rugby scored 11 unanswered points and eventually led 13-2 at the end of the first quarter. In the second frame, the Stars’ defense limited the Panthers to just five points.

After taking control in the contest’s beginning stages, the Panthers held a slim 18-11 lead at the break.

“We got into some foul trouble there in the first quarter,” Brossart said. “That kind of took us out of sync. Also, we had some rust from not having played since a week ago. No excuses. We didn’t play that great in the second quarter.”

With Brossart providing support from the sidelines, Rugby junior Riley Grove supplied the spark on the floor. Playing in her first game since sustaining a concussion last month, Grove provided key contributions in multiple facets.

“We really needed to work on our defense in the first half,” said Grove, who finished with 5 points. “That second quarter was kind of rough for us, but I think we really kicked it back into gear in the third quarter.”

Rugby gradually expanded its lead and locked down on defense. After the game, Brossart was effusive in her praise of Grove.

“This team has stuck together,” Bottineau head coach Michael Vandal said. “We haven’t won as many games as we would have liked to in the regular season, but this team leaves it all out on the floor. There’s never an effort issue with this team. They never give up.”

Bottineau will play No. 6-seeded Drake/Anamoose at 4 p.m. this afternoon in a regional qualifier. Rugby will face No. 2-seeded Velva at 7 p.m. in the District 11 championship game.

“I’m really proud of our team and how far we have come,” Grove said.