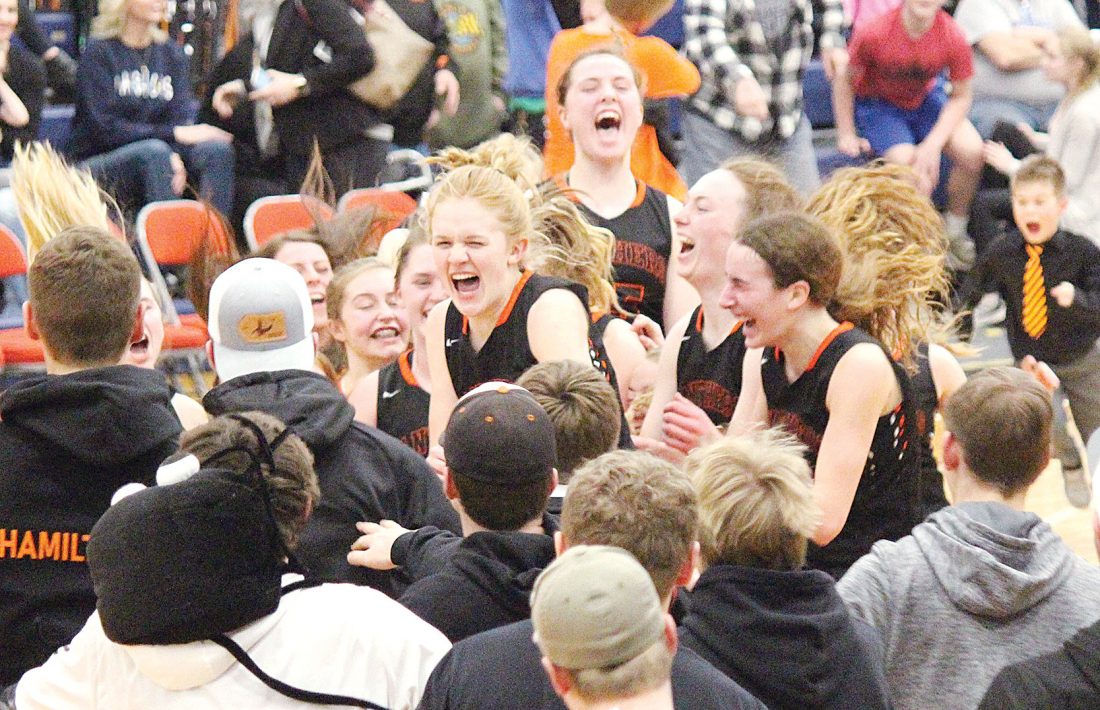 Alex Eisen/MDN The Rugby girls basketball team celebrates with the student section rushing the floor Thursday evening after winning the Region 6 championship game against Velva at the Minot Municipal Auditorium.

The Rugby High School girls basketball team is heading back to the state tournament for the fourth time in the last five seasons.

“I remember way back in June when we did our first team camps,” Rugby head coach Jen Brossart said. “We went 2-10. I just said you got to believe. We had a lot of things to iron out and a new rotation to figure out. Week by week, they got better over the summer. They had a great volleyball season, and they feed off of that. We took our scrapes at the beginning of the season. But we knew what we had. We just had to find it.” 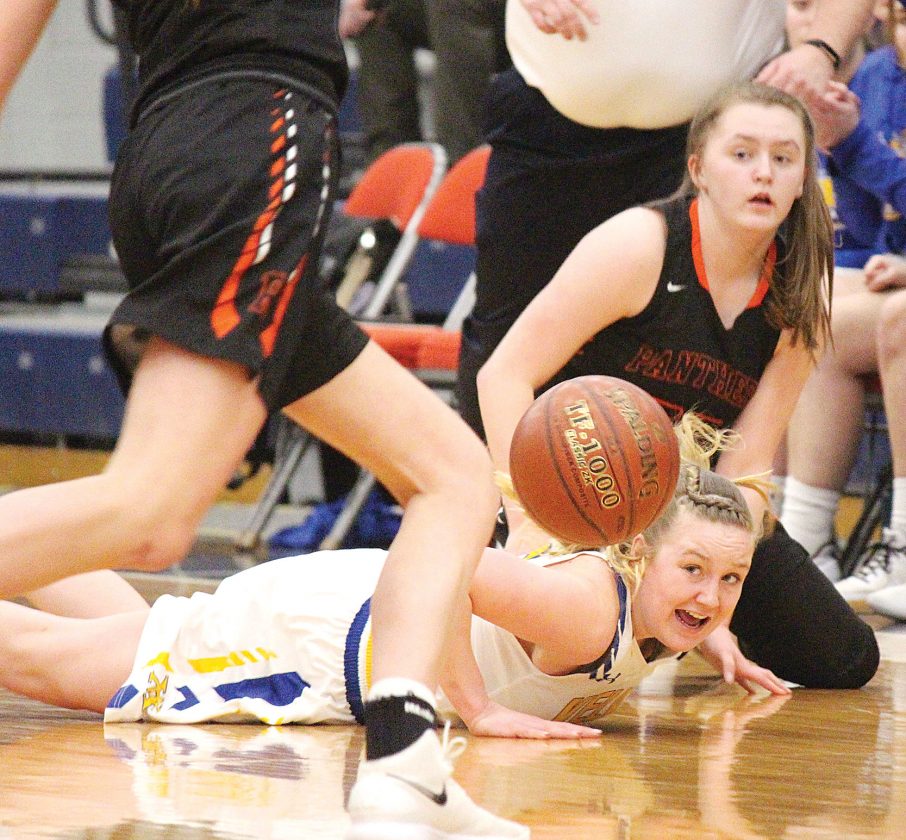 “This feels unbelievable,” Rugby freshman forward Mykell Heidlebaugh said. “I love how we can persevere and get through anything. I just feel amazing right now.”

Velva scored the opening points on a 3-pointer made by freshman Olivia Passa. But, Rugby settled in and took control soon after.

After making five 3-pointers in the regional semifinals, Rugby junior Tesha Sobolik showed off her range to close out the first quarter. That gave the Panthers a nine-point lead, 17-8, after the first eight minutes.

Sobolik made three 3-pointers for her 9 points.

“(Sobolik) continued where she left off,” Velva head coach Chris Braaten said. “We knew it. But, she just kept slipping away on us.”

Bodies were flying all over the court after loose balls. The intensity was unmatched.

“Our girls play sticky defense,” Brossart said. “We have preached defense for 10 years. They ride off that. As long as we can feed off that, our offense follows.”

“The game is a lot easier when some shots fall,” Braaten said. “We didn’t have a lot of wide-open opportunities. Then, when we had an opportunity, it didn’t fall.”

A layup by Gabi Sullivan pushed Rugby’s lead to 38-25 after three quarters.

After the Panthers outscored the Aggies 6-5 in the first four minutes of the fourth quarter, everyone’s attention was on the clock.

It was only a matter of time.

The final buzzer sounded with Rugby up 46-32.

The Panthers who were celebrating on the court were sandwiched between the student section rushing the floor from one side and Rugby’s bench joining the party on the other side.

“It doesn’t get any easier,” Braaten said. “To watch them put all that work in and come up short again is tough on the old ticker. They become a part of your family. You celebrate with them, and you hurt when they hurt.”

Seeding for the state tournament has yet to be decided. But, that will be the least of Rugby’s worries. The Panthers went into last year’s state tournament unranked and nearly won the program’s first state title.

“Never give up,” Heidlebaugh said. “Last year, we were unranked and beat the No. 1 seed. So, never give up and keep pushing through hard times.”

Brossart added: “Anything can happen at the B. We are proof of that.”

Roberts ended with a game-high 30 points. Nonetheless, the Region 6 Senior Athlete of the Year was given to MLS guard Leah Feland.

Alex Eisen/MDN The Rugby girls basketball team celebrates with the student section rushing the floor Thursday evening after winning the Region 6 championship game against Velva at the Minot Municipal Auditorium.