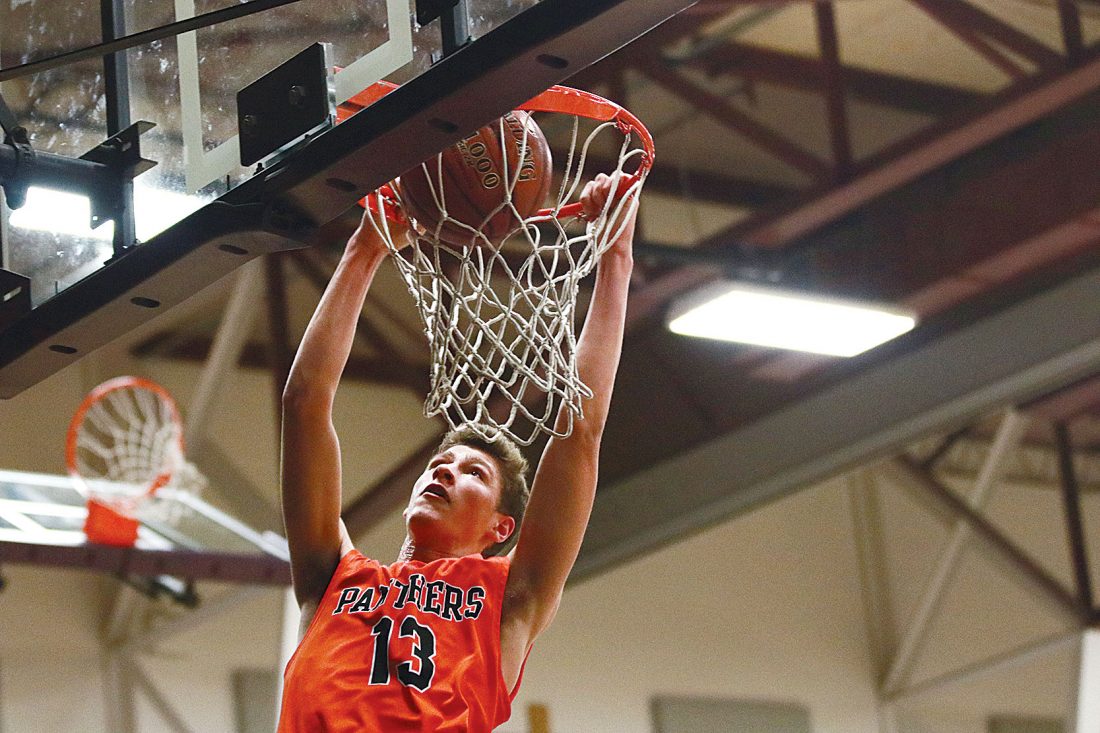 Jimmy Lafakis/MDN Rugby senior forward Jaden Hamilton dunks the ball during the second quarter of Tuesday's Class B boys basketball game against Bishop Ryan in Minot. The Panthers earned a 64-34 victory over the Lions.

Although the Rugby boys basketball team is ranked No. 4 in the state, Panthers senior guard Trace Goven sees some room for improvement.

After leading 14-8 at the end of the first quarter, Rugby increased its lead to 28-15 before the intermission. Because the Panthers held a towering height advantage over the Lions, Ryan countered with a zone defense.

That zone caused some early problems for Rugby. The Panthers seized some transition opportunities, but Ryan showed grit on the glass.

“For about the first quarter and a half, they outworked us,” Goven said of the Lions. “Then, we got down on ourselves and didn’t play up to our potential.”

In the second half, the Panthers found their groove. Their superior athleticism and newfound confidence paved the way to a wider gap.

After converting several outside chances, Rugby held an insurmountable lead. Some shots didn’t fall for the Lions, and the Panthers secured the 64-34 win.

“Sometimes, our effort is led by how well our offense is running,” Rugby head coach Mike Santjer said. “We need to fix that getting into tournament time. On the flip side, when our offense is clicking, we’re pretty hard to stop. It leads to easy baskets in transition. We’ve got a ways to go defensively. Offensively, I think we’re getting close.”

Freshman forward Brady Feller paced the Lions with 11 points in their regular-season finale. Feller was the only Ryan player to reach double figures.

“There’s a lot of positives we can take from this,” Ryan head coach Jeremy Feller said. “They’re a good basketball team. They have the complete package. They’re physical, they’re strong, they can shoot it, and they’re tall. We knew the cards were stacked against us, but we were happy with the way we played.”

“Ryan did a great job tonight on their dribble drive and getting into the paint,” he said. “They were causing us to shift our defense and were able to kick out to guys. We’ve just got to have a little better individual defense where we keep guys out of the middle.”

Rugby will travel to Dunseith for a 7 p.m. tipoff on Friday. Ryan will participate in the District 12 Tournament next Friday at the Minot Municipal Auditorium.

“Hopefully, we can finish the season strong and continue that into the tournament,” Santjer said.