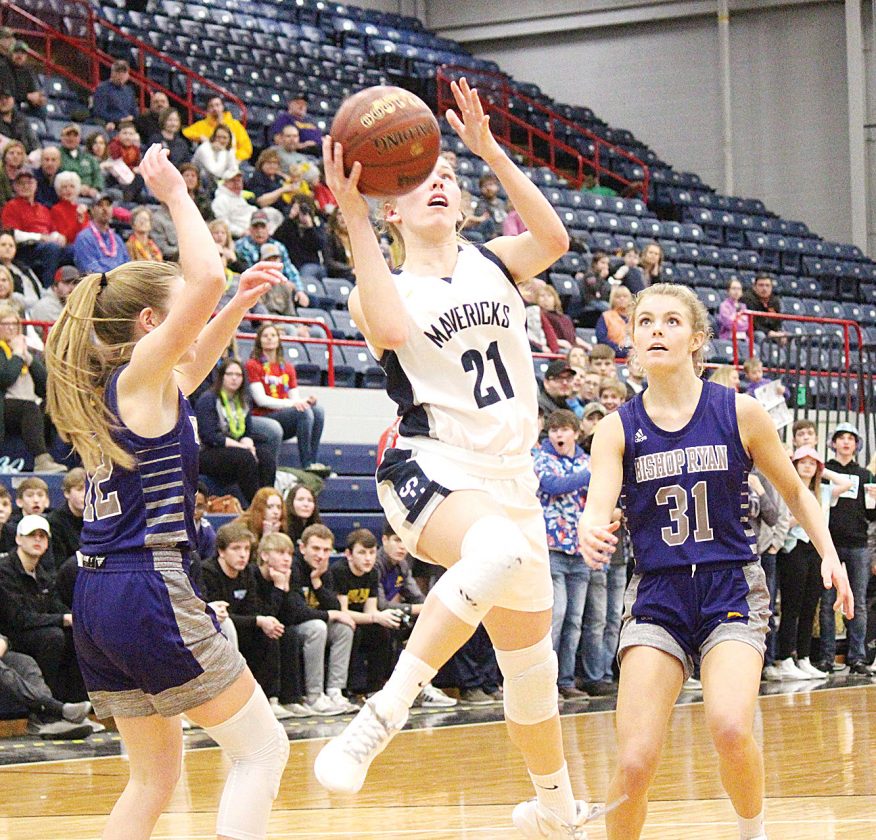 Aggressive and physical, the No. 1-seeded Mohall-Lansford-Sherwood Mavericks fended off No. 5 Bishop Ryan in an absolute bruiser to reach the District 12 Tournament championship match.

“We aren’t the most physical team in America, but I’m happy when we do get physical,” MLS head coach Wayne Brackenbury said. “We need to get physical.”

Scraping for loose balls set the tone from the get-go. Nothing was going to be given away. Everything had to be earned.

MLS eventually broke free and opened up a double-digit cushion in the second quarter.

A 3-pointer by sophomore Sydney Upton appeared to have the Lions only down 10 points at halftime.

But, Mavericks sophomore guard Madison Moberg drained a wide-open jumper on the baseline to beat the first-half buzzer.

MLS led 33-21 at the break. The Mavericks doubled up the Lions 16-8 in the second quarter.

Upton went off for a game-high 28 points.

“I liked our lead at halftime, but we let them back in with the three-ball,” Brackenbury said. “We knew the key to our success was slowing down their threes. We gave them a lot of good looks. I mean, Upton, she shot the lights out.”

Senior guard Maya Wald hit a corner 3-pointer to knot the score at 37-37.

Leah Feland, the Mavericks’ experienced senior guard, converted a three-point play to give MLS a 43-40 lead going into the fourth quarter.

“Feland needs to attack more,” Brackenbury said. “I felt like she didn’t attack the elbow enough. She pulled up and that gave long passes to our wings. (Ryan) picked a couple of those (passes) off.”

Three made field goals by sophomore Kylie Abernathey opened a slight cushion, 52-42, for the Mavericks.

“That felt pretty good,” Abernathey said. “It feels good when you start getting on a roll and start hitting them. It’s nice. You never know when that is going to come. It just does.”

MLS rode its defense to the finish line, as Ryan ran out of steam.

“We got back into some bad habits,” Ryan head coach Roger Coleman said. “We know what they want to do offensively. We just had moments early and moments late where I felt like we made it too easy for them on offense.”

“Tomorrow we have to come out with fire in every single quarter,” Abernathey said. “Do what we did (on Thursday), when we played really well. Today, we played well most of the game. But, that third quarter was a little rough.”

MLS advances to the District 12 Tournament championship game against No. 2-seeded Our Redeemer’s at 7 p.m. this evening.

Ryan drops into a regional qualifier match at 5:30 p.m. this evening against No. 6-seeded Surrey.

“This game doesn’t matter anymore,” Coleman said about the loss to MLS. “We have to fight to survive, and win one more week of basketball.”