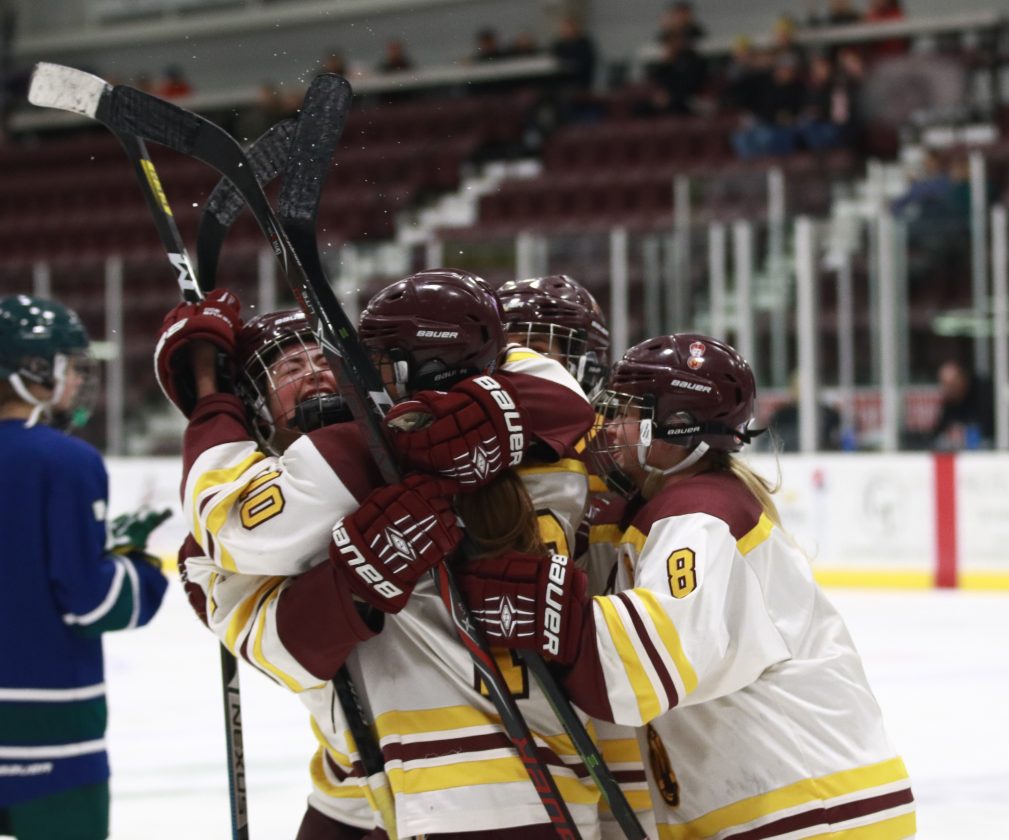 Jimmy Lafakis/MDN Minot High players celebrate after a goal in the first period of Saturday's game against West Fargo in Minot. The Majettes earned a 2-1 overtime victory.

Emily Thiele kept her composure in the final seconds. When an opportunity knocked, Thiele cashed in on her chance.

“When I got the puck, the first thought was ‘We need to win,'” said Thiele, a sophomore defender. “‘We have to get going. We have to score.’ When it went in, my blood just rushed through my body. It just felt surreal.”

Thiele made her move down the left side of the ice, took a shot and then tapped in her own rebound. After the unassisted goal found the back of the net, the Majettes rushed to celebrate with her.

Although Thiele’s teammates expressed their enthusiasm, the golden goal didn’t sink in with her right away.

“I had no idea it went in at first,” Thiele said. “Then, they came in running. I was like, ‘Oh, my God. That happened.’ And then it just felt really good.”

Minot gained a first-period advantage, but West Fargo tested the Majettes’ defense throughout the contest. Minot senior forward Brenna Abrahamson weaved her way in for a goal just over nine minutes into the first period.

Then, the game reached a stalemate. After Minot senior forward Kaya Shaw and freshman defender Kinsey Fjeld assisted on Abrahamson’s goal, neither team scored in the second frame.

“We never give up,” Minot co-head coach Christopher Stokke said. “We always keep working and keep our feet moving. We’ve had our ups and downs, but I like the way we’re trending right now.”

West Fargo freshman defender Erin Nowacki found the back of the net in the third period. The Majettes earned some solid looks at the goal, but the contest eventually progressed into overtime.

Thiele worked her magic just 1:56 into the extra period.

“All game, I was saying that it was going to be the second (shot),” Minot co-head coach MaKayla Sandvold said. “You just have to anticipate it. It’s a good goalie, she’s going to make the first save. It’s the rebound, and that’s what Thiele did.”

Added Stokke: “She was aggressive with the puck. She took matters into her own hands. She got a good shot off and she followed it up with the rebound. It kind of trickled in there. Sometimes, that’s what you need to win.”

The Majettes are approaching tournament time. When the regular season concludes, Minot can use Saturday’s victory as a learning experience.

“Throughout the year, we’ve seen gradual improvement from everyone,” Minot assistant coach Taryn Love said. “Just to see it all finally coming together, especially at this point in the season, is really exciting going into the last two weeks.”

After closing out their home schedule with a win, the Majettes will travel to Mandan for a 7 p.m. puck drop on Tuesday.

“We needed that win,” Thiele said. “We needed to get our energy back up and get our heads back in the game.”