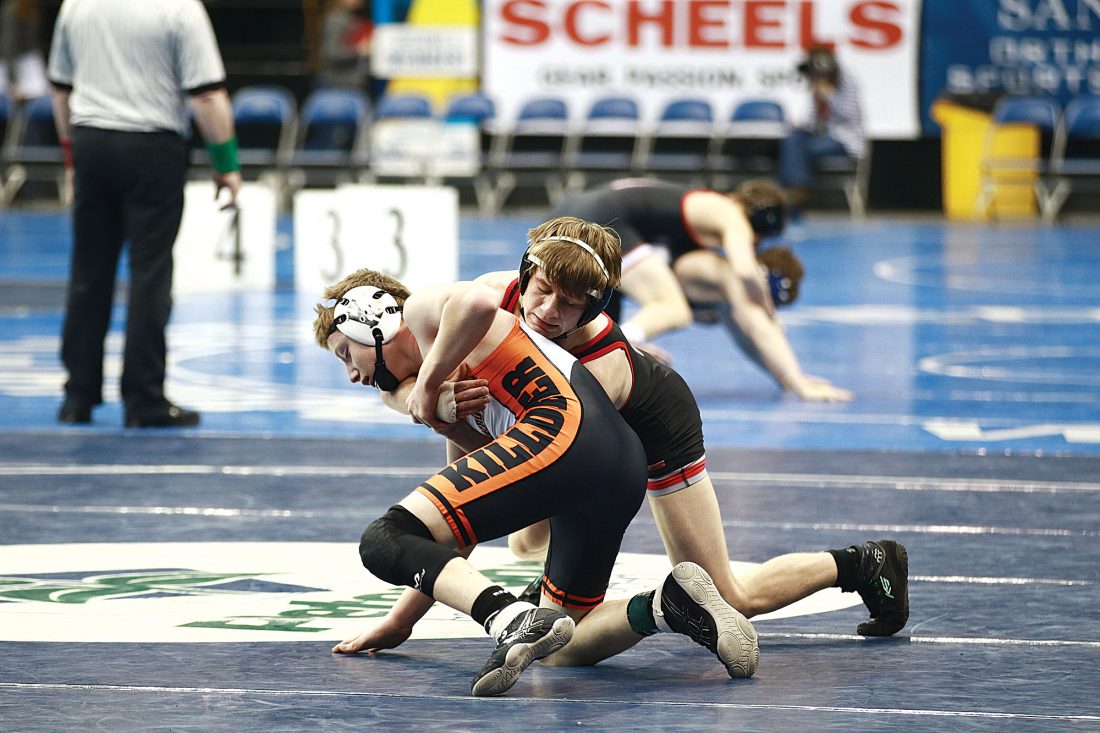 FARGO — In the midst of Thursday’s action, local wrestlers answered the bell.

Each of the Class B Individual Tournament’s 14 weight classes decided its four semi-finalists. Here’s a glance at the wide variety of local talent that made the cut and reached the semifinals:

No. 2 Dean made quick work of his first two opponents in the individual round. Velva’s sterling sophomore earned a 1:16 fall victory over Carrington’s Trace Hoggarth and pinned No. 7 Tristan Lepp of South Border in 1:19.

Dean will meet Lisbon’s No. 3 Carter Wallner in today’s semifinals.

As the No. 5 seed, Mogen is on the hunt for revenge. He placed second last year as a sophomore at 113, falling to Lisbon’s Caleb Nielsen in the championship.

On Thursday, Mogen pinned Hettinger-Scranton’s Miles Weichmann in 5:20 before earning an 8-0 major decision victory over No. 4 Nielsen in his second match.

“Everything was kind of working for me today,” Mogen said. “I felt really good. I’m looking to get back to the championship and finish the job this time.”

No. 7 Odden is one of two Panthers in the individual semifinals. The sophomore pinned Beulah/Hazen’s Colson Sago in 1:32 and earned an upset victory later in the day.

After pinning No. 2 Brecken Lura of Carrington in 3:34, Odden earned a meeting with No. 3 Grant Schneider of South Border.

No. 5 Volk is the other Panther who earned a semifinal berth. Volk seized a 16-1 technical fall victory over Beulah/Hazen’s Trevin Sago in the first round and captured a 9-5 decision victory over No. 4 Carsen Mertz of Harvey/Wells County in the second round.

The Rugby senior will compete against No. 1 Jordan Sours of Lisbon.

No. 1 Okeson oozes with confidence on and off the mat. The Ryan senior earned two more wins on Thursday and kept his momentum going.

Both of his wins were decisive. Okeson pinned Bowman County’s Mace Stuber in just 32 seconds and earned another pin over Napoleon/Gackle/Streeter’s Noah Becker in 3:32.

Okeson will face a tough test in No. 4 Gavin Wright of Hillsboro/Central Valley.

“I don’t have another chance after this,” Okeson said. “I’ve got to go out there and give it my all.”

After winning his first state championship last season with an unblemished record, No. 1 Spooner has stayed perfect again so far this year. DLB’s standout senior improved to 42-0 after two dominating wins on Thursday.

Spooner pinned New Salem/Almont’s Isaac Wolff in 2:49 and also pinned No. 8 Rylan Sago of Beulah/Hazen in 1:46.

Another seeded opponent, No. 5 Mitch Stuber of Bowman County, will meet Spooner in today’s action.

Like Okeson, Henjum lived up to his billing as a No. 1 seed on Thursday. The senior pinned Harvey/Wells County’s Jaden Vlaminck in 35 seconds in his initial round.

After sending Vlaminck to the consolation bracket, Henjum pinned No. 8 Zane Miller of Kenmare/Bowbells/Burke Central in 3:15. In an intriguing twist, No. 4 Ethan Lyons of Lisbon will meet Henjum in the semifinals.

“It’s very special to be a Lion,” Henjum said. “It’s great to compete. I’m super-excited to hopefully compete for a state title these next couple of days. The emotions are hitting me now.”

No. 3 Hodges will wrestle on the other side of the 285-pound bracket. The junior has enjoyed a successful season and kept riding that wave on Thursday.

Hodges pinned Killdeer’s Ben Roundy in just 1:08 to open the action. After that, the Aggie earned a 15-6 major decision victory over No. 6 AJ Heins of New Salem/Almont in the second round.

The top four seeds in the 285-pound weight class will square off against one another. No. 2 Nate Boehm of Bowman County will challenge Hodges in today’s match.