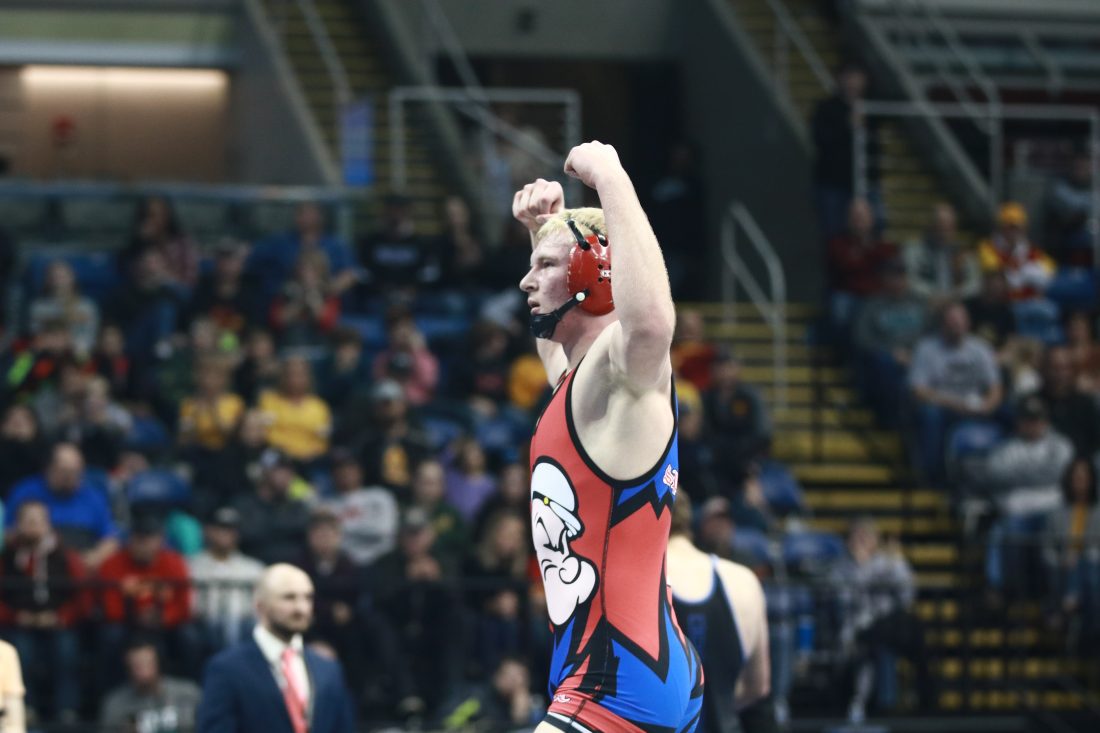 FARGO — When hiring managers conduct interviews with potential job applicants, a particular question will come in the form of a curveball. It is meant to throw the interviewee off balance — an inquiry out of the norm.

“If you were an animal, which one would you be?”

If Coy Spooner needed to select an animal to personify his wrestling technique, a python would fit the Des Lacs-Burlington senior’s style. Spooner slithered his way to his second straight state championship on Saturday, defeating No. 2 seed Nathan Schauer of South Border in the process.

Spooner’s 8-0 decision victory in the 195-pound bout cemented the senior’s status as one of Class B wrestling’s kings. After polishing off his 44-0 campaign, he became the only Laker to ever repeat as a back-to-back state champion.

“One thing that I knew would make me successful is just being consistent,” Spooner said. “Staying in good position. I spend a lot of time working on the little things in practice. Moving my feet, creating angles, staying in position. Those little things make big things happen on the mat. That’s what makes the takedowns possible, the turns on top possible and the escapes on bottom possible.”

“My style is just to chip away, chip away, keep on (opponents),” he said. “I eventually suffocate them out of the match because I keep constant pressure on them. That’s just something that I have developed over the years. It’s made me a dominant wrestler.”

The No. 1 seed recorded just one first-period takedown, but those two points proved to be more than enough. Spooner recorded another takedown in the second period and pounced on top of Schauer.

An early escape, a point from a stalling penalty and a final takedown finished the job. After finishing 40-0 last season, Spooner squeezed every morsel of dominance from his final high school match.

Spooner honed his craft with a man who solidified himself as more than an assistant coach. His father, Nolan, enjoyed a front-row seat to Coy’s progression throughout the years.

“He will take what the opponent gives him,” Nolan said. “He does the little things that make a big difference in a match. He is playing chess when most wrestlers are playing checkers.”

This fall, Coy will continue his wrestling career at the United States Coast Guard Academy in New London, Connecticut. After the convincing victory, DLB head coach Kellan Zietz reflected upon Coy’s last hurrah as a Laker.

“Coy wrestled his last match with the control and positioning that defines him as a wrestler and person,” Zietz said. “He works his tail off on and off the mat.”

Soon, the Lakers must look to the future. But after Coy’s win, reminiscing is appropriate.

“When I think of Coy, I think of excellence,” Zietz said. “He takes pride in doing his best and putting the necessary time in to achieve his goals. It’s bittersweet for me. It will be hard to lose Coy’s leadership in the room, but he deserves every second of the enjoyment from finishing out his career this way.”

Undoubtedly, Coy etched his name into the history books on Saturday. After becoming the program’s first two-timer, the senior ascended into rarefied air.

“If I wanted to do something that’s never been done before, I would have had to do things that nobody has ever done,” Coy said. “That’s been my mindset this entire year. It paid off for me.”