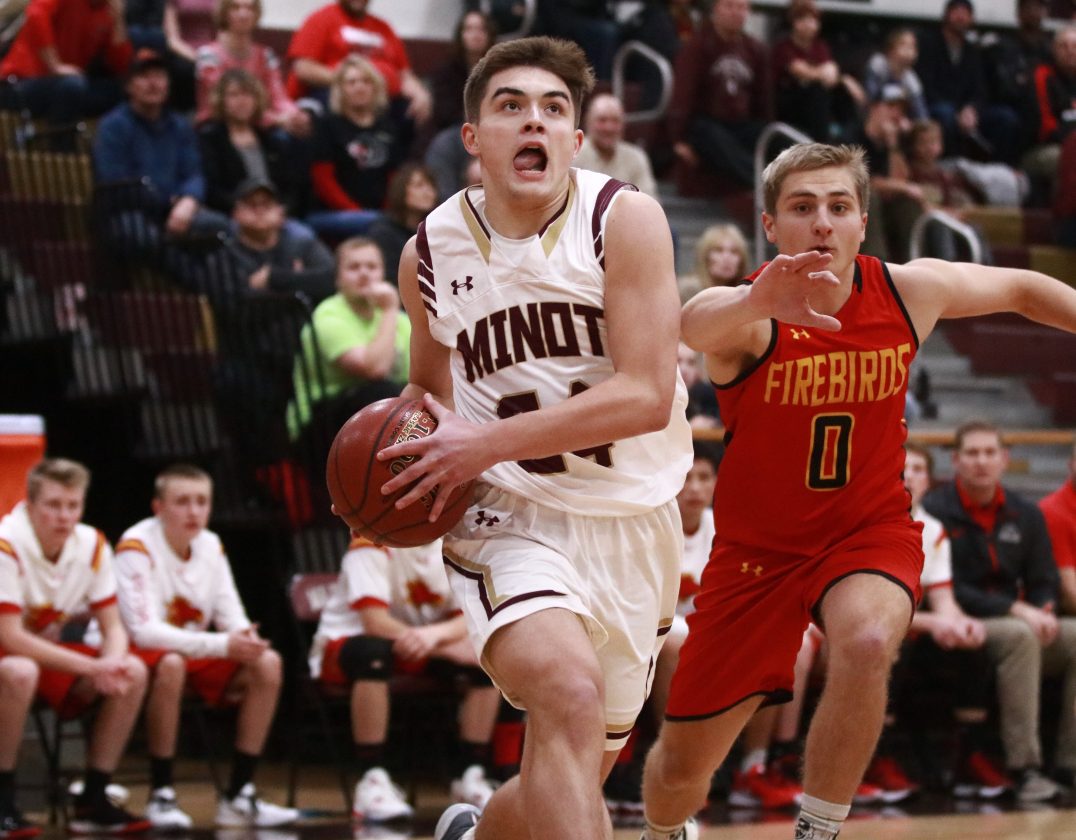 Jimmy Lafakis/MDN Minot senior guard Jaxon Gunville (24) evades Devils Lake senior guard Braden Fee (0) in the first half of the Magicians' 101-62 win over the Firebirds at Magic City Campus on Saturday night. Gunville scored a game-high 31 points in the victory.

Gunville’s 31-point performance in Minot’s (1-0) 101-62 victory over Devils Lake (0-1) hearkened back memories of former Detroit Pistons guard Vinnie Johnson. During the “Bad Boys Pistons” era, Johnson earned the nickname “The Microwave” for his ability to score rapidly in a short period of time.

The senior guard finished 11-for-14 from the field (5-6 3PT) and dished out five assists in the win. Although Gunville caught fire in the first half, the Firebirds hung around.

“I got going a little bit early,” Gunville said. “My teammates did a good job of getting me the ball early and often. I started hitting shots, and then they started face guarding me a little bit. I started to get my teammates involved a little bit more. I knew that they were going to focus their attention on me.”

The Magi led 47-31 at halftime. In the second half, a surplus of Minot players contributed.

After Gunville’s sterling season opener, the senior gave a laundry list of praise to his teammates.

“(Martinez) got going a little bit,” Gunville said. “Tucker (Olson) did great this game. He made a lot of big shots. Derry (Lentz) had a big game defensively. Defensively, the things he does for us really go unnoticed. (Larson) had a tough first half with the two fouls, but he came back and showed us why we think he’s one of the best — if not the best — big guys in the state.”

“Caden (Johnson) had a huge game,” he said. “The way he just impacts the game inside, boxes out and forces contested, tough shots and rebounds, that’s tough. Johnny (Butz) had a couple of big shots and he played great defensively. Darik Dissette, coming in a freshman, we all try to take him under our wing. Just to get him up to speed. He’s very talented, and he’s got a really bright future here at Minot High. Cole Broen, the things that he did off the bench that go unnoticed. The offensive rebounds and the hustle stats that he gets, everything that he does really goes unnoticed.”

The Magi ratcheted up their intensity throughout the entire contest. Minot held a 31-20 rebounding advantage over Devils Lake.

In the midst of the commotion, MHS head coach Dean Winczewski kept his 20-year tradition going by donning his signature towel. Winczewski watched his team share the ball to the tune of 25 assists.

“I loved how we were a team tonight,” he said. “I thought it was phenomenal how our kids played together. First half, they recognized that (Gunville) got going. They ran some sets to get him opportunities. As the half wore on, when we made a run to get back ahead, they got Tucker (Olson) open shots by getting him screens and getting him kickouts.”

Olson proved to be another key contributor for the Magi. He connected on 4-of-5 threes en route to 12 points in his first career start.

“I got really nervous right away,” he said. “But I was ready. I just knew (Gunville) was getting hot. I just thought, “If he’s on it, then maybe I can be, too.'”

After Winczewski told Olson he would start during Friday’s practice, Olson answered the bell.

The Magi will undergo a quick turnaround and will play a 7:30 p.m. game against Williston (1-0) on Tuesday.

FARGO — After the Minot High School boys wrestling team matched up against some unfamiliar opponents over the ...