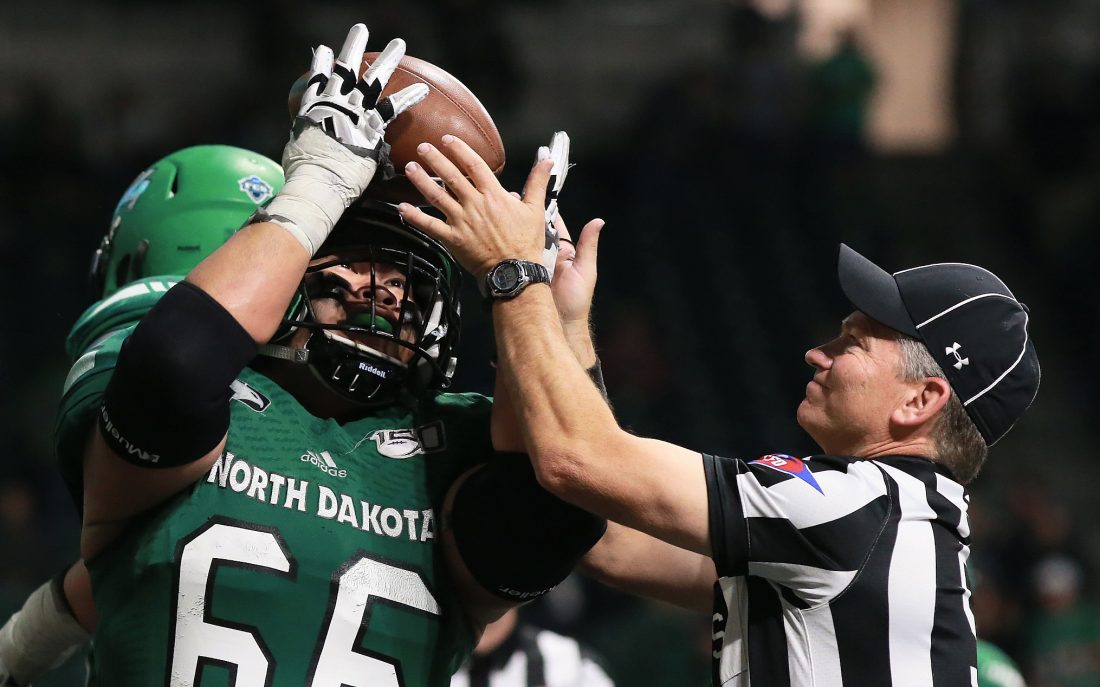 FNS Photo A referee reaches for the ball from UND's Nathan Nguon after a Fighting Hawks touchdown in the second half against Southern Utah University Saturday at the Alerus Center in Grand Forks.

GRAND FORKS — As University of North Dakota quarterback Nate Ketteringham took a knee to tick off the final seconds, Fighting Hawks offensive coordinator Danny Freund leaned out over the coaches’ box and pumped his fist.

That’s not a guarantee yet, but UND took care of its end of the playoff scenarios Saturday at the Alerus Center.

With a dominant second half, UND sealed a convincing 36-18 victory over Southern Utah in the regular-season finale.

The Hawks end the regular season 7-4 and a perfect 6-0 at home. UND has finished a regular season unbeaten at home for the fifth time since moving into the Alerus in 2001.

“I think we built a good resume,” UND coach Bubba Schweigert said. “I feel like we have a good resume, and we’re just hopeful that we get in.”

“Like we told our guys, we have to treat it like we’re in,” Schweigert said. “I’m going to go in and watch the game like I normally do Sunday morning. Then you’ve got to go to church because you want the committee to rule in your favor, right? If you’re doing that on Sunday, you should do that again and again.”

UND has made the FCS playoffs once in the Division I era, losing to Richmond in a second-round game in 2016 at the Alerus Center.

“I think we all have a pretty positive mindset,” UND senior wide receiver Travis Toivonen said. “We think we should be in. I think we’ve played well enough to get in, so you hope for that and hope the committee respects us.”

“For all of us seniors, we don’t want to be done playing football together,” Toivonen said.

But UND was able to gain some momentum by halftime. After falling behind 15-7, UND answered with a Nate Ketteringham 30-yard touchdown pass to Toivonen to make it 15-14 with 7:01 left in the second quarter.

UND kicker Brady Leach, who hit three field goals, made a 43-yard attempt with five seconds left in the first half to give UND a 17-15 lead at halftime.

The Hawks’ run game took hold in the second half to build separation. True freshman running back Luke Skokna scored two rushing touchdowns and finished with 11 carries for 114 yards.

On Skokna’s second touchdown, he spun at the line of scrimmage and raced around the outside for a 34-yard score to put the game at a comfortable distance (36-18 with 3:08 left in the fourth quarter).

UND senior wide receiver Noah Wanzek, who registered his third consecutive 100-yard game (six catches, 100 yards), was injured early in the third quarter and returned to the sideline with his right arm in a sling for the remainder of the game.

Southern Utah was led by quarterback Chris Helbig, who threw for 258 yards.