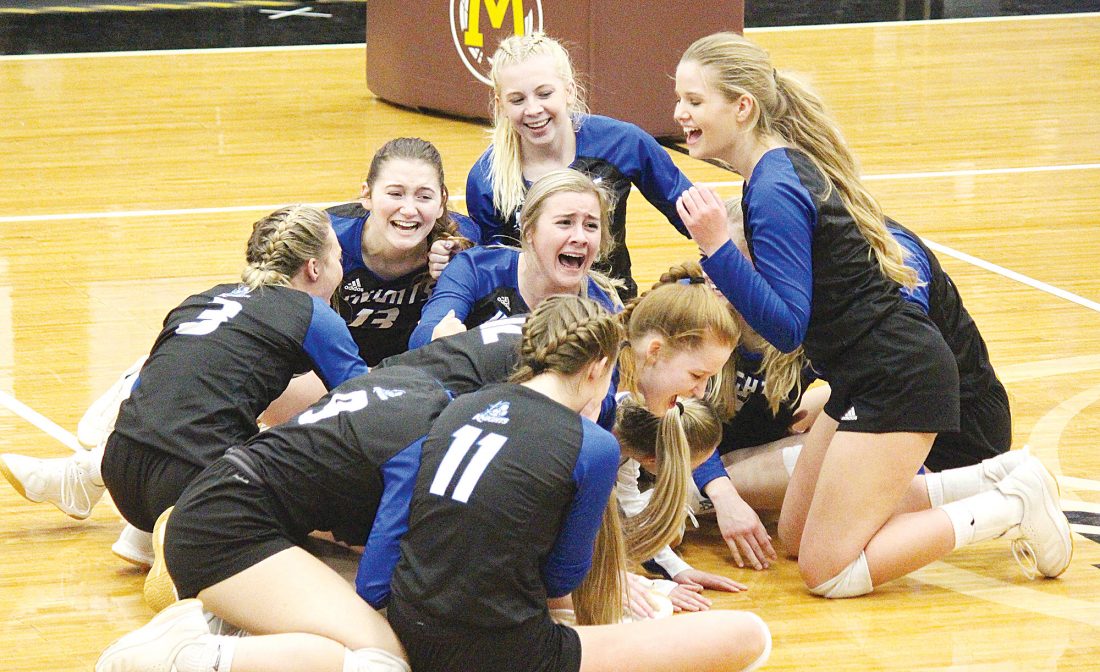 Alex Eisen/MDN The Our Redeemer’s volleyball team celebrates on the Minot Auditorium court after beating Rugby 3-1 for the Region 6 Tournament championship. The Knights have won six straight regional titles.

The Knights’ stranglehold on Region 6 continues.

For a sixth consecutive season, the Our Redeemer’s volleyball team will represent Region 6 at the Class B State Tournament.

ORCS (39-2-3) continued its ongoing dynasty with a 3-1 win over Rugby (31-5) in the regional championship match held Thursday evening at the Minot Municipal Auditorium.

“We got too comfortable (in the first set), but we got our confidence back,” ORCS head coach Kara Nunziato said. “In the first set, Rugby hardly made any errors. They were executing on every offensive opportunity. So, to see us take back the momentum in the second set and control the pace of the game was exactly what we needed to do.” 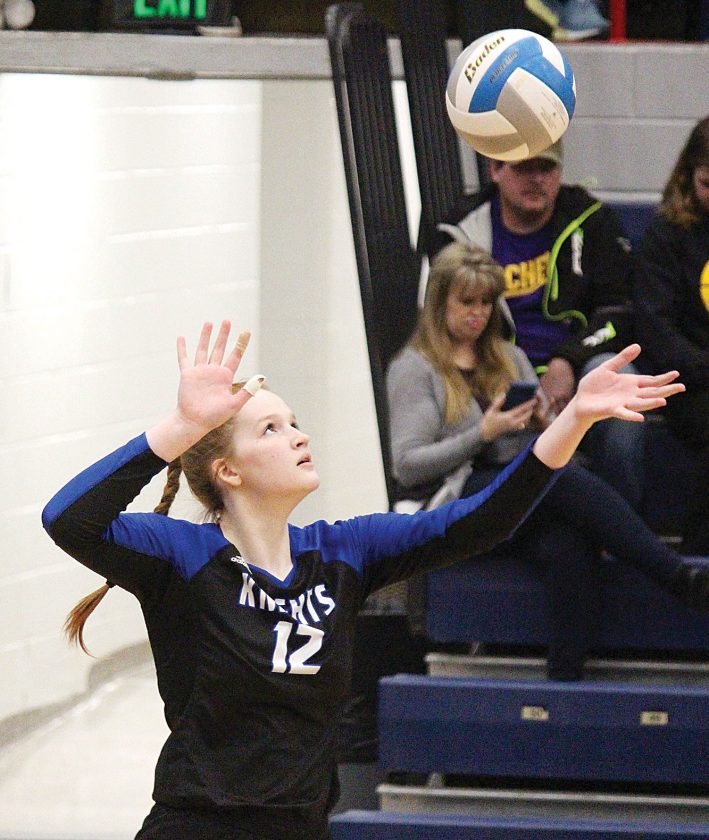 Alex Eisen/MDN Our Redeemer's senior Annie Folden serves the ball in the Region 6 championship match against Rugby Thursday in Minot. Folden was named the Region 6 Senior Athlete of the Year.

The opening set saw the two teams tied at 16, 17, 18, 19, 20 and 21 as the frame headed toward crunch time. Rugby, empowered by an electric environment, strung together the final four points.

“Our girls were ready to play,” Rugby head coach Jessica Fritz said. “I knew they could do that and I wish they could have kept with them a little bit closer. Keep that energy going. They just lost it a little bit.”

Dropping the first set was all the Knights needed to flip a switch.

“It’s not over, we can come back from it,” sophomore Cheyenne Lang said was running through her mind. “I think that was the fuel to our fire. Just what we needed to get us a little jump start.”

Aces from Annie Folden and Sydney Popinga forced Rugby into a timeout down 9-5 in the second set. The Knights scored six straight points out of the timeout to assert its authority.

“We talked about coming out with intensity,” Nunziato said. “It was OK to drop a set. But we needed to control the momentum of the match. And they executed from start-to-finish from there on out.”

An emphatic point-blank spike by Lang caused another Panthers’ timeout at 19-7. The Knights had found another gear.

“We sat back on our heels and let them take control,” Fritz said. “We didn’t have that emotion in the second two sets.”

ORCS raced out to a 5-0 lead to open the third set. The advantage was up to 14-6 after Lang unleashed a kill into the chest of Brooke Blessum and then put up a solo block.

Everything was going the Knights’ way as setter Eden Olson snuck a tip kill across that clipped the top of the net at 18-7.

Folden put the third set away with another powerful put down, 25-11. Folden was named the Region 6 Senior Athlete of the Year after pounding down a match-high 19 kills. Lang had 16 kills.

“I couldn’t have done any of this without my teammates and coaches pushing me every day in practice,” Folden said. “They make me the best player I can be.”

Kill after kill from Blessum tried to keep Rugby close in the fourth set, but it still wasn’t enough. The Knights’ defense always found one more dig to keep crucial points alive.

“Our defensive players are second to none,” said Nunziato, who was named the Region 6 Coach of the Year. “I’m so incredibly grateful for how they work day in and day out to make sure they keep our team rolling. They give us so many opportunities to put the ball away effectively.”

Olson, who was named to the All-Region team with Folden, turned many of the jaw-dropping digs into assists. She finished with 30 assists and seven kills.

“Our setter Eden (Olson) is so smart for only being a sophomore,” Nunziato said. “She is making big decisions and tonight she did a great job dishing what the defensive specialists kept alive.”

The Knights took the final set 25-21 and fell to the court in celebration. Champions again for a sixth time.

“It takes a lot of determination and I love working out with these girls every single day,” Lang said. “They put their hearts and souls into this sport. It makes it easy to push for (another title).”

Nunziato added about the six-peat: “It’s always difficult. It’s a mental game. It’s a physical game. And, when you play teams like Rugby, you have to be ready to be able to step up and play in big moments.”

“To make it to state is something many schools don’t get to experience,” Nunziato said. “We look forward to representing our district and region well. We still have to take it one set and one point at a time.”

In a consolation appetizer for the Region 6 championship match, the Des Lacs-Burlington volleyball team won a tightly contested four-set affair against Glenburn at the Minot Municipal Auditorium.

DLB erased a 12-2 deficit to win the second set but couldn’t close out the sweep in the following frame. The Lakers, however, had no intentions of allowing the regional third-place match to reach a fifth set.

The Lakers raced out to a 8-0 lead in the fourth and final frame. Glenburn did manage to get within a point at 13-12, but couldn’t quite close the gap completely.

For Glenburn, Lorelei McIver came through with a team-high 17 kills with McKenna Rolland adding 11 more. Morgan McIver and Nadia Post each had 15 assists. Jackie Ostlund collected a match-high 24 digs.

Jimmy Lafakis/MDN Minot High freshman Elise Altringer swims during a practice. The Majettes will participate in the two-day state competition in Bismarck today and Saturday.

Jimmy Lafakis/MDN Minot junior outside hitter Morgan Wheeler celebrates after scoring a point in the first set against Century during Thursday’s WDA Tournament in Jamestown. The Patriots defeated the Majettes 25-5, 25-10, 25-4.

Alex Eisen/MDN The Our Redeemer’s volleyball team celebrates on the Minot Auditorium court after beating Rugby 3-1 for the Region 6 Tournament championship. The Knights have won six straight regional titles.

Alex Eisen/MDN Our Redeemer’s senior Annie Folden serves the ball in the Region 6 championship match against Rugby Thursday in Minot. Folden was named the Region 6 Senior Athlete of the Year.