Playoff spot on the line as Magi football travels to Williston 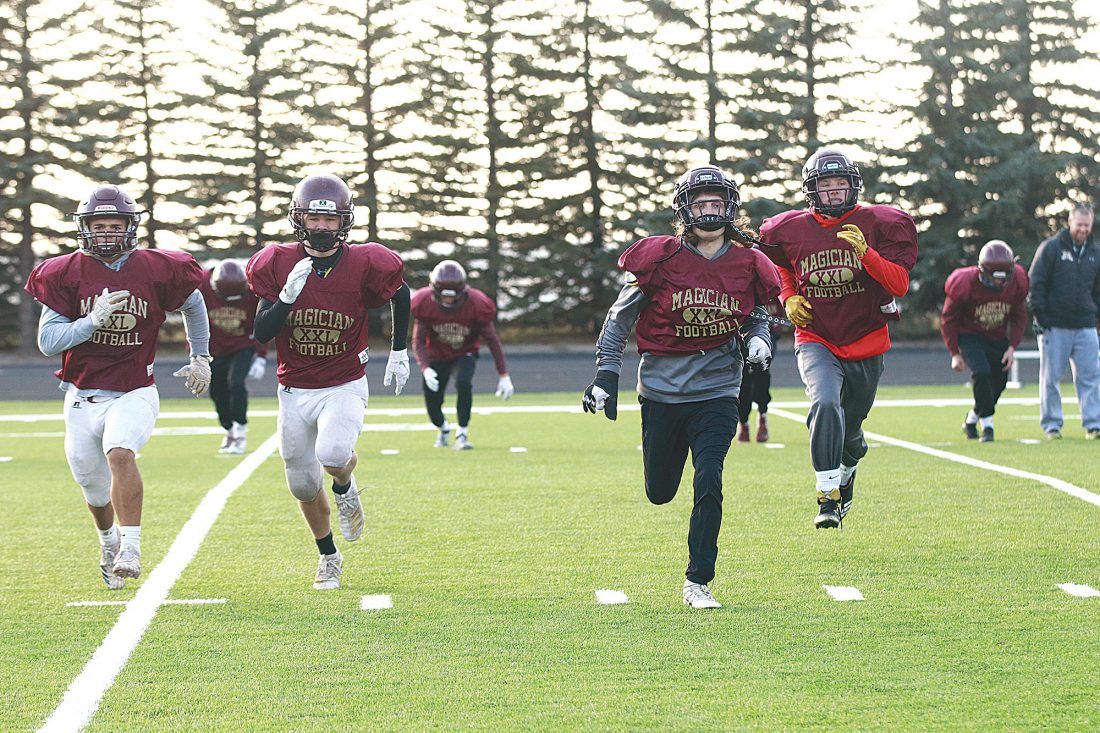 Although the Minot High School football team captured its biggest win of the season against Bismarck Legacy, Carter Peterson knows the Magicians’ work is not done.

The Magi (4-4, 3-3 WDA) will travel to Williston (3-5, 1-5 WDA) for a 7 p.m. Class AAA contest this evening. A win in the final game of the regular season would clinch a postseason berth. A loss and a Legacy win against Dickinson would mark the end of the season.

While this could be Peterson’s last game in a Minot uniform, the senior fullback knows what is at stake and said the Magi are working hard to play another week. The 27-0 victory over Legacy last week certainly gave the team a necessary boost.

“It feels really good for us,” Peterson said. “I think we will use the momentum to keep that high going.”

Minot is 2-2 on the road this season, with both of those wins (Dickinson and Jamestown) coming in WDA action.

“I think (our kids) have a healthy respect for our opponent after we have shown them some film,” Minot head coach Barry Holmen said. “Williston is big up front and physical. Not huge, but physical. You can tell that they have committed themselves to the weight room.”

Most recently, the senior-heavy Williston group lost 36-7 to Mandan on Oct. 19. Senior quarterback Charlie Whitlock went 14-for-25 through the air, accumulating 114 yards and a touchdown to fellow senior Kyle Miller.

“They would love to beat Minot,” Holmen said. “They would love to knock us out of the playoffs. Minot and Williston have a nice little rivalry because we are up in this part of the state. None of us care to go to Bismarck any more than we have to.”

Although the regional foes duke it out on the gridiron, the relationship assuages when the dust settles.

“When that game is over, we cheer for each other,” Holmen said. “We’re up here and everything else is down the interstate. In other sports, we try to take care of each other up here.”

Minot holds one crucial advantage — depth.The Coyotes must play spoiler off the strength of a thinner roster.

“Hopefully, our depth will help us through the course of the four quarters,” Holmen said. “The only way to do it is to line up every Friday night. If you want to be a good football team, you have to do it over and over again. Our question is, ‘Can we back up last week?'”

If the Magi want to avoid missing a second consecutive postseason, then they will need to answer Holmen’s inquiry affirmatively.

“It will definitely be a memory when it’s over,” Peterson said. “It’s a great group of guys, and the seniors really get along. We’re just so close.”