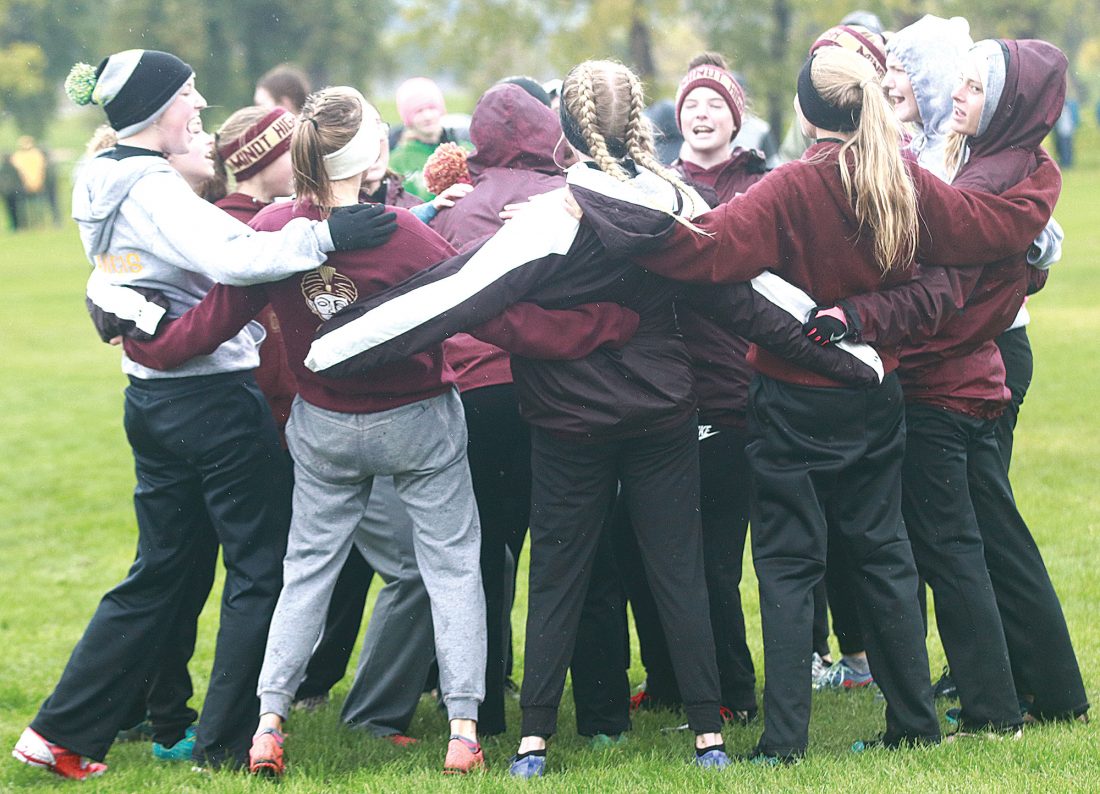 Jimmy Lafakis/MDN The Minot High girls cross country team huddles before a race earlier this season. The state meet will begin at 11 a.m. this morning at Souris Valley Golf Course in Minot.

The North Dakota high school cross country state meet will take place at Minot’s Souris Valley Golf Course this morning. The Class A boys race will begin at 11 a.m., with the Class A girls race following at 11:45 a.m.

Here is an overview of the local competitors:

Minot’s best finish of the season came in the year’s first meet. The Magi earned a third-place finish at the Heen/Ihmels Invite in Williston on Aug. 24.

Gehring said hosting the meet does not necessarily mean the Magi have a home-course advantage. If the Magi want to place high on Saturday, the young runners will likely need to step up.

“The younger guys are just learning how to race,” Gehring said. “Between two years, they’re really starting to get comfortable with what they are doing out there. They’ve got some seniors leading the way too, and they are pretty confident.”

One of those Minot seniors is Griffin Schaeffer. Schaeffer has served as a leader for the Magi during the campaign.

“I’m super-excited for (the meet) to be in Minot,” Schaeffer said. “Especially because it’s my senior year. I’ve heard that a lot of students and teachers are going to come out. We don’t really get that in cross country like you do in other sports. I’m excited to have people come and watch us, and it’s a really cool feeling that you’re part of the host team your senior year.”

Freshman William Barrington has stepped up for the Magi this year. Barrington said he has received a lot of support from close friends as he prepares for the race.

“We know everything that we need to know about this course,” he said. “We know where to kick and where to ease up a little bit. That (knowledge) will give us exactly what we need to give us our best time yet.”

Williston is ranked as the No. 1 Class A team in the latest coaches poll, while Dickinson’s Brady Yoder is atop the Class A individual standings.

After winning five races this season and maintaining an undefeated record in North Dakota, the Minot High School girls cross country team earned a spot in the No. 1 team in the final coaches’ poll.

“There’s a lot of strong runners and very close friends,” Minot head coach Carla Wahlund said. “That’s what has made this team to be even tougher this year. They know each other really well and they’ve done things well together. They’re not competitive amongst each other, but they (compete) in a way where they push each other in a positive way.”

Wahlund emphasizes running as a pack. Ten seniors have helped guide the Majettes during their stellar season, but younger runners have also posted key times.

“We’ve been working hard because we really want to win,” sophomore MaLiah Burke said. “Most of us have been together all of these years. We want to finish strong with this crew.”

Burke’s younger sister Maicee joins the Majettes as an eighth grader. Maicee said running at the high school level has been a great experience at a young age.

Both the Burkes will be expected to contribute in the state meet.

“I don’t think about how good (the opponents) look or how big they are,” Maicee said. “I just say, ‘I can do better.'”

The Majettes do not have any individual runners in the top 10 spots of the coaches’ poll, but the pack mentality has guided them throughout the year.

Jamestown’s Meghan Ford is slotted in the No. 1 individual Class A spot in the coaches poll.

New Town has earned the No. 1 ranking in the coaches poll. The Eagles also have two runners in the individual rankings, with Robert White and Addison Red Fox securing the respective first and seventh spots.

Rugby owns the top team spot in the coaches poll, with Brooklyn Bartsch and Quinn Neppl claiming the fifth and sixth individual positions. Last season, the Panthers finished as the state runner-up.

“We’ve had a good program for a number of years,” Rugby head coach Bill Jansen said. “I think our kids take pride in that. We are excited to compete. We know it is not going to be a cakewalk.”

The Panthers only have two seniors, but they use their depth to their advantage.

“We have quality at the top,” Jansen said. “We have a number of good, but not great runners. That makes us very competitive and gives us a good chance to win meets. Most of the kids have raced in big races throughout the years.”