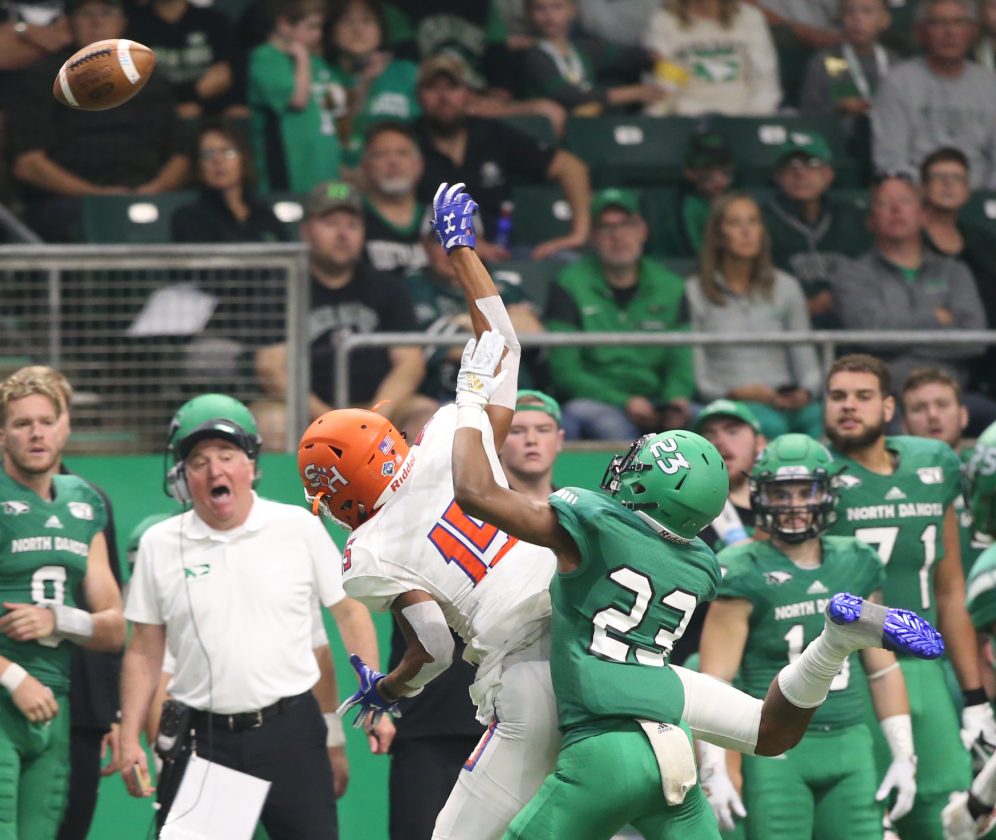 Schuster engineered two third-quarter scoring drives to lift the University of North Dakota Fighting Hawks to a 27-23 win over No. 24 Sam Houston State in front of 8,697 Potato Bowl fans at the Alerus Center.

UND, which beat the Bearkats for a second straight season, held strong in some white-knuckle final moments.

UND, leading 27-21 with less than four minutes to go, elected to take a safety instead of punting out of its own end zone.

That trimmed UND’s lead to 27-23 and the Fighting Hawks had to kick it back to the Bearkats.

After a strong kick return, the Bearkats’ final drive started at their own 47 with 3:29 remaining.

That’s where the Hawks defense held.

On fourth-and-2 from the 10, Sam Houston used a unique swinging-gate formation. The Hawks weren’t fooled, Bearkats quarterback Eric Schmid was stripped in the backfield and Jalen Morrison recovered the fumble for the Hawks.

UND kneeled out the remaining clock to improve to 2-1. The Hawks have a bye next weekend.

But the win should give the Hawks a big boost as they prepare for two monstrous FCS games in the next three weeks — against Top 10 teams Eastern Washington on Sept. 28 and UC Davis on Oct. 5.

UND finished with 281 yards of total offense while Sam Houston State ended with 280.

UND managed only 91 rushing yards on 30 attempts while Sam Houston finished with 162 on 50 attempts.

UND’s pass defense was solid, though, holding the Bearkats to 118 passing yards. The Hawks came up with three interceptions — two by Jade Lawrence. Noah Larson picked off the other pass.

The game was tied 14-14 at the half, but Sam Houston had nearly a two-to-one advantage in time of possession.

Sam Houston had the ball 34 minutes for the game.