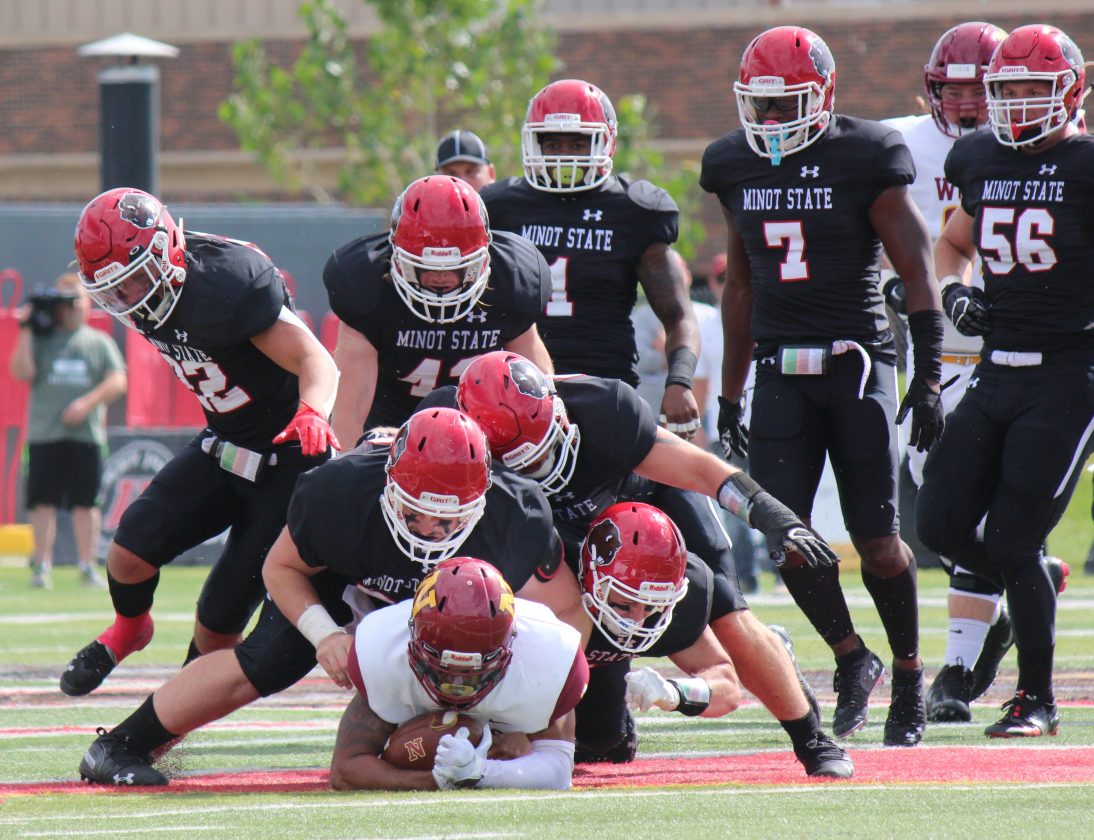 After 59 minutes and 57 seconds, the Minot State football team lined up 24 yards away from the end zone needing a touchdown to secure a walk-off win in the Beavers’ home opener.

Minot State junior quarterback Ben Bolinske took the snap and dropped back to pass. He quickly surveyed his options.

“They were sitting back in the end zone and anywhere I throw it, there was going to be a defender because I had to put it in the end zone,” Bolinske said. “The end zone isn’t very big. It’s not the CFL (Canadian Football League). I could have gone to (Kristopher) Bueno on the opposite side. But, the ball was tipped, and you never know. If you have a guy there, he could catch it.”

The pass was thrown toward senior receiver Lavante Bushnell, but was batted away and dropped incomplete in the back of the end zone. Game over.

Northern State (1-1) survived a scare from the much-improved Beavers (0-2) with a 14-10 road victory at Herb Parker Stadium.

Last season in Aberdeen, South Dakota, this NSIC contest was pretty much over after the first quarter with Northern State up 21-0. The Wolves cruised to a lopsided 42-16 win.

MSU pushed Northern State to the final horn this time around.

“It sucks when it comes down to a 50-50 play, and they got the right side of the coin,” Minot State head coach Mike Aldrich said. “But, as emotionally draining as it was at the end, if you step back and think about it, we were never in this position last year — throwing into the end zone to win.”

So close, and painfully agonizing as well.

“It hurts because we are just trying to get over that hump, and we are that close,” Aldrich said. “We are at that tipping point. We are building to it. Now, we just have to get past it. We are really close.”

Bolinske added: “You hate walking away from games with moral victories. Coach even said, ‘There are no moral victories here.’ But, last year, we were never in a spot with three seconds left to throw up a prayer and hope for a touchdown.”

MSU’s defense, which got ripped apart last week against No. 14-ranked Minnesota Duluth, stepped up and gave the Beavers a chance to win on Saturday. They held the Wolves to 365 total yards on offense and came up with nine third-down stops.

Northern State’s first two drives ended with punts. But, it was only a matter of time before the Wolves found a way across the goal line.

Quarterback Hunter Trautman shouldered off a tackle attempt by MSU safety Justin Coleman and dove into the end zone for the first score of the game with 5:31 left in the first quarter.

Northern State marched back down the field near the start of the second quarter and punched in a two-yard score by running back Preston Barr.

“We had a lot of errors on that drive,” Aldrich said. “That’s the one that kind of eats away at me. But, after that point, we stood pretty tall, brought a lot of pressure and created a turnover.”

The Beavers came to life at the end of the first half. A long, sustained drive — 75 yards on 12 plays — ended with Bolinske showing off his wheels and football IQ.

Lining up in a power single back, Bolinske rolled out to the left and beat everyone to the far pylon for MSU’s first offensive touchdown of the season.

“We try to get two guys on an island. So, if one of them comes, then they lose a guy, and I can toss it over the top of them,” Bolinske said. “But, no one budged, so I just punched it in.”

With less than two minutes left in the first half, Coleman got revenge for getting plowed over on Trautman’s touchdown run. The lurking safety watched a pass from Trautman get tipped up into the air and then land in his waiting arms.

“I should have scored,” Coleman said. “It was a good play by my corner (Latrell McCutcheon) for breaking up the pass and I thanked him for that.”

The timely interception placed the Beavers in the red zone with a chance to tie the game.

Northern State, however, put up a goal-line stand. A couple of stuffed runs and a drop on what would have been a rather tricky catch for Bushnell forced the Beavers to kick a 21-yard field goal on fourth down.

“I told them on first down, ‘Let’s manage it but if we get to fourth down and we haven’t scored, then kick the field goal,'” Aldrich said. “If I could have anything back, it’s probably not kicking the field goal. But, that’s hindsight.”

“We got three points out of it,” Coleman said. “We thought coming out for the second half down four points and the ball first, that we had the game.”

Instead, a punting competition broke out. Each team punted nine times in the contest with 11 punts coming in the second half.

MSU’s defense forced a turnover on downs and then six straight Northern State punts to shut down all seven of the Wolves’ drives in the second half.

The last punt gave MSU the ball back with 1:26 remaining on its own 33-yard-line. The Beavers only had one timeout to utilize.

The march was on for a game-winning touchdown drive.

“We mimic this in practice every week,” Aldrich said. “But, once you get into live bullets, all the pressure and stress comes on, and it gets a little chaotic.”

A questionable run call was used to try and catch Northern State off guard, but it backfired; wasting precious seconds. MSU quickly got back up to the line of scrimmage and completed a 13-yard pass to last week’s viral kick returner standout, Cory Carignan.

“The debate on the headset was do we take a shot and throw the Hail Mary, or try to get closer?” Aldrich said.

MSU elected to get closer and found running back Isaiah Hall in the flat for an extra 14 yards. Hall stepped out of bounds to stop the clock with three seconds remaining.

“We got a more manageable throw,” Aldrich said.

On the ropes, Northern State blocked the knockout punch by knocking away the final pass lofted toward Bushnell, who finished with four catches for 31 yards.

Both teams finished with 16 first downs, and Northern State outgained MSU, 365 to 276, in total yardage.

“I’m proud of my boys,” Coleman said. “The past three years we haven’t had a close game like that. You can tell the culture is changing.”

MSU, now riding a 10-game losing streak that dates back to last season, takes its new-found confidence into Bismarck next week to face rival U-Mary (0-2).

The Beavers only win last season was against the Marauders, 41-28.

Kickoff on Sept. 21 is set for 6 p.m. at the MDU Resources Community Bowl.