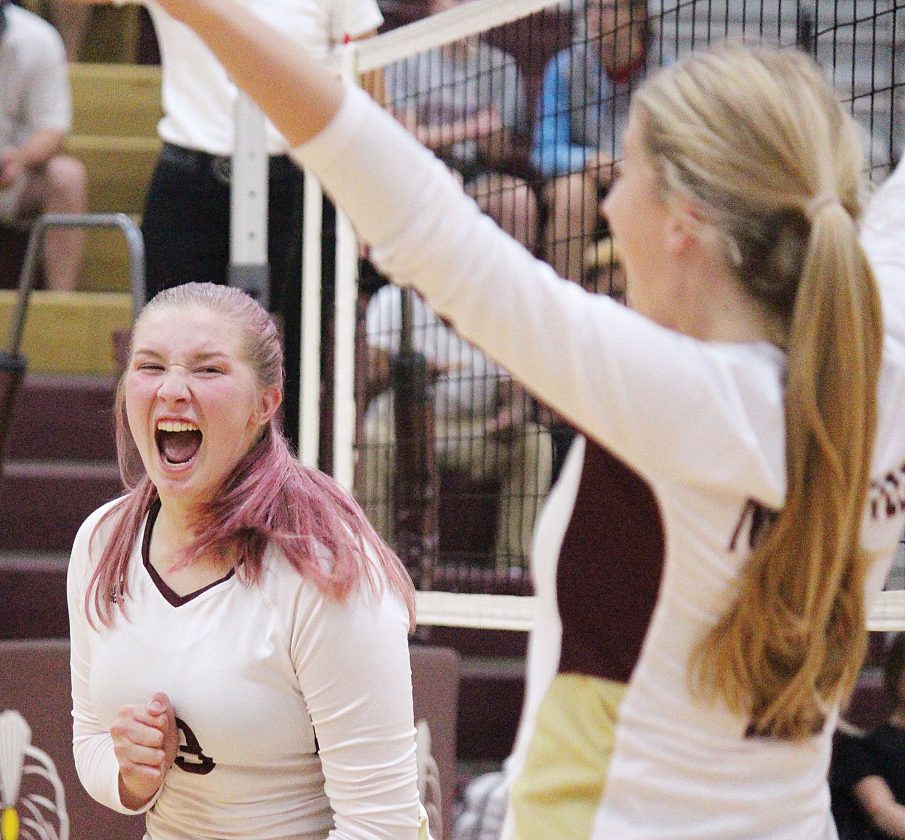 The Minot High School volleyball team couldn’t coast to a sweep Monday evening against lowly Turtle Mountain Community High School. The Majettes (5-7, 2-3 WDA) had to earn it Monday against the winless Bravettes (0-5, 0-4 WDA).

“If we can keep (the tempo) fast, we play so much better,” MHS head coach Sherry Carlson said. “That’s the style of play we have to stick with.”

The Majettes got off to a slow start in the opening set, but eventually got the gears turning and tied the score at 11-11.

Minot rolled from that point on for a 25-15 first set win.

“I think we went into it thinking we would get the first five (points) with some easy plays,” senior Jayda Bennett said. “But, we definitely need that fast pace and quick sets to really get us going.”

The Majettes quickly expanded the lead out to double digits and didn’t look back for a 25-12 second set win. Senior outside hitter Allie Nelson hammered down the set-winning kill.

“We have the capability, the quickness and drive,” Bennett said. “We just have to keep digging deep and finish it with less confusion at the end.”

The start of the third set was eerily similar to the first. TMCHS opened a four-point advantage and the Majettes stormed back.

Minot was back even at 8-8 after kills by senior Alyson Lucy and junior Morgan Wheeler, plus an ace from junior Paige Ackerman.

Building off those three consecutive points, the Majettes started to pull away by scoring six out of the next seven points.

The Bravettes, however, battled back to tie the third set at 17-17.

Then, out of a Minot timeout, TMCHS strung together five straight points to put the Majettes right back into another timeout down 22-17.

“They were just making it so hard on themselves,” Carlson said. “When we get the setup, it’s so easy. But, we couldn’t get the setups because we weren’t passing. We were working too hard to make something simple happen.”

Following three aces by Rosencrans and kills from Preslie Everson and Nelson, the Majettes eventually drew even at 23-23.

“It shouldn’t have been that close,” Everson said. “We need to come out strong from the very first set. Not give up, play our hardest and act together as a team.”

On Minot’s second match point, Nelson ended the contest with the Majettes’ 13th ace of the match, 26-24. Rosencrans and Nelson each finished with a team-high four aces apiece.

“Preslie (Everson) has been out a little bit because of a rolled ankle,” Carlson said. “So, she needed to get back in the saddle. She has been struggling with it, but she had a really good game today. Her mobility isn’t totally where it needs to be, but it was nice to see her come back and put up some big blocks.”

The Majettes travel to Bismarck on Thursday to face Century (9-2, 3-1 WDA).