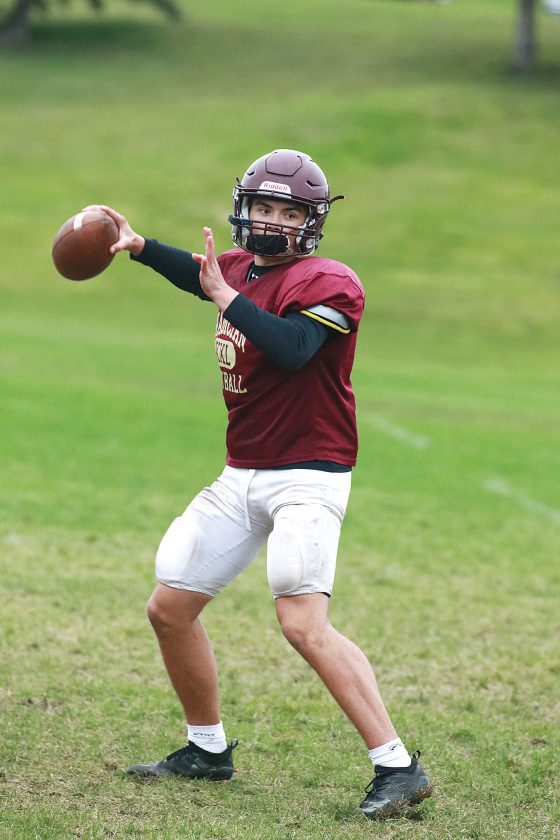 Jimmy Lafakis/MDN Minot High senior quarterback Jaxon Gunville prepares to release the ball at a practice. The Magi will host Mandan this evening at 8 p.m.

Preston Olson knows what’s at stake this week. The Minot High School football team has a chance to capture its first West Region win against Mandan, while also exacting some revenge in the process.

Last year, the Braves knocked the Magicians out of playoff contention with a 42-28 win in Mandan.

“We have to come with a grudge,” Olson, a senior offensive/defensive lineman, said. “We have to beat them this time.”

Mandan senior running back Austin Frey rushed for 103 yards in the loss.

“They’re excellent,” Minot head coach Barry Holmen said. “They’re really good at quarterback, wide receiver and tailback. Offensively, they will be plenty for our defense to handle. We have to be really solid and perform well as a unit defensively. Offensively, we need to score more than 14 points in a game.”

“I think we played hard against a good opponent last week,” Holmen said. “I think we improved from week one. I liked the fight of our team in the second half. When we fell behind, we cut it to one score and had a chance late in the game. We’ll build off of that, but we have to execute better.”

The gridiron showdown also carries special meaning for Minot. It will be the first-ever football game played on the brand-new “Magic Carpet” turf at Duane Carlson Stadium.

The Magi toed the turf and practiced on the new field several times.

“We play on turf virtually every other place we play,” Holmen said. “It’s fun that it’s our turf. We’ve got to prepare well enough, so we defend our turf. That is really our concern.”

Olson recognized the once-in-a-lifetime opportunity to coronate the turf.

Last year, Mandan finished 6-4 and clinched its first playoff berth in three years. Finding paydirt on offensive drives will be a key to beating the Braves, who have allowed 22 points per game this season.

“We’ve had opportunities in both previous contests to get more points on the board,” Holmen said. “We have stalled in the red zone. Hopefully, we’ll get down there a few times. We’ve got to cash in.”

Another important facet of the game comes via special teams. Kickoff and punt returns offer critical chances for the Magi to gain ground.

“We want to be excellent there,” Holmen said. “We want to change field position with the special teams units and possess the ball. Collectively, we all have to play better. We have to coach better and play better. If we can do that, we’ll have a chance against a really good Mandan team.”

The season is still young, and the Magi used their first two contests to work out some kinks. Those games were preparation for the main course of Minot’s season — WDA competition.

“If we are physical and stay disciplined, we can beat anyone,” Olson said. “They beat us last year. We don’t want to have that feeling again.”