Magi football prepares for away test against West Fargo Sheyenne 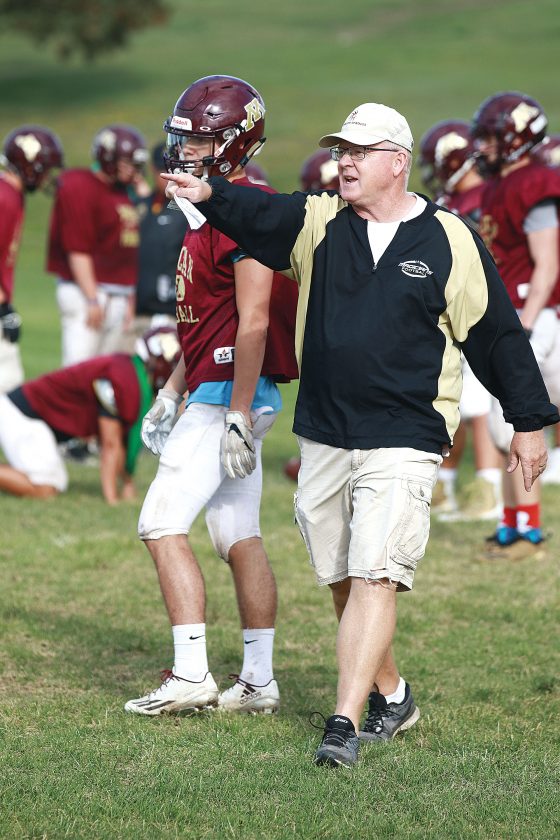 Jimmy Lafakis/MDN Minot High head coach Barry Holmen calls out instructions during a practice.The Magi will square off against the West Fargo Sheyenne Mustangs this evening at 7 p.m. in West Fargo.

During Minot High’s 14-12 victory over Grand Forks Red River on Aug. 30, senior defensive back Triston Emke learned a few things about his teammates. The Magicians and Roughriders squared off in a slugfest, and Minot found a way to eke out a nail-biter.

“Even after our team gets down a little bit, we’re willing to fight back,” Emke said. “We kept fighting throughout the game. There were obviously some mistakes. It was the first game coming off a long offseason, but I think we played a pretty good game.”

Although the Magi started 1-0, last week’s win is just a memory. Minot will face a unique test this week against the West Fargo Sheyenne Mustangs.

Although the Mustangs sprinkle in aerial threats, their primary offensive weapon is an option attack. The offense specializes in misdirection and lead blocking. 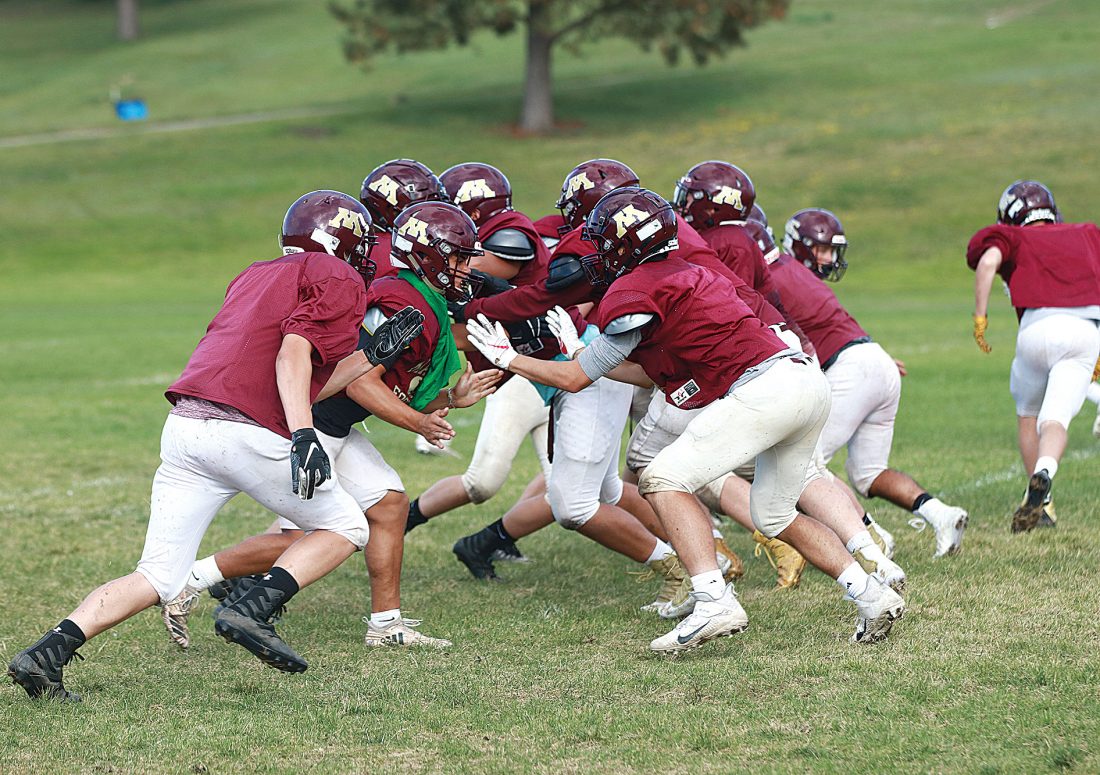 Jimmy Lafakis/MDN The Minot High football team runs a play during a practice. The Magi will square off against the West Fargo Sheyenne Mustangs this evening at 7 p.m. in West Fargo.

“If you try to take the dive when you’re supposed to take the quarterback, that’s when you give up big plays,” Minot High head coach Barry Holmen said. “We want to be really disciplined on defense. It’s going to be a challenge, because they are very talented.”

Warkenthien mixed up the offensive onslaught by finding wide receiver Tyler Terhark for 136 yards and a 15-yard score.

“It is very hard to defend,” Holmen said. “It’s something unique and you don’t see it all that often. The challenge is preparing for that scheme in just one week. That’s hard.”

The teams have a limited but significant history, as Minot defeated Sheyenne twice in previous playoff matchups. In 2015, the Magi took a 35-7 victory in the Class AAA semifinal round.

Minot also earned a 66-37 win in the 2017 Class AAA quarterfinals. Now, the Magi will face the Mustangs for their first-ever regular season matchup — after their longest road trip of the season.

“We travel on a bus all the time,” Holmen said. “Sometimes, it’s nice to get on a bus and just relax. You control the timing of all the preparation. You can get a good pregame meal on the road. Sometimes, being on a bus isn’t so bad.”

According to Emke, the Magi will typically listen to music as they travel on the bus. When they arrive at their opponent’s home turf, they will pray during a team huddle.

“I just try to keep my jitters down and keep my mind off the game on the way down there,” Emke said. “Once we get down there, that’s when it’s game time. It’s time to focus up and get ready for the game.”

At first, Emke will listen to something a bit more relaxing, usually country music. As the Magi approach enemy territory, he might switch to some Eminem — specifically the rapper’s 2002 smash hit “‘Till I Collapse.”

The final game before WDA play allows teams to find themselves and work out any lingering kinks. The Magi will face a distinct challenge this week, squaring off against a Mustangs team that finished 9-2 a season ago.

“We have a lot of hard workers on the team,” Emke said. “I think we’re excited to go face this challenge, especially with how we are perceived as a non-physical team. I think we are ready to prove some people wrong and give ourselves a new identity.”

Jimmy Lafakis/MDN Minot High head coach Barry Holmen calls out instructions during a practice.The Magi will square off against the West Fargo Sheyenne Mustangs this evening at 7 p.m. in West Fargo.

Jimmy Lafakis/MDN The Minot High football team runs a play during a practice. The Magi will square off against the West Fargo Sheyenne Mustangs this evening at 7 p.m. in West Fargo.