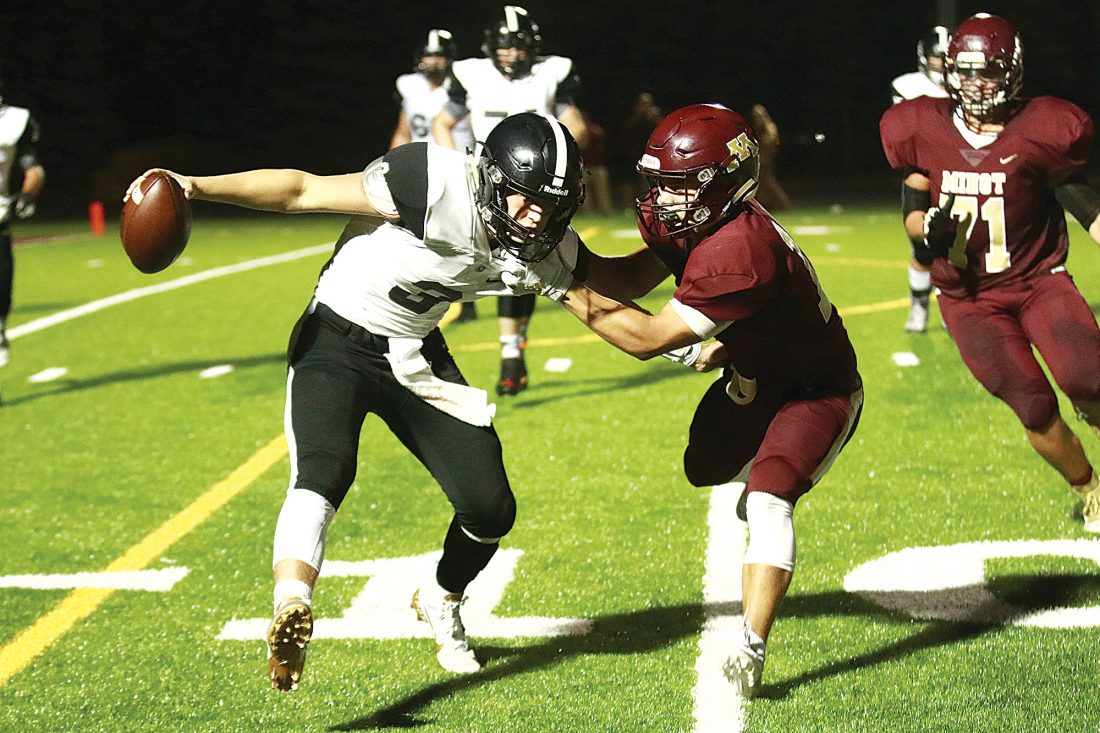 Klein, Mandan’s key senior wideout threat, used his 6-foot-7 frame to haul in two touchdowns during the Braves’ 18-14 victory over the Magicians.

After Mandan senior running back Austin Frey punched in the game’s first score late in the first quarter, the Magi responded in kind.

Minot blocked the ensuing extra point attempt and marched down the field. Senior quarterback Jaxon Gunville found senior running back Payton Philion for a 15-yard touchdown reception in the corner of the end zone.

Junior kicker Dustin Jacobson’s extra point attempt went wide left. Both teams stalled from there, as Minot could not cash in after a run after a botched punt led to a first down.

Klein’s first major contribution would come shortly after. The wide receiver made an acrobatic one-handed catch after bobbling the ball toward the end zone.

He fell on the brand-new maroon turf, converting off a deep 43-yard pass from senior quarterback Dane Carlson. The two-point pass fell incomplete.

Carlson found Klein once again on a 15-yard scoring route in the third quarter.

The Magi subsequently pulled some tricks from their sleeves. Consistent Mandan penalties led to a Minot safety, pushing the score to 18-8.

Jacobson’s kick sailed left again, and the score read 18-14. The failed kick continued a peculiar streak, as both teams were unable to convert on any extra points throughout the game.

Mandan drove the ball down the field, but the Magi defense held on a fourth-down stop. Minot took over at their own 40-yard-line.

On fourth down, Philion made a one-handed catch and sped down the field. The Braves stopped him just short of the first-down marker.

Carlson kneeled out the clock, and the game was over. Mandan escaped with an 18-14 road WDA victory.

Minot fell to 1-2 (0-1 WDA), while Mandan improved to 2-1 (1-0 WDA). The Magi will travel to Dickinson next week, while the Braves will host Bismarck High. Both WDA contests will begin at 7 p.m.