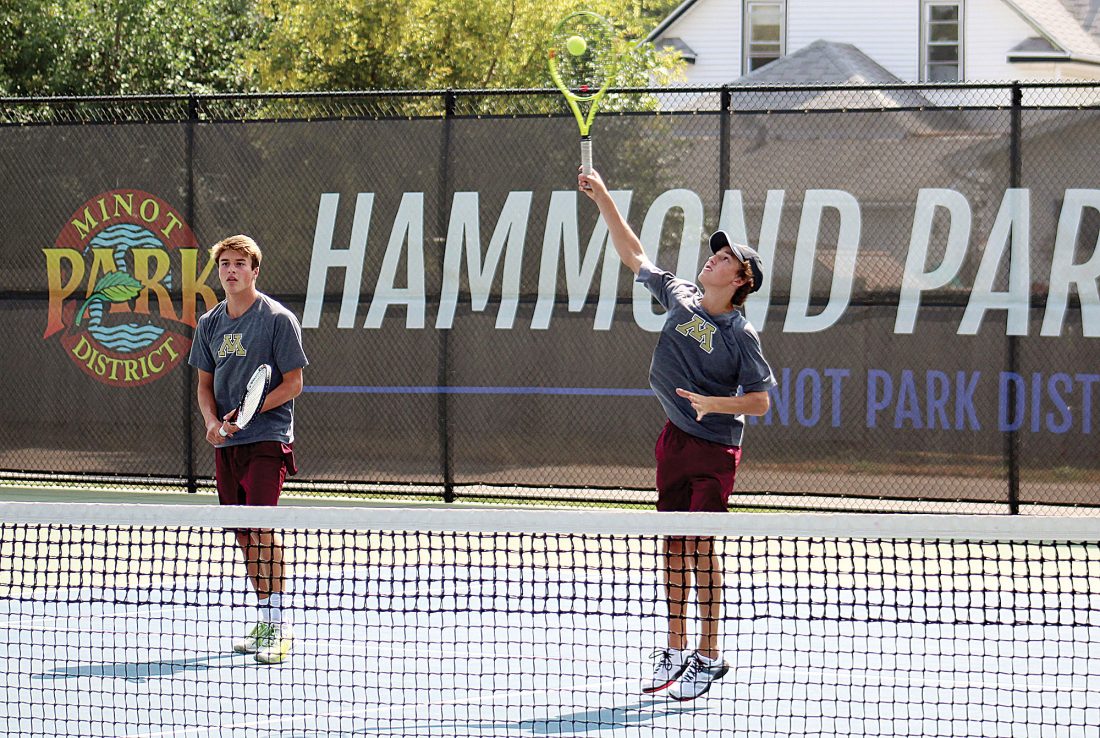 Ashton Gerard/MDN Minot High's Zach Diehl (right) takes a swing while Jack Wolsky looks on during a doubles match at the beginning of last season. The Magicians hit the court for the first time today for a round of exhibition matches before the Minot Round Robin Saturday.

In the past, the Minot High School boys tennis team has come to the courts dripping with experience and confidence. This season will be different, as the team is only returning three experienced varsity players.

“This the the first year in a long time we’ve had a young team,” sophomore Zach Diehl said before the team’s practice Wednesday. “We’ve been old throughout the years.”

Diehl along with junior Ridge Jaeger are considered two of the experienced players on the court, each with two varsity seasons under their belts. Joining them to help lead the team is lone senior Jack Wolsky.

“It’s definitely different to only have one senior,” MHS head coach Scott DeLorme said. “With that, we look at our other guys both Zach Diehl and Ridge Jaeger, they’ve played varsity now for two years minimum so we have some guys who have been there.”

The team will be missing the strong, vocal leadership of now graduated seniors Mason Diehl and Peyton Huss. Also missing from the roster are now-graduated Rory Taney and sophomore Eric Wentz.

“Mason’s little brother, Zach, will be our No. 1 player and Jack Wolsky is a senior so those two right there, we’ll look to them right away to do some things for us from a leadership standpoint,” DeLorme said. “The bigger thing with those two is that it’s probably going to be more on the court than vocal. But if they go out and they work hard in practice and they work hard in matches and have success, the other kids are going to follow suit.”

With the experienced players, the team will be throwing three to four guys out on the court that haven’t had varsity experience yet. The beginning of the season will be an adjustment period for the team.

“There’s not as many people to look up to,” Jaeger noted. “We’re kind of like the old ones now so as all the young kids come up we have to be good role models to them because they’re just learning too.”

In an early coaches poll taken in the WDA, defending West Region champions Bismarck Legacy edged Minot as the potential No. 1 contender in the West. Legacy received four first place votes with a total of 34 points. Minot High was just one first place vote and one point behind with 33. Bismarck Century came up third in the poll with 26 points and no first place votes.

“We’re excited, we have a nice young crew,” DeLorme said. “We’ve got a nice mixture of young players with experience and then just simply young kids without experience but we have some talent from No. 1 to about No. 9 or 10 we feel really confident in that crew.”

With the pieces falling into place for the young Magicians, DeLorme says the team has potential to have a decent year.

Their first test comes this weekend, starting today with the Minot Jamboree – 3-2 exhibition matches with four teams from the West Region starting at 10:30 a.m. at Hammond Park.

Saturday’s Round Robin will host every team in the West Region with matches starting at 9 a.m. at Hammond Park.

“That’s just going to be a day, well two days with the Round Robin the following day, for them to simply get match play experience,” DeLorme said of the younger players this weekend. “They’re going to get a chance to see the majority of the West Region, everybody’s here Saturday and we play four teams on Friday.”

The team will be mixing and matching it up for both days as DeLorme and the coaching staff figure out where each athletes shines the brightest on the court.

“We’ll probably play some of our young guys with our experienced players just to have a little comfort level on the court when matches might get tight,” DeLorme added. “If we can get a lot of match play and experience out of those two days, that’s going to be a huge benefit to our young guys.”