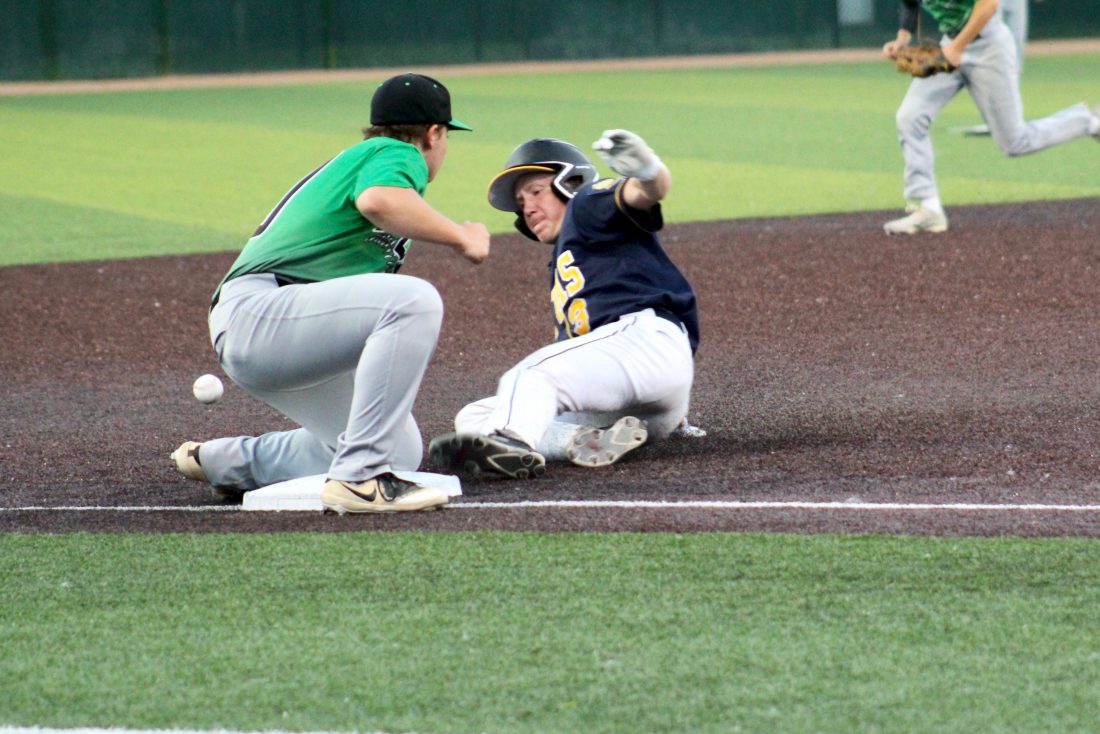 Ashton Gerard/MDN Minot Vistas' Chase Burke slides into third base in the first inning of a game against Pierre Post 8 Friday evening during the HP Invitational at Corbett Field.

Plenty of baseball was played Friday at Corbett Field, as the Minot Vistas hosted the opening pool play round of the Heilman’s Performance Invitational. Six teams split into two pools — Pool 1: Vistas, Saskatoon and Pierre. Pool 2: Bismarck, East Grand Forks and Regina — played six games Friday to determine the seeding for the knockout round being held today and Sunday.

The Minot Vistas made a statement in their first contest. Starting pitcher Aydan Almy threw a complete-game shutout against Saskatoon in a 10-0 mercy-rule win after six innings.

Minot scored two runs in the first inning and then pulled away for good with eight more runs across the fourth, fifth and sixth innings.

Brock Nesheim went 3-for-3 with two RBIs and a double. Dylan Vigested matched with a 3-for-3 performance at the plate with a double as well. Derek Nygaard and Alex Schimke each collected a pair of RBIs.

The defeat was Saskatoon’s second of the day. Pierre knocked them off, 5-1, to start the tournament.

With those two results, Minot and Pierre had each secured a spot in the knockout round before playing each other in the final game of the day. The two teams faced off for seeding in the nightcap — the winner being the No. 1 seed out of Pool 1 and the loser being the No. 2 seed.

The game got underway around 9:30 p.m. due to other games running long and pushing back the start time.

At press time, the Vistas were leading 4-2 in the sixth inning.

The invitational semifinal games will be held at 11:45 a.m. and 2 p.m. this afternoon at Corbett Field. The championship is scheduled for 1 p.m. Sunday.