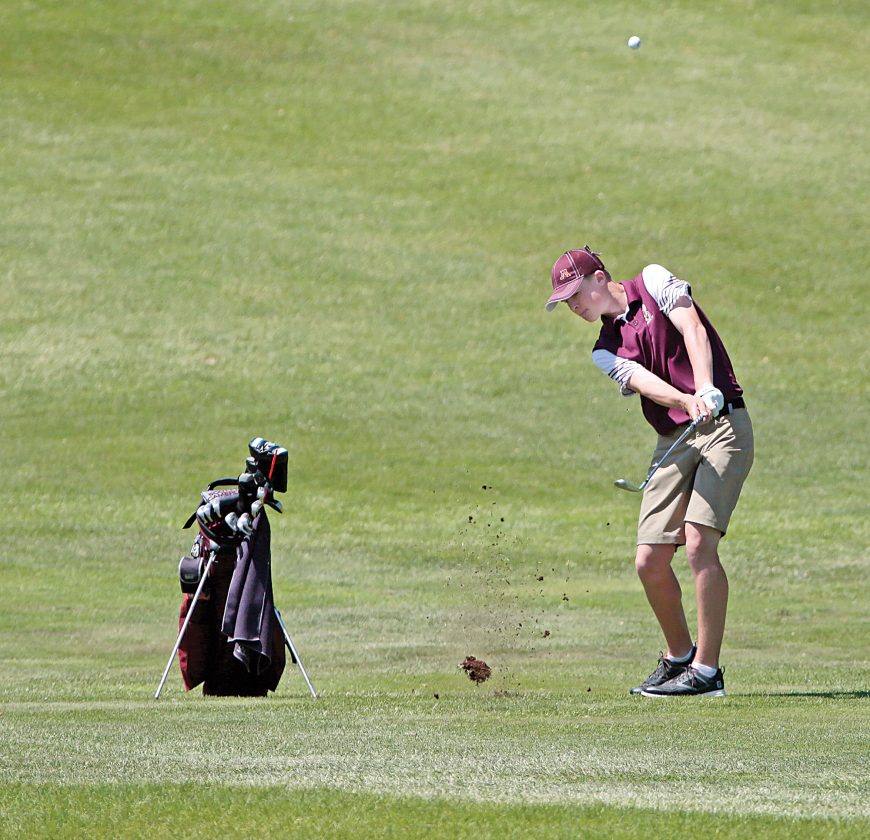 Dave Samson/FNS Minot High School sophomore Gavin Argent sends chunks of grass into the air with a swing on Wednesday during the Class A boys golf state tournament at the Bois de Sioux Golf Course in Wahpeton.

WAHPETON – One senior, two sophomores and a freshman.

That’s the rotation the Minot High School boys golf team leaned on Wednesday at the Bois de Sioux Golf Course in the second and final round of the state tournament. Despite not having the most experienced group of the field, the young core held its own and led the Magi to an eighth-place finish (639).

“We played better today,” MHS head coach Shane Hannegrefs said. “Most of our kids’ scores went down. We still fought with consistency here and there, but this experience is valuable for our younger guys.”

For the Magi, Gavin Argent led the charge.

The sophomore shook off a double bogey on Hole No. 8 with back-to-back birdies on Hole No. 15 and 16. Argent finished with a 72 (+1) on the day for a combined tournament score of 148 to secure a two-way tie for eighth place.

“It’s nice to see how you stack up against all these really good golfers,” Argent said. “I played really solid golf today. It was just nice to play this well and put it all together in one day.”

Ashton Heilman proved to be the second-best golfer for Minot.

After shooting an 82 (+19) yesterday in his first taste of state competition, the freshman found his composure on Wednesday. Heilman shot a 80 (+9) for a combined score of 162 and landed in a two-way tie for 41st place.

“I was definitely nervous on my first tee yesterday,” Heilman said. “But I was hitting my driver better on Day 2…I’m really looking forward to improving next year. I feel like I can get better at a lot of things.”

Not far behind Heilman on the scoreboard was sophomore Jacob Theis, who improved two strokes on Wednesday with an 81 (+10) to lock up a two-way tie for 45th place with a combined score of 164.

Finally, senior Otto Langhans finished his high school career in a two-way tie for 47th place (165). The senior went out in style by sinking a birdie on the last hole. Also graduating for Minot is senior Alec Maragos.

“Alec (Maragos) didn’t really play many tournaments, but he’s a really good kid to have on your team for character,” Hannegrefs said. “And Otto (Langhans) really became a leader to our team. He brings out the best in our kids.”

With the 2019 season in the books, the Magi now shift their focus to the future. With three of their Top 4 finishers set to return plus junior Jack Demke, who missed this state tournament due to a family emergency, the future is looking bright for Minot.

“I’m really excited for next year,” Argent said. “It’s good that we have a lot of young guys with future potential. Now we need to get out on the course more so we can get better and have a chance against the East (Region) guys.”