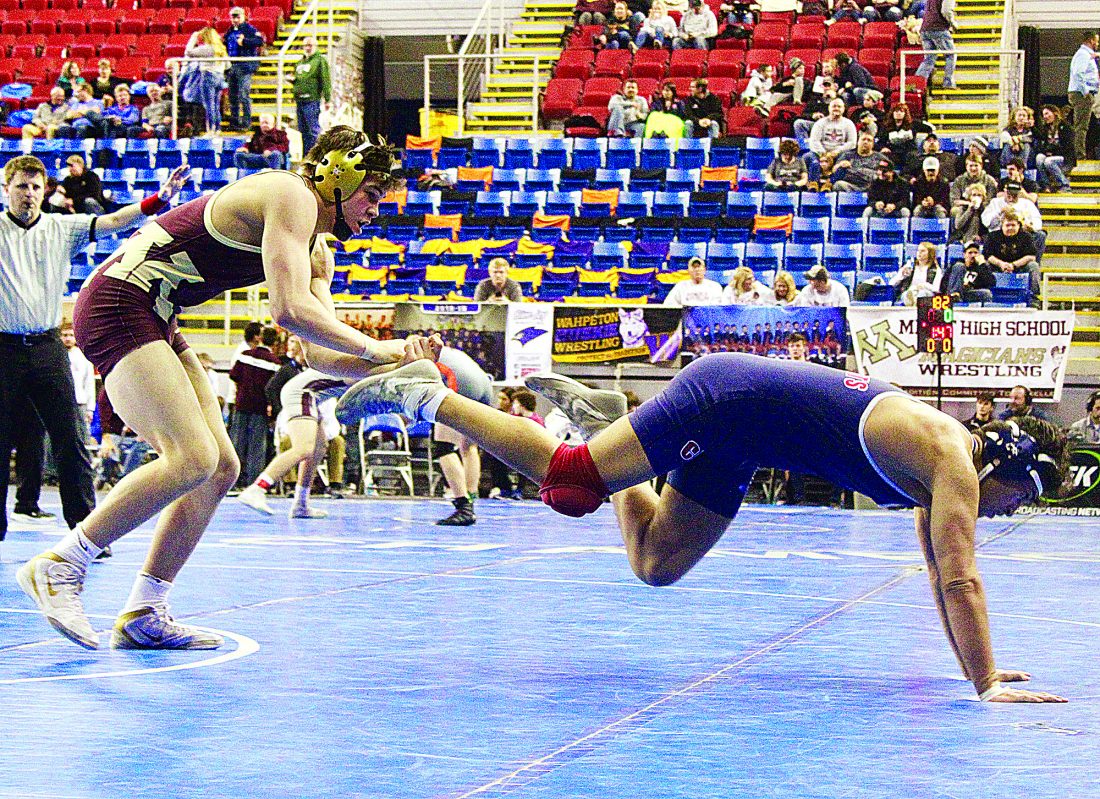 FARGO — It would have been easy for the Magicians to throw in the towel.

The No. 4-seeded Minot High School wrestling team’s hopes of a state dual title came to a screeching halt Friday afternoon. After defeating No. 1-seeded West Fargo on Thursday in the opening round, the Magi seemed poised to pull off another upset when they jumped out to an early 9-3 lead over No. 2 Dickinson in the semifinals.

But the Midgets shook off the slow start and hit the burners to earn a convincing 52-13 victory, sending Minot down to the third-place dual against No. 3 Bismarck Century.

Rather than mailing the consolation dual in, the Magi came out plenty motivated and emerged with a hard-earned 41-33 victory to take third-place honors.

“There are guys that quit at this tournament all the time,” MHS head coach Justin Racine said. “It’s tough, it’s grueling and it’s mentally draining. But we just battled through, so that’s exciting to see.”

Jacob Carmichael set the tone in the opening 182-pound match against Century’s Anthony Carranza. After owning the first two periods, the junior finally finished things off in the third period by bulldozing Carranza and securing a pin to give his team a 6-0 edge.

Now trailing 15-12, Kelby Armstrong got his team back on top in the 113-pound match. The junior gave his team an 18-15 lead by securing a fall in the second period against Century’s Neal Bohrer.

But the Patriots kept battling for the next five matches and ultimately took a 33-25 advantage with three matches remaining.

That’s when Trevon McClanahan launched the comeback in the following 152-pound match. The junior swung the momentum back in the Magi’s favor by pinning Century’s Dany Asonkeng in the second period to trim the deficit to 33-31.

Chase Burke did the rest. The sophomore didn’t get a pin against Century’s Bryant Nelson in the 160-pound match, but he didn’t need to. Burke imposed his will for three periods and earned the 9-1 major decision win to give Minot a late 35-33 lead.

The four points sealed the Magi’s win, as freshman Jordin Lennon went uncontested in the final 170-pound match to give Minot a 41-33 victory.

“I’m glad we were able to come away with the run,” Carmichael said. “We kept fighting. Our guys knew what we needed to do, and we got it done.”

In addition to the third-place team win, the Magi are sending two wrestlers to their respective individual championships.

First to secure his spot was Carmichael, who gutted out a 4-2 win over No. 2-seeded Tanner Jarrett from Dickinson in the semifinals of the 182-pound bracket. After going 0-2 last season in the 170-pound bracket, Carmichael is now one win away from a title. He’ll take on West Fargo’s Cade Pederson, the No. 1 seed, today.

“I was just thinking in overtime ‘I want it,'” Carmichael said. “I lost out last year, and now I’m at the (championship), so it’s a good feeling. It makes me so happy.”

Also cementing his spot in the championship round was Armstrong. The junior showed why he’s the No. 1 seed in the 113-pound bracket, earning a 5-0 decision win over No. 5-seeded Joel Bowman from Jamestown in the semifinals.

Armstrong will be in search of his second straight individual state title today when he takes on Wilfried Tanefeu, the No. 2 seed, from Bismarck High in the title match.

“It would mean a lot (to win),” Armstrong said. “I just have to go out there, wrestle like myself and do my job.”