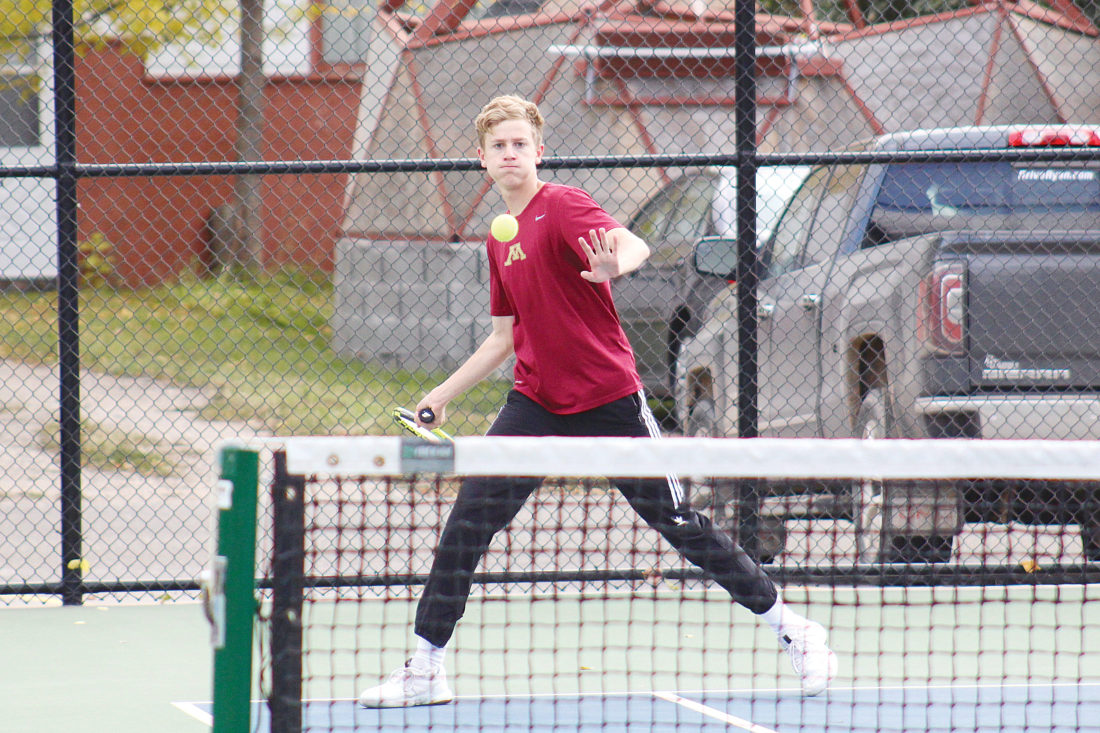 With many fresh faces on the varsity roster, the Minot High School boys tennis team has gone through some growing pains. But, as the season has progressed, so has the team’s experience leading into the West Region Tournament.

“We’ve played some good tennis and we’ve played some tennis where we definitely look like we’re inexperienced,” MHS head coach Scott DeLorme said during practice Wednesday. “But the last couple of weeks, I think we’ve been playing better tennis. We’ve been competitive with Bismarck Legacy twice even though we’ve been on the short end… Hopefully, we can have one more good weekend to keep playing better.”

The Magicians enter the WDA Tournament with a 10-6 record, 5-1 in the West Region. Their one conference loss came from Bismarck Legacy (17-2, 6-0 WDA) on Sept. 24 by a slim margin of 5-4. They also lost to Legacy earlier in September during a non-conference match that ended 4-3 for the Sabers.

“First off, we want to make it to the state tournament, that’s our No. 1 goal. Deep down we definitely would like another chance to play (Legacy), but we have Bismarck High ahead of us,” DeLorme said. “Also in our draw are Williston and Mandan who, on the right day, are very solid teams, so Legacy is kind of a long ways out.”

For senior Rory Taney, Legacy has been a hurdle the team has been trying to cross all season and feels they have the right attitude to do so at the West Region Tournament.

“We’re hopefully going to be the No. 1 seed by the end of the WDA,” Taney said. “We think we’re the best and we’re looking to prove that we’re the best.”

On the individual side, DeLorme is confident in the crew selected to play in the individual tournament that starts tomorrow. Mason and Zach Diehl will team up at doubles along with Peyton Huss and Jack Wolsky.

“The Diehl brothers are definitely capable of winning the region,” DeLorme said. “They’re two solid players (and) they get along well on the court most of the time.”

Taney is out to make an impression on the singles side of the individual tournament. Having gone in unseeded before and finishing seventh at the West Region Tournament last year, he’s ready to see where he will land this time.

“I think I can do even better this year,” Taney said. “Mentally preparing is a big deal.”

DeLorme is hoping to get five individuals qualified for the state tournament this weekend.

With each match, the young Magi grow more and more experienced and the team is excited to see where their potential has grown to.

Wolsky and Eric Wentz, who hadn’t played varsity before, have turned into the team’s most solid and consistent players at No. 4 and No. 5 singles, according to DeLorme.

“The improvement of our depth and that experience has been a huge bonus for us,” DeLorme said.

After the West Region Tournament comes a completely different type of beast, going to state and facing the east.

“We have good players out west, we just need to believe it,” DeLorme said. “Our girls proved that last spring that if you go in with the mindset that you can play with (the east), they’re beatable. They’re as beatable as any other high school kid in the state.”

Looking ahead to the state tournament, the Magi know the east is incredibly talented. DeLorme hopes the west can show up, have a decent tournament and end up in the semifinals.

“You have to give them credit, Grand Forks Red River has been as dominate as you can get for many years, Fargo South is the defending champions and Grand Forks Central this year is probably the best team in the state,” DeLorme said. “There’s a lot of talent over there, no doubt, but if we can get west kids to believe they can play with them, then anything is possible.”

The team portion of the West Region Tournament begins today at 9 a.m inside the Cameron Indoor Tennis center, located at 3520 Main Street N. The Magi will begin the day facing Bismarck High at 10:15 a.m.