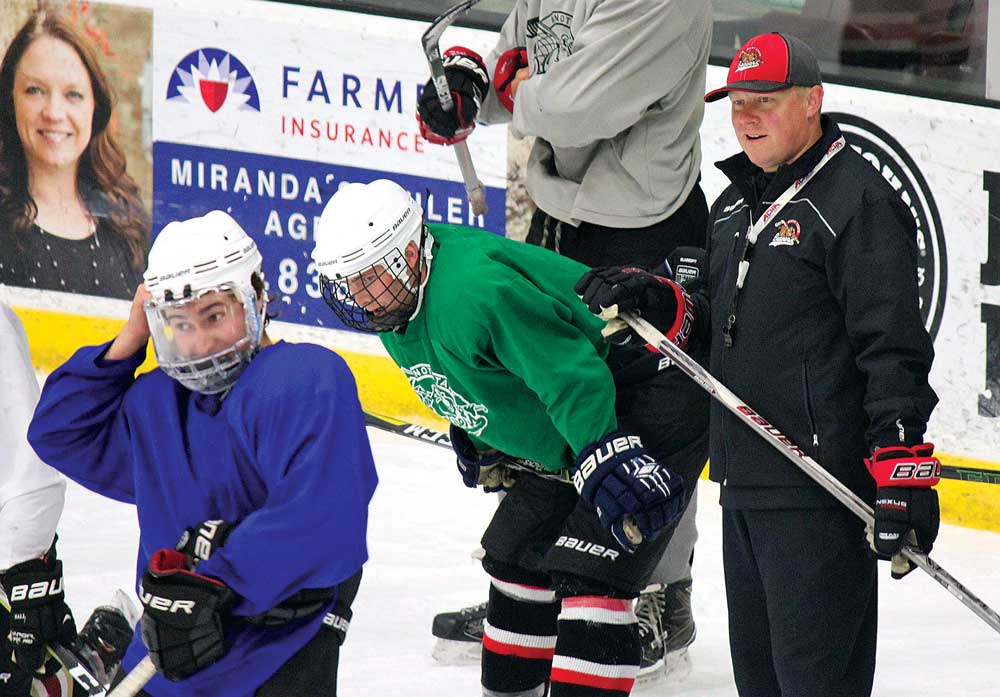 Sitting on the team bus parked outside the OhioHealth Ice Haus rink in Columbus, Ohio, Minot State men’s club hockey head coach Wade Regier and assistant coach Wyatt Waselenchuk vented their thoughts while waiting for the team to board the bus following a 4-2 season-ending defeat to No. 5-seeded University of Illinois in the ACHA Division I National Tournament semifinals.

The frustration of failing to win a national title was prevalent. For a third straight season, MSU had skated into the National Tournament with the No. 1 overall seed and was unable to capture the program’s second national championship.

Regier and Waselenchuk, in trying to comprehend what had just happened, discussed the Beavers’ downfall in the somber setting and how to prevent this devastating moment from happening once again.

The consensus was pretty unanimous: Bring in and develop more players who can score the puck. And that’s exactly what MSU attempted to do this offseason.

“There is no shortage of offensive skill,” Regier said. “It’s no secret that last year we would outplay and dominate teams, but we just couldn’t score. We feel like we have kind of addressed some of those areas.”

The rookies won’t have to carry that responsibility alone.

“Since we brought in 9-10 new guys, I thought it would take a couple of weeks to gel with them. But, I think everyone is working well together,” Johnson said. “Wade (Regier) and (Waselenchuk) did a good job of bringing in the freshmen. They can play hockey and they are good. We got a bunch of them that can score some goals and make some big hits.”

Preseason training camp has been about building chemistry and get the new guys up to speed. It’s a process that isn’t going to happen overnight, but that doesn’t change the aspirations the Beavers have each season.

“For us, our goal is to get to the National Tournament and win the title every year,” Regier said. “But, I think collectively we are going to take a big deep breath because this is the youngest team I have ever had in nine years.”

One of the newcomers looking to make an immediate impact is defenseman Cody Longie, a transfer from Dakota College at Bottineau.

“We lost Austin Yano, a three-time All-American, who offensively quarterbacked our power play,” Regier said. “Now Cody Longie can step in and take that role. And he is a junior, so there is some experience there with him transferring in.”

“I think it’s going to be communication,” Bollefer said in response to what the Beavers need to improve on. “New team, new guys. We got to learn what each other does at the beginning of the season. But, after that, I think we will be fine.”

The MSU defense has plenty of experience backing them up with three returning goalies in Joshua Bykowski, Holden Kurtz and Brey Effertz. All of which had goal against averages below 1.50 and a save percentage above 92.5 percent.

Put everything together, mixing young with old, and the Beavers still believe a national title is within reach. It just might take a different approach than what they are used to.

“We are so young this year, you can almost guarantee we won’t be going into (the National Tournament) as the No. 1 (seed) and maybe that’s a good thing,” Regier said. “Maybe going in as a No. 4 or No. 5, you want to be in the Top 10, so maybe even No. 10. Go in as a different number and maybe it works out better for us.”

Johnson added: “The last couple of years, we have had chances. But, couldn’t get it done. In the national tournament, you miss one or two chances a game that could be the ticket to sending you home.”

Following tradition, the Beavers will be tested throughout the regular season against a handful of quality (and usually ranked) opponents. It’s seen as preparation for the single elimination national tournament.

“We got a really tough schedule this year, again,” Regier said. “I think that is going to prepare us for the National Tournament, which is an absolute grind. Part of it being a grind is you have to get some bounces to go your way and hopefully that might work for us this time. But, you never know.”

Puck luck hasn’t been too favorable to the Beavers in the past. Perhaps this transition period and the willingness to possibly give up the No. 1 seed (and the added pressure that comes with it) can solve this problem. Time will tell.

The Beavers host exhibition scrimmages this weekend on Friday (7 p.m.) and Saturday (noon) against Briercrest at Maysa Arena.