Cooking up a rivalry win 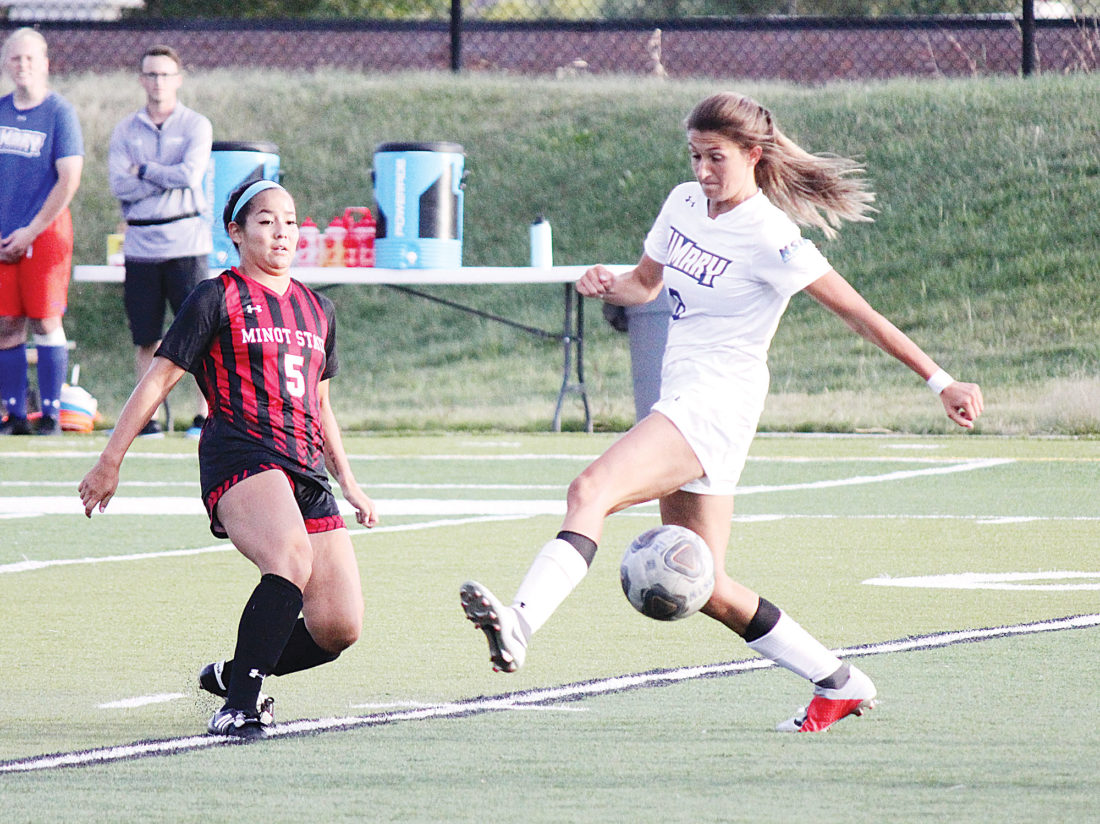 Jordyn Cook was exhausted and had no interest in playing 20 minutes of sudden-death overtime. So, with 2:09 remaining in regulation, the sophomore forward decided to be the hero.

“I’ve been out for two weeks because I have been injured, and I knew I couldn’t run anymore,” Cook said. “I was like, ‘Let’s get this game over with.'”

That’s exactly what she did.

On a free kick cross from Audrey Wilson, Cook buried the game-winning goal to lift the Minot State women’s soccer team over Bismarck rival, the University of Mary, in a thrilling 3-2 victory Tuesday evening at Herb Parker Stadium.

Paying attention on the sidelines proved to be quite beneficial for super-sub Cook. 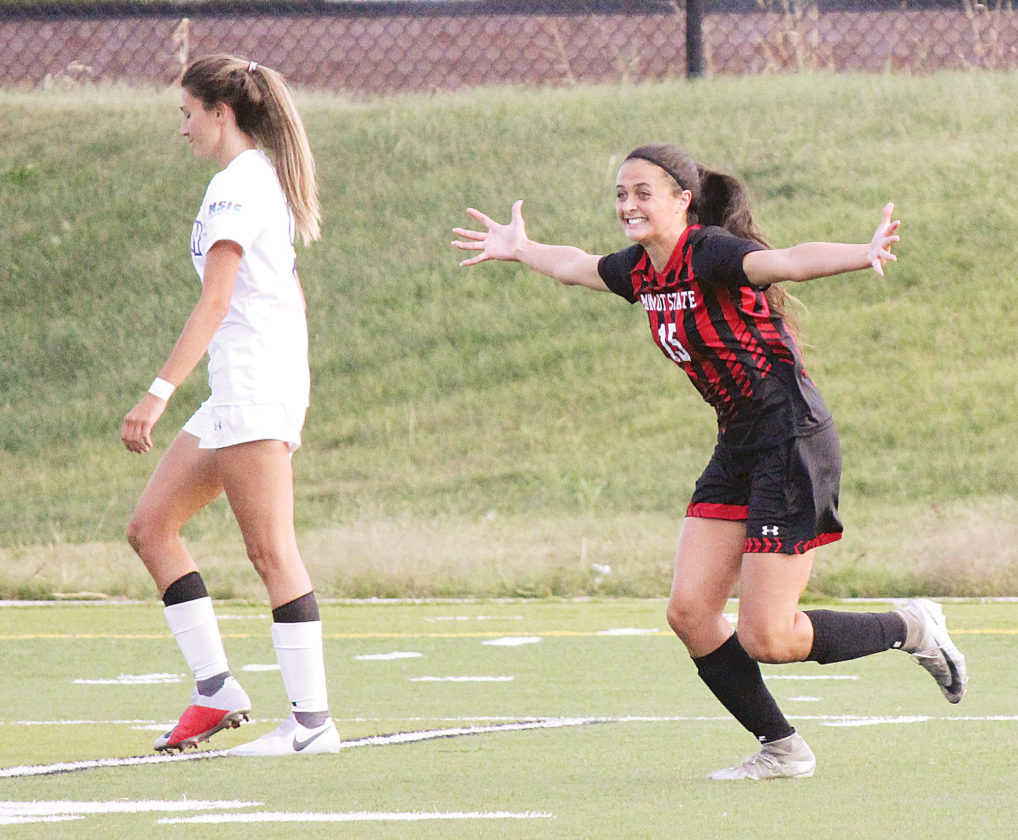 “When I was out, I saw that all of our crosses were going to the back post,” Cook said. “So, when I came into the game, I was like let me just finish it when it comes back there because nobody is guarding it. I went on and it went right to the back post and I kept thinking no overtime. I threw my whole body at it and put it in the back of the net.”

The Marauders (1-2, 0-1 NSIC) didn’t waste much time (4 minutes and 28 seconds to be exact) in trying to silence the lively, vuvuzela-wielding crowd of 315 people in Minot.

U-Mary junior defender Tiffany Ohlhauser volleyed home a cross for the first goal of the match. Neither the traffic in front of the net, nor MSU goalkeeper Erin Rafferty, could block the shot.

The Beavers turned to their leading goal scorer, sophomore Sofia Lewis, for the quick reply.

Pressured on a pass back to her, Lewis unloaded a one-time shot from 30 yards out. The ball dipped under the crossbar and out of the reach of U-Mary goalkeeper Madisyn Waltman.

“Something took over my body and I just felt it,” Lewis said. “I knew the second that I was going to hit it, that it was going in.”

The Marauders regained the lead seven minutes later, as the Beavers couldn’t clear the ball out of the 18-yard box and Jade Smith slipped through Caylin Cathey.

U-Mary held a 6-4 shot advantage to go with its 2-1 lead at halftime. However, the Beavers looked like a more focused team in the second half.

“I told them that the first 10 minutes of the second half would be a little bit tough, but after that I thought Mary would wear down,” Spain said.

The midfield play of Meagan Kawahara, Ashley Hunter, Gabrielle Kwiatek and Melanie van Walstijn put in a shift to allow the Beavers to keep possession a majority of the second half.

“We won that game and hung with our three midfielders, three-on-six, that whole game for 90 minutes,” Spain said. “I was impressed. Those girls deserve some game balls.”

Six minutes into the second half, Lewis deposited a Haley Berryman cross into the net for her sixth goal of the season.

“You hit it or you die,” Lewis said. “You got to throw your life at those type of things when it’s bubbling around in the box. It’s really stressful, but you just got to zone in.”

MSU kept the tempo full throttle the whole half, just pushing for the game-winning goal.

Berryman got the first crack at it with 11 minutes remaining, but she smacked the goalpost after taking an off-balance shot with an empty net staring her down.

The missed opportunity didn’t prove to be costly with Cook coming through in the clutch.

“We needed our center striker to get on the board and that was awesome,” Spain said. “It’s a big goal.”

Both teams finished with eight shots. MSU put six on target, one more than U-Mary.

The physicality of the rivalry game also generated four yellow cards. Berryman picked up one in the first half and cautiously avoided getting another one to stay on the field. U-Mary had three players get carded.

The Beavers head to Minnesota State-Moorhead on Friday for their first road contest of the regular season. Kickoff for that road NSIC contest is scheduled for 3 p.m.

Ashton Gerard/MDN Nedrose senior Alexis Leier spikes the ball against Rugby during a Class B volleyball game Tuesday at Nedrose High School. The Cardinals fell at home against the Panthers, 3-0, in sets of 25-9, 25-11 and 25-14. Leier led the team in kills with 4, followed by Katie Koetter with 3.