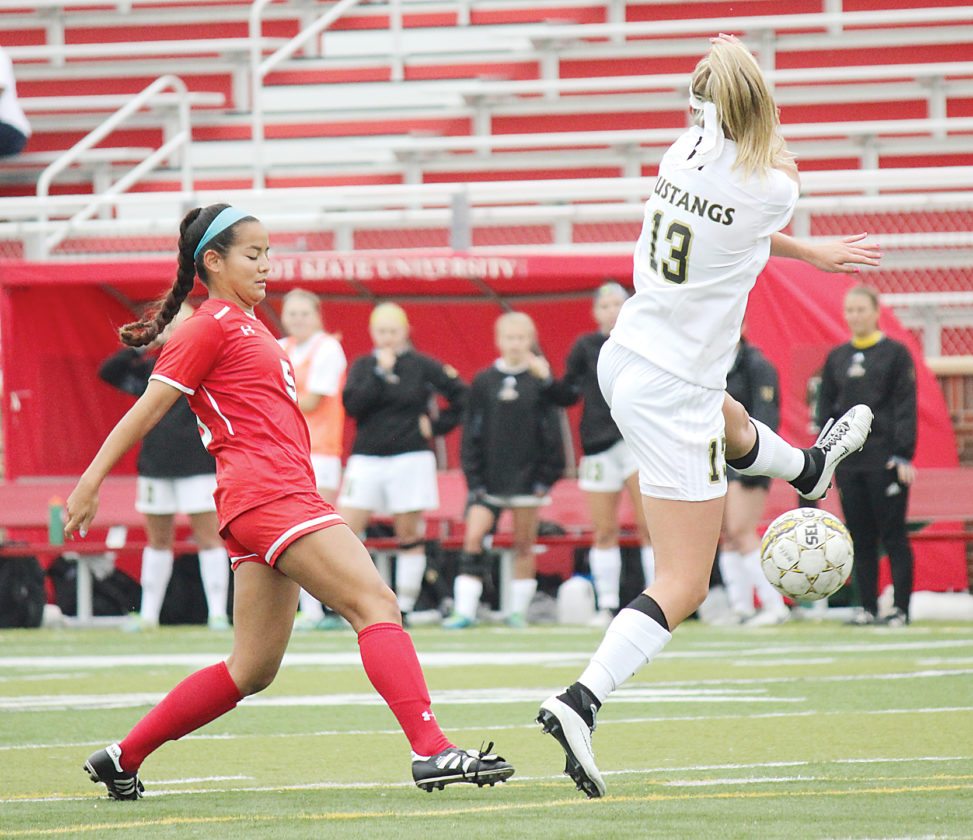 Alex Eisen/MDN Minot State midfielder Meagan Kawahara (5) takes a shot in the first half with SMSU’s Kelli Wentz (13) attempting to get in the way during a Northern Sun Intercollegiate Conference game played Sunday at Herb Parker Stadium.

Given all the chances the Minot State women’s soccer team had Sunday afternoon at Herb Parker Stadium, a 3-0 shutout victory over winless Southwest Minnesota State was a rather tame result.

“I just wanted to win a Sunday game,” MSU coach Jason Spain said. “I thought we were a little lethargic. We could have had five or six more (goals). But, it’s not the end of the world. We will take the win.”

It was the Beavers first win on Sunday in four attempts this season. And, with a 4-0 win over Sioux Falls on Saturday, MSU completed its first perfect six-point weekend of the season. 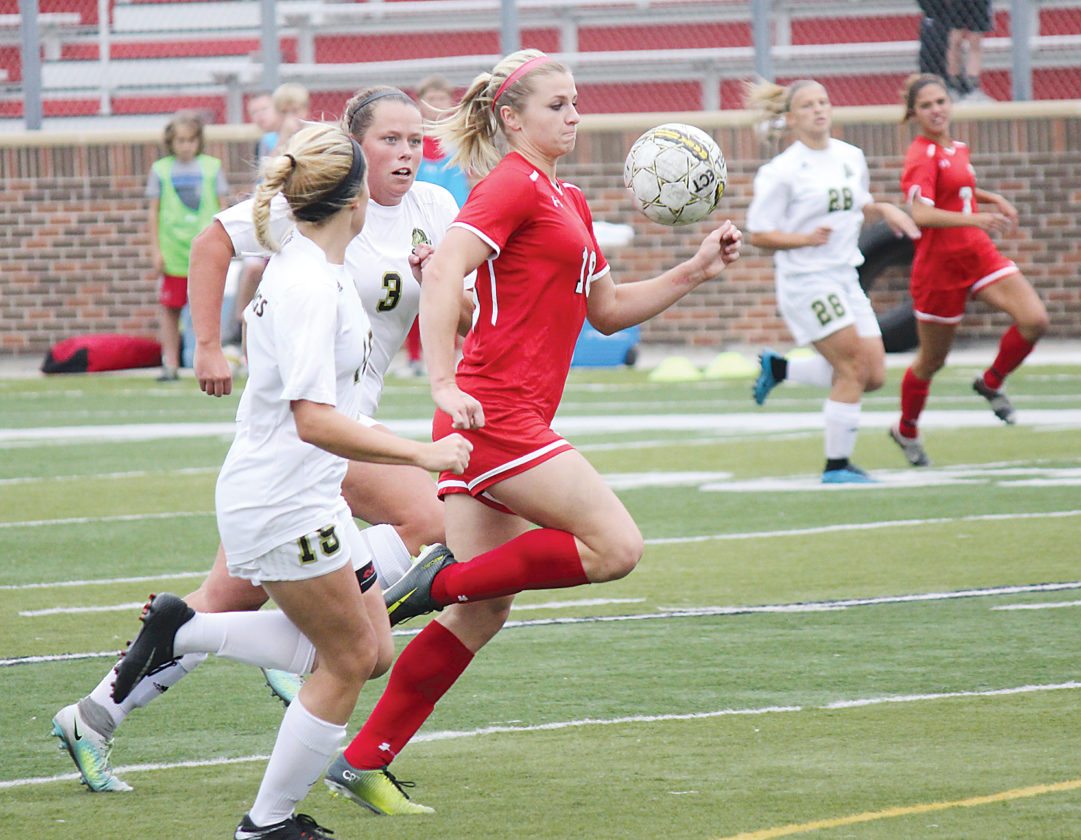 The Beavers went from being outside the NSIC Tournament playoff picture and into seventh place — a point behind three teams vying for the pivotal fourth spot. The Top 4 teams in the conference get to host first-round NSIC Tournament games.

“We got to keep getting sixes on the weekends,” Spain said. “Push for a home playoff game and from there make our run. I think we can beat anybody. We just got to execute and get it done.”

It took until MSU’s 10th shot of the half to score the opening goal.

A cross near the corner flag by junior Haley Berryman picked out the forehead of freshman Sofia Lewis for her sixth goal the season — tied for second-best in the conference behind Bemidji State’s Rachael Norton with seven goals.

Berryman, with two assists Sunday and four over the weekend, is now tied for third in the NSIC with four helpers on the year.

“Maybe just stay more composed when we get into the attacking third,” said junior Sydnee Canales on breaking down why the Beavers couldn’t capitalize on more of their opportunities. “Finding feet more and not forcing it as much. But, for the most part, I think we looked pretty good today.”

The Mustangs (0-9, 0-7 NSIC) put MSU under pressure early in the second half.

A driven shot by Fabiana Peiro forced a diving save by MSU sophomore goalkeeper Erin Rafferty. Then, on the ensuing corner kick, a header by Morgan Darner was collected by Rafferty as well.

Rafferty made two more saves later in the half to earn her second straight shutout.

Helping anchor the backline, senior defender Kelli Creese scored her second goal of the season and MSU’s second of the game after some precise passing by the Beavers.

Another cross in by Berryman reached freshman Jordyn Cook inside the 18-yard box. Marked tightly by SMSU defenders and her back to the goal, Cook rolled the ball off to a charging Creese.

“I just saw the open space and ran into it,” Creese said. “Their forward was pushing up really high, so I pushed up into the space and our sweeper kept stopping her. We were kind of front and backing her, so it was like a double mark.”

That allowed Creese to migrate upfield more with the safety net of another defender back behind her to cover. Plus, the ball was stuck on the Mustangs’ side of the field for most of the game.

Build up play less than four minutes later with 24 minutes left in the second half produced another MSU double assist.

In a similar play that created the second goal, freshman Morgan Myers crossed the ball in to Lewis and she laid the ball off to junior Sydnee Canales for a close-range strike.

“I just remember Sofia (Lewis) getting the ball down the line,” Canales said. “So, I just made a b-line to the near post.”

SMSU registered 11 shots, four each from Peiro and Emily Huddleston, and goalkeeper Jenna Meyer made 11 saves at the other end of the field.

Alex Eisen/MDN Minot State midfielder Meagan Kawahara (5) takes a shot in the first half with SMSU’s Kelli Wentz (13) attempting to get in the way during a Northern Sun Intercollegiate Conference game played Sunday at Herb Parker Stadium.