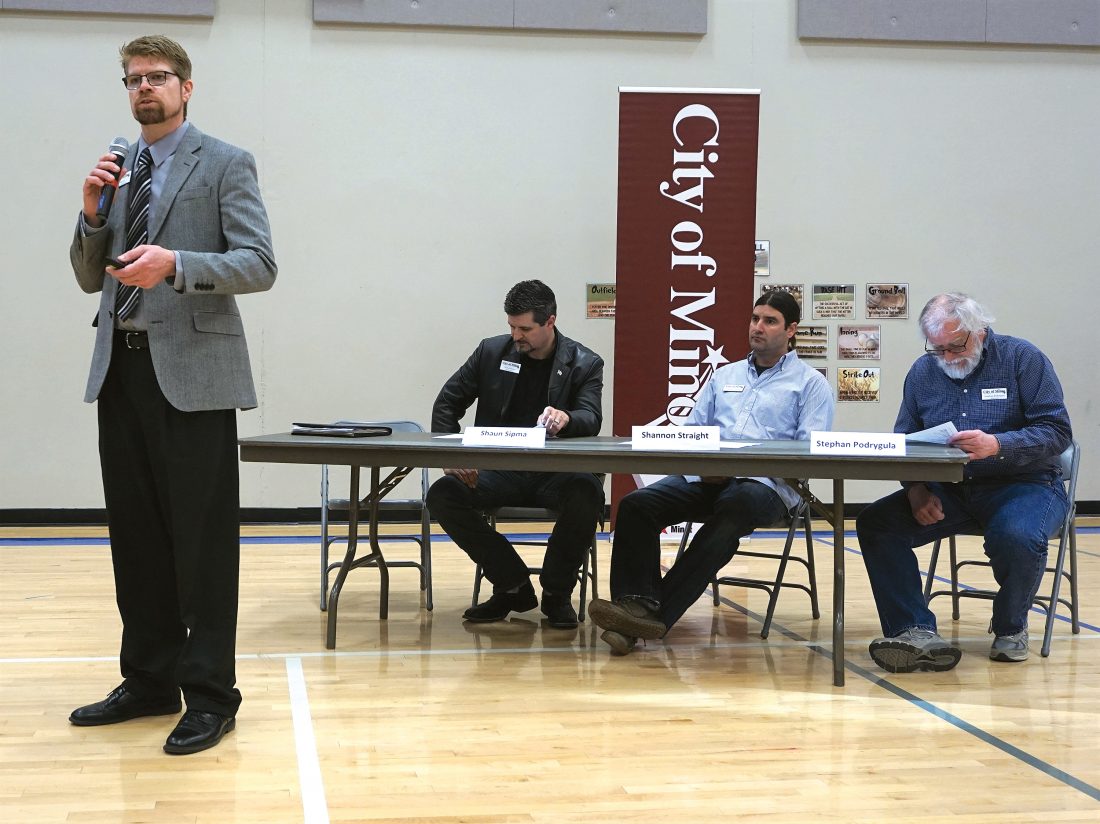 File Photo City Manager Tom Barry speaks at a townhall meeting in May at Perkett Elementary School. Behind him, from left, are Mayor Shaun Sipma and council members Shannon Straight and Stephan Podrygula.

It was a year of challenges for Minot city government in 2019.

In some cases, it also was a year of public discontent with city government, whether over city actions or inactions. From an open meetings violation to lack of movement on curbside recycling, the Minot City Council and the public have each had their frustrations.

On a positive note, the city council, with the help of the city manager and staff, developed a budget for 2020 that won’t hike taxes after a couple of years of significant increases. The city’s proposed tax levy is dropping due to the transfer of the city recreation department to the park district.

The 2020 budget is a record, though, at $275 million in spending. The large amount is due to inclusion of expenses for the flood protection project and Northwest Area Water Supply project.

The budget includes a council pay raise from $595 a month to $1,190 a month, which council members formalized in an ordinance in December. The mayor’s pay would increase from $750 to $1,500 a month. Council members indicated the pay raises are necessary to keep up with pay in other cities and fairly compensate for the time involved.

The size of the pay raise and the five-year renewal of the city manager’s contract, which doesn’t expire until next August, raised eyebrows and added to the council’s struggle this past year with public perception.

Unsettled voters could affect next year’s elections. Council member Shannon Straight, who has said he will not run next June, has called for term limits. He has proposed the mayor or council members step down after two terms.

Straight has commented about his concern over loss of public trust and failings of the council.

“As it pertains to the gathering space, we have had huge missteps, and I’m going to own some of my own,” he said last September. “I’ve dropped the ball. I have to apologize to the public.”

Other council members whose terms are expiring in June are Josh Wolsky and Stephan Podrygula. Both say they haven’t made final decisions yet about whether to run.

Mayor Shawn Sipma has spoken out on various occasions against the negative attitudes and actions by some residents, including those who have taken their frustrations out on city employees. In a newspaper column in November, he wrote about the trouble with social media and “the negative know-it-alls who all-too-casually spew purposeful misinformation from the safe anonymity of their keyboard, without regard for the damage they do to individuals or to our community as a whole.

“We’re certainly not afraid of criticism. Discussion surrounding legitimate, rational, fact-based criticism is part of being involved in local government,” he wrote. “But those aren’t the critics we’re talking about.”

The council stepped up its community engagement efforts with two town hall meetings, at which city staff addressed issues in the public spotlight and heard from residents.

Among topics that garnered public discussion in 2019 were a couple of Broadway housing projects. A group of local developers proposing the mixed-use Blu on Broadway are seeking city resilience money to assist in creating affordable apartments for low-to-moderate income families. Lutheran Social Services of North Dakota has proposed affordable housing along with a family homeless shelter that would also receive resilience funds.

Other resilience projects, including the proposed downtown gathering space and a new city hall, have drawn naysayers, as has the slow progress of the projects. To address the city’s space needs, the council will inquire into purchasing the former Wells Fargo building downtown.

A longstanding subject of public discontent, the downtown parking ramps, became less a topic of discussion in 2019, although still costly. The city went ahead with installing a roof and drainage system on each of the two parking ramps, costing taxpayers $946,125. The work was necessary to preserve the structures.

Other actions stemming in part from resilience efforts also caught the public’s attention. They included MAGIC Fund expenses of $300,000 for a professional marketing consultant to create a one-brand strategy for the community and a diversion of MAGIC Fund dollars to hire an economic development specialist. The new position remains unfilled as the city searches to find the right candidate.

In a less controversial move, the council tapped the MAGIC Fund in 2019 for $1 million over two years for a Business Accelerator Fund, a revolving loan fund managed by Souris Basin Planning Council.

Decisions made by the council in 2019 included extending the bar closing time to 2 a.m., as allowed in state law. The decision took some by surprise because the time change was introduced and adopted on second reading of an ordinance originally approved to allow certain alcohol sales on Thanksgiving. The council voted 4-3 after hearing from three bar owners who supported the change.

Yet to be decided in the new year is whether to pursue curbside recycling, and if so, what the plan should look like. The council ended the year with interest in hearing from the public, either through a survey or public vote in June.

The council turned its attention to recycling various times in 2019. It reviewed the research and options offered by its Public Works Department and heard from residents. From the environmentally conscious to folks who feel the city has better uses for its money, residents spoke up at an October meeting to let the council know how their thoughts on recycling. Some residents supported exploring a partnership with the Kalix Recycling Center in Minot.

Another project likely to capture public attention in the new year is a signage plan to promote downtown and identify city destinations. The council reviewed a study that estimated the pricetag would begin at nearly $158,000.

The council had commissioned a signage study as part of the National Disaster Resilience Program, but actual funding for signs would need to come from other sources, possibly from groups outside city government. In October, the council discussed phased-in signage but took no action.

Also in 2020, building permit fees in Minot will be going up.

The council voted in August to adjust fees to better cover operational costs of the building inspection department. As a result of action by the North Dakota Legislature prohibiting cities, specifically Minot, from charging higher fees in their extra-territorial areas, Minot had to equalize its fees, which had been double for residents living in the two-mile extra-territorial area.

The city’s review of its building permit fees came from a need to recover that lost income and to address the current subsidizing of the building department with property taxes. The city hadn’t increased its fees since 1994.

In October, North Dakota Attorney General Wayne Stenehjem issued an opinion that the City of Minot violated the state’s open meetings law when it held an executive retreat in Washburn July 31 and Aug. 1. Stenehjem noted no options existed to access the meeting remotely or receive transportation aids. His ruling gave the city seven days to make minutes of the meeting available free of charge to anyone requesting them.

Sipma’s reply didn’t sit well with residents critical of the retreat, who perceived the response as too defensive.

“Today’s Attorney General opinion sets a precedent in the state because nowhere in state law does it say a municipality cannot have a meeting outside its jurisdiction,” Sipma wrote. “It was never our intention to hold a City meeting that was inaccessible to the public, and we believed we were operating in compliance with the open meeting laws. We have every intention of fully complying with the Attorney General’s corrective measures.” 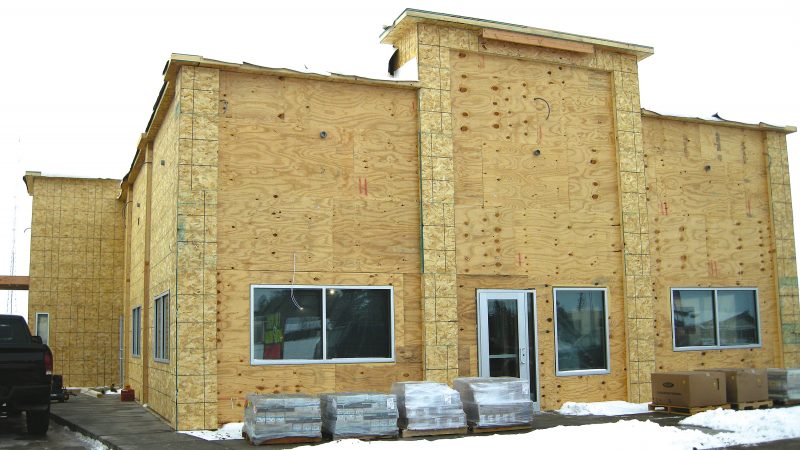