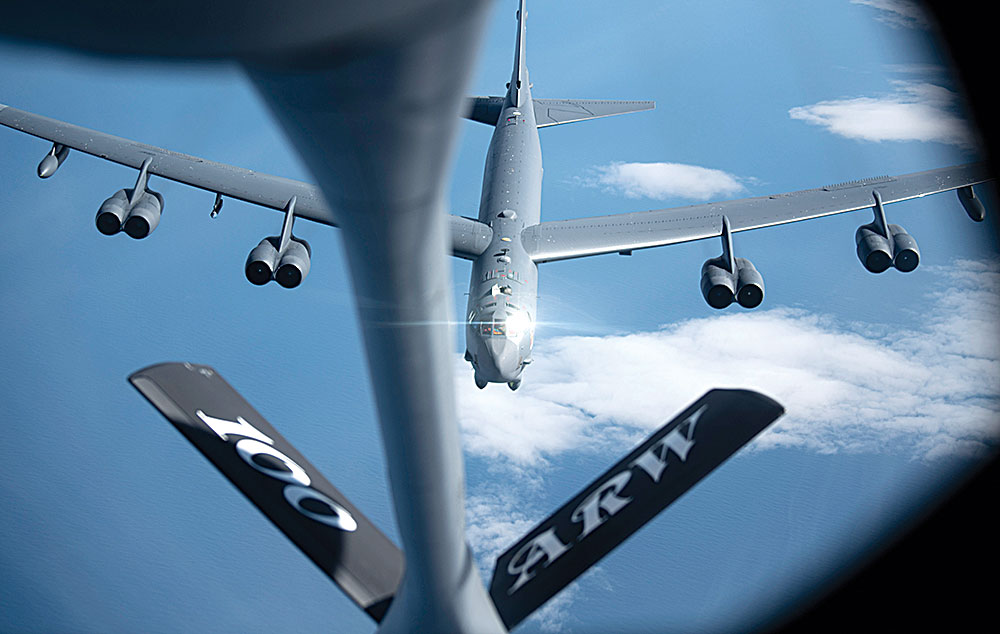 Submitted Photo A U.S. Air Force B-52 Stratofortress from the 5th Bomb Wing at Minot Air Force Base approaches a KC-135 Stratotanker from the 100th Air Refueling Wing, RAF Mildenhall, England, to receive fuel during a strategic bomber mission off the northern Norwegian coast on June 3, shown in this U.S. Air Force photo.

Two B-52 bombers from the 5th Bomb Wing at Minot Air Force Base recently conducted a long-range, long duration strategic mission throughout Europe, the Arctic and Baltic regions on June 15, while also integrating with a Baltic Operations exercise.

The 5th Bomb Wing’s participation in the 49th iteration of the Baltic Operations exercise follows a training exercise over the Arctic Ocean and Laptev Sea, in which four B-52Hs conducted training with Norwegian F-16s and F-35s on June 3.

“U.S. Strategic Command units regularly conduct training with, and in, support of all Geographic Combatant Commands. In our case, this takes the form of Bomber Task Force (BTF) missions which provide our Strikers opportunities to integrate with allies and partners and to become familiar with multiple forward areas of operation,” said Gen. Tim Ray, AFGSC and Air Forces Strategic-Air commander. “All of this feeds into a larger effort to assure allies and partners, and to help maintain global stability and security.”

In May, B-1B Lancers from the 9th Expeditionary Bomb Squadron, 7th Bomb Wing, Dyess AFB, Texas, deployed to Andersen AFB, Guam, in support of Pacific Air Forces’ Bomber Task Force missions. Over the course of the month and into June, the B-1Bs as well as B-52H bombers conducted bilateral training with the Koku-Jieitai, or Japanese Air Self-Defense Force.

“BTF missions are routine demonstrations of the credibility of our forces to address a diverse and uncertain security environment, and particularly AFGSC’s ability to deliver lethal, long-range strike options across the globe anytime, anywhere,” Ray added.

As the sole provider of bombers for the Western Alliance, Air Force Global Strike Command’s Strikers train to be the premier long-range precision strike force that provides the nation and its allies the ability to compete, deter and win on the world stage.