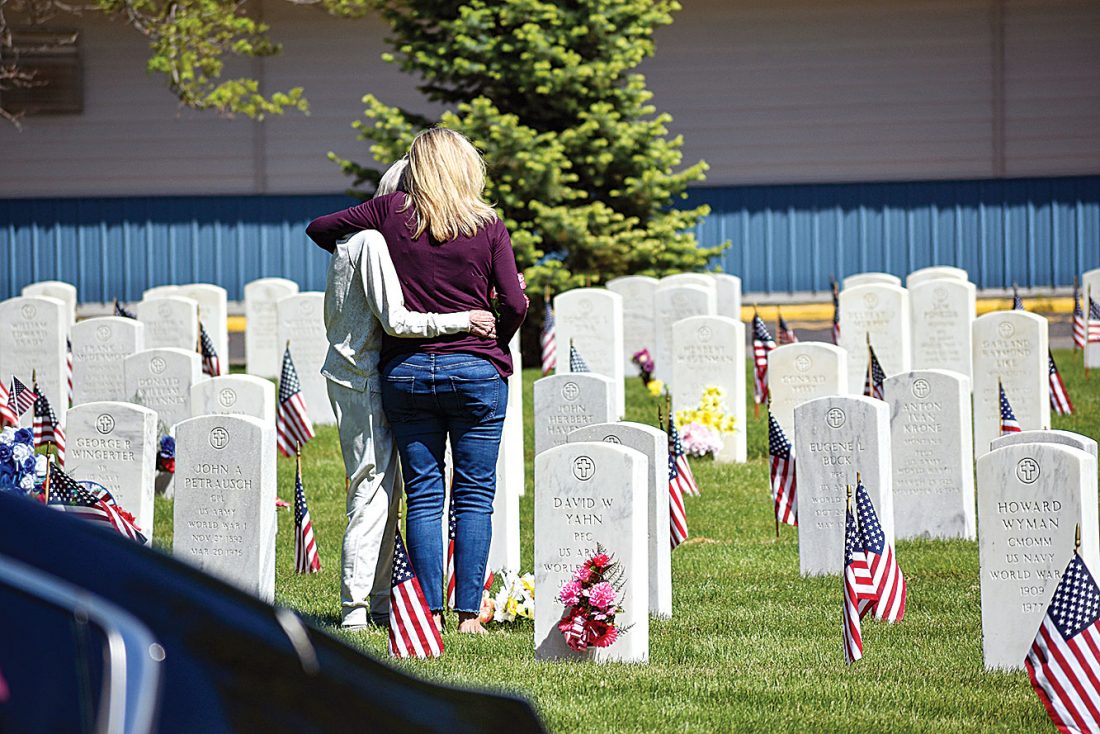 AP Photo Two women embrace next to a grave at the veterans' cemetery at Mountview Cemetery in Billings, Mont., Monday.

BILLINGS, Mont. (AP) — Americans settled for small processions and online tributes instead of parades Monday as they observed Memorial Day in the shadow of the pandemic, which forced communities to honor the nation’s military dead with modest, more subdued ceremonies that also remembered those lost to the coronavirus.

On the weekend that marked the unofficial start of summer, authorities warned people heading to beaches, parks or backyard barbecues to heed social-distancing rules to avoid a resurgence of the disease that has infected 5.4 million people worldwide and killed over 345,000, including nearly 100,000 Americans, according to a tally by Johns Hopkins University.

Memorial Day commemorations were canceled or toned down across the country. Veterans, along with nursing home residents, have made up a significant portion of those who died in the U.S. outbreak.

Frank Groblebe and his wife placed lilacs on several graves at Mountview Cemetery in Billings, Montana, including those of his mother and father, who served in the Philippines as a Navy Seabee during World War II. Groblebe said he approved of plans to curtail the ceremony, which included a motorcycle procession and moments of quiet remembrance.

“This is our freedom. This is our history. It’s what they fought for,” Groblebe said, briefly choking up with tears. “Anything that shows respect for it is all right with me.”

Sharon Oakland placed mums on the grave of her father, also a Navy veteran in World War II. She watched from a distance as the motorcycles rolled by. “What they’ve done is remarkable given what’s going on with the virus,” she said.

The day looked different across the U.S. The 37,000 American flags traditionally placed on the Boston Common to honor Massachusetts military members who died in service were replaced with just 1,000 flags, to limit volunteers and onlookers. In Minneapolis, several bagpipers and drummers lined up outside the Minnesota Veterans Home and played as a parade of cars drove past.

“Even when the enemy is an invisible virus or a microscopic germ, the sacrifices made are just as meaningful,” Windham said. The ceremony, which included readings, vocal performances and gunshots from a ceremonial rifle team, were filmed over a series of days last week and edited together, Windham said.

In Chicago, a neighborhood group that’s been holding a parade for more than a half century also moved its event online, with video clips from previous years and messages from special guests, including veterans and Mayor Lori Lightfoot. In the suburb of Lisle, a convoy of vehicles from fire departments and VFW posts drove silently through village streets.

“It’s something we’re upset about, but we understand,” said Raymond Aalbue, chairman of the United Military Veterans of Kings County, which usually puts on a parade in Brooklyn. There’s “no reason to put anybody in harm’s way,” he said, adding “it’s really cutting quick to the heart of all the veterans.”

On Long Island, a small group of veterans saluted, wearing masks and spaced several feet apart, as a parade of cars passed beneath a large American flag.

New York Gov. Andrew Cuomo joined a private ceremony at the Intrepid Sea, Air & Space Museum in Manhattan, with both the sacrifices of military members and the challenge of the coronavirus on his mind.

“Over 100,000 Americans will lose their lives to this COVID virus. How do we honor them? We honor them by growing stronger together,” he said.

“We want to make sure we remember them and thank our heroes today.”

Presumptive Democratic presidential nominee Joe Biden made his first in-person appearance in more than two months by laying a wreath at a veterans park near his Delaware home. He wore a face mask as he and his wife bowed their heads in silence. He saluted and could be heard saying “Never forget.”

Biden told reporters, “I feel great to be out here.” He also yelled to a group standing nearby, “Thank you for your service.”

After two days of playing golf, President Donald Trump visited Arlington National Cemetery, where he laid a wreath at the Tomb of the Unknown Soldier, which overlooks rolling hills dotted with white tombstones. He later spoke at Baltimore’s historic Fort McHenry, noting that tens of thousands of service members and national guard personnel are currently “on the front lines of our war against this terrible virus.”

Trump said brave warriors from the nation’s past have shown that “in America, we are the captains of our own fate.”

Tens of thousands of Americans still headed outdoors over the weekend to shake off some pandemic restrictions. Missouri’s health director issued a dire warning Monday after photos and video showed weekend revelers partying close together. One video posted on social media showed a crammed pool at Lake of the Ozarks. Many of those seen in the video were young people, who may not experience symptoms.

“When they then carry the virus and transmit it to a more vulnerable person, this is when we tend to see the long-lasting and tragic impact of these decisions that are being made,” said Missouri Department of Health and Senior Services Director Randall Williams. St. Louis Mayor Lyda Krewson called such high-risk behavior “irresponsible and dangerous.” 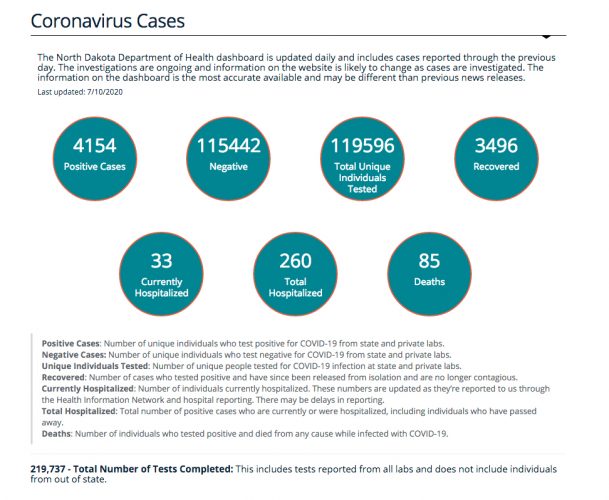