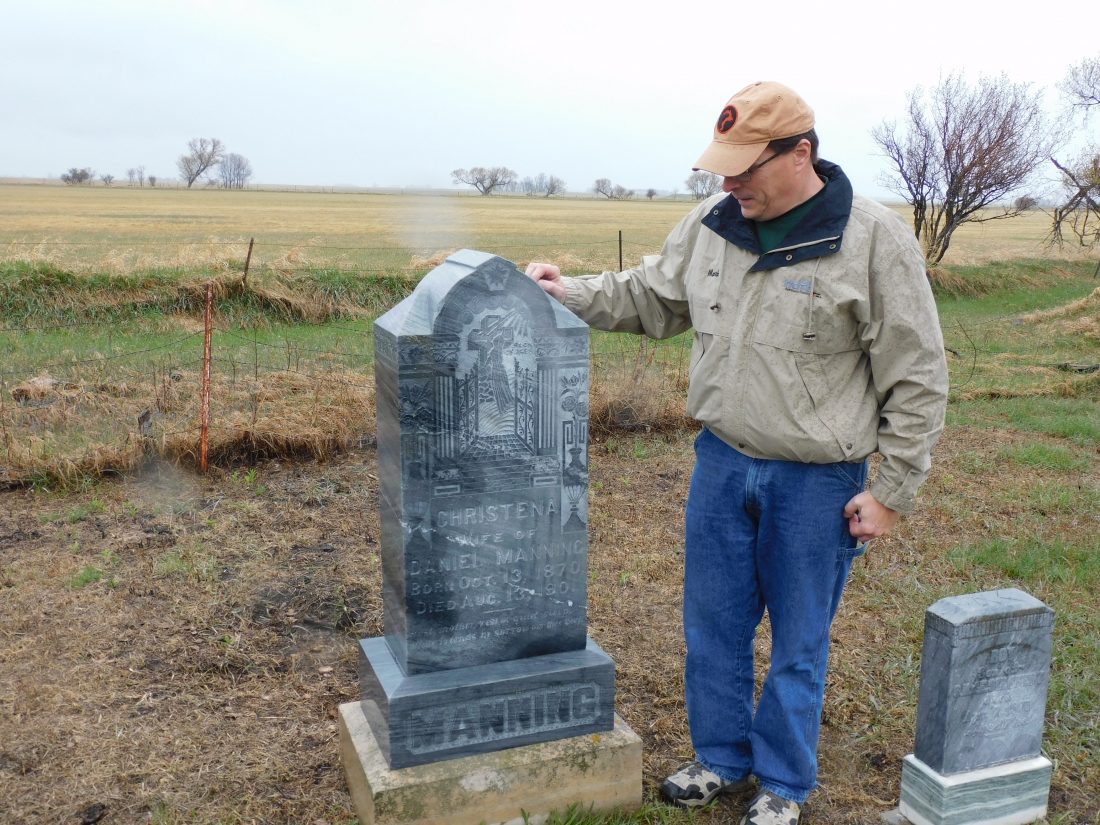 Kim Fundingsland/MDN Mark Jorgensen, Antler Cemetery Association, has been very active in the restoration of the historic Pioneer Cemetery situated on the north bank of Antler Creek, a short distance from the Canadian border.

ANTLER – The location is a few yards from the Canadian border, on the north bank of Antler Creek. It was overgrown by bushes, trees and tall grasses. A crumpled wire fence and rusty gate loosely marked the perimeter. Years of neglect left the tombstones above the final resting place of early-day settlers tipped over or tilted.

That was in 2018. Today the remotely situated burial location of early settlers looks much different. The bushes and trees that had grown unchecked for decades have been removed. The tall grass has been cut and the tombstones carefully restored to their original positions. The transformation of the nearly forgotten Antler Pioneer Cemetery is remarkable.

Mark Jorgensen, secretary treasurer of the Antler Cemetery Association, took a big interest in restoring the cemetery where early pioneers in the area helped open the country for others.

“In the fall of 2017 I got involved and created the Antler Cemetery Association,” said Jorgensen. “The city didn’t have funds or staff to take care of everything anymore and the Pioneer Cemetery hadn’t been taken care of for years. I kind of took it on as a personal project.”

Jorgensen lives on a farm a few miles from the cemetery that has been in his family for more than 100 years. He is familiar with the history of the region. Those interred in the cemetery include the earliest white settlers in the border region near Antler. One of the graves is that of Jane Sieffert, a pioneer wife who died in 1886 at age 51, just a few months after her family arrived in Antler Township.

“The Sieffert family arrived in Antler township in 1886. The family consisted of Clement Sieffert, his wife Jane, two boys, Sam and Gus, and three girls, Christina, Margaret and Jennie. The Mother, Jane, was not to enjoy her new home for very long. She passed away in the fall of 1886.

There was no Doctor or Undertaker available, but the neighbors gathered and did what they could. A carpenter obtained some oak lumber and made the casket; it was lined with silk. After much thought a spot was selected on the north side of the creek, to become one of the first Cemeteries west of the Mouse River in Bottineau County.

She was the first white woman interred in this area and rests there today with two of her daughters and several grandchildren.”

On the reverse side of Roy Sieffert’s tombstone an inscription reads:

“Our darling who hath gone before

To greet us on the blissful shore”

There are no markers for others believed to be interred alongside the known and marked graves, only oral history and other references from which to base conclusions.

“I do know several babies were buried there,” said Jorgensen. “There was a three-year-old that did have a head stone.”

Schell’s 1975 book also makes the claim that several babies are buried in the Pioneer Cemetery. Although there are no tombstones or other markers today to back up that claim, it is reasonable to assume that young children were indeed laid to rest on the prairie near their mother and grandmother.

Today Jorgensen is the acting caretaker of the old cemetery, helping ensure that proper respect and dignity is being shown to those who were among the very first settlers to brave all the challenges of living in a remote and isolated location along the Canadian border.

“Some were disappointed the trees weren’t trimmed and the cemetery wasn’t getting taken care of. It wasn’t getting mowed as often as it should be,” said Jorgensen. “Now I’ve been keeping it mowed and we have a promise that a new fence will be built around it.”

So, at least for the foreseeable future, Antler’s Pioneer Cemetery once again quietly helps tell the story of those rugged few who ventured forth into a virtually unknown land, complete with the hardships of survival 120 years ago.