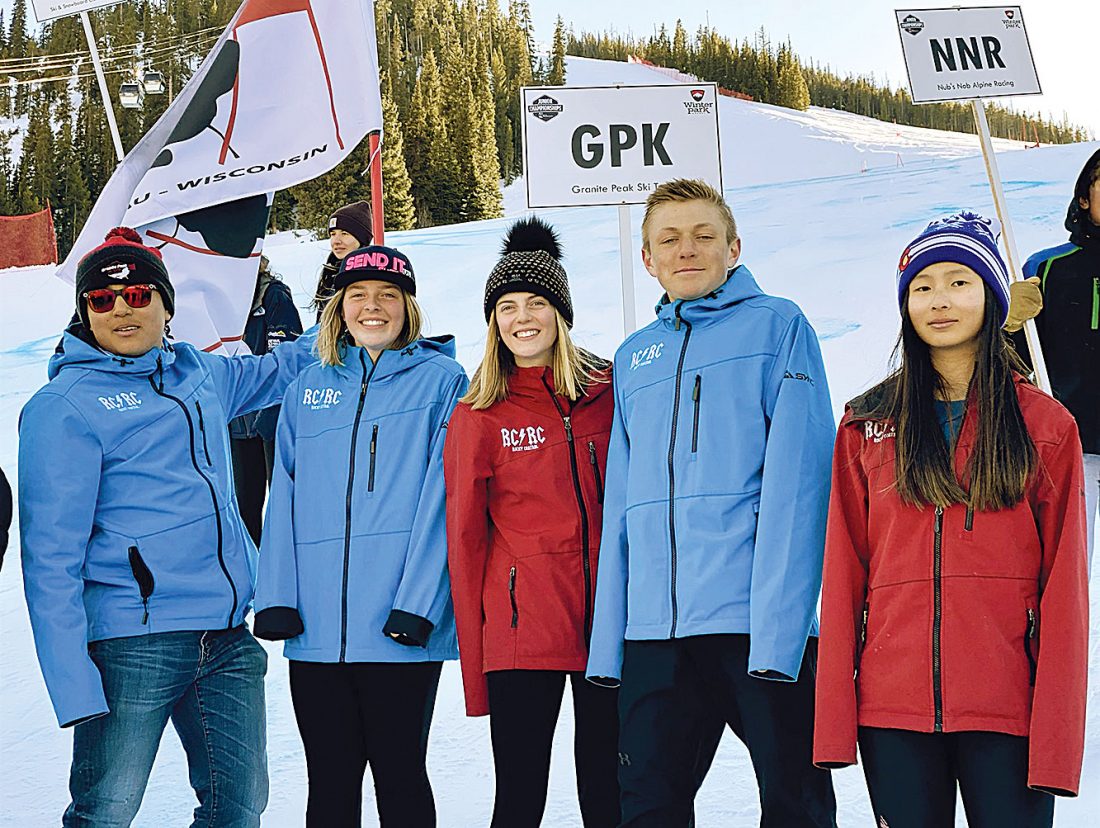 BOTTINEAU – Nicolas Loberg spent his 16th birthday watching the start of the Rocky/Central Junior Championships on March 2 from the sidelines.

An injury during a practice run kept the Bottineau skier from taking to the slopes, but his response to the unfortunate turn of events led to the honor of receiving a sportsmanship award bestowed by peers and coaches who admired his supportive, positive attitude.

Loberg said giving his teammates a high five, a hug or a word of encouragement became his reason to be there.

He credits his parents, Erin Conroy and Paul Boettcher, for serving as models for his behavior that earned him the sportmanship recognition. His mother is his inspiration and his father is his motivator, he said.

Loberg also doesn’t view the setback as ultimately holding him back. He’s set his goals high at collegiate competition and possibly even the Olympics, where he would be eligible to compete for Columbia in South America.

One of four siblings, including two from Columbia, in his adoptive family, Loberg left his birth country at four months old. The family lived in Minnesota for a couple of years. They later lived in Fargo, and for more than six years, they have lived in Bottineau.

Loberg started skiing at age 9 at the nearby Bottineau Winter Park. He began racing at age 10, which is old for a competitive skier, he said.

“When I first started doing it, it was more just for the fun of it, just to get better at it. I liked being good at doing things. I didn’t really settle for coming in last place in anything,” he said. “I liked it. I thought it was a lot of fun, and for a while I just started out free skiing – going out with my brother, with friends.”

His coach, Ron Lawrence, had coached at Bottineau Winter Park in 2013 when he was living in Williston. He was Loberg’s first race coach.

“He’s got a lot of natural ability – a very, very good athlete,” Lawrence said. “He’s surpassed a lot of his competition just because he’s worked really hard at it. He definitely has a passion and love for it.”

Lawrence said Loberg now is entering a tough phase of his sport, when he will be taking on more experienced and older skiers and will have different equipment to learn to use. The challenge will be not to become frustrated but to persevere and work hard.

“He showed this year that he was willing to put in the work and the time and really work on his development. I was very, very pleased at his work ethic and how seriously he took his skiing,” he said. “It’s a lot to balance. The athletes have to balance their school work and their skiing. When you get to the level he is at, this is kind of your full-time job for the next few years.”

This past year, Loberg’s ski season started in October with camps in Colorado and Wisconsin. He would spend a week or so in Wisconsin at a time, flying or making the 10-hour drive between Bottineau and Wausau.

Loberg competed in Michigan, Wisconsin and Colorado in four events this past season. As an Alpine skier, he competes in Slalom, Grand Slalom, Super-G and, for the first time this year, the Downhill.

He raced only the Slalom on the last day of the Junior Championships because of his injury. The Rocky/Central Junior Championships drew about 200 competitors in each the U16 and U14 age categories, including three youth from the Bottineau Winter Park Ski Team. Top finishers moved on to the national event.

“We had two days of training, and I don’t really hold back when it comes to ski racing,” Loberg said. “In the first run, I did really well. I had a really solid run for my first time ever doing Downhill and it was a lot of fun – super exhilarating, super fast and I was super excited. And then the second run, I tried to do a little more than I think I could have given myself credit for, and I ended up taking a gate straight to the head, and it came around and whipped me in the back. Then I rolled downhill from there.”

Left with a bad headache, Loberg said he didn’t think too much of it until he woke the next morning and could barely get out of bed. He planned to attempt to train but didn’t have the energy. The doctor’s diagnosis was a concussion.

“It’s really tough to hear that. I had put in a lot of work, a lot of time. I’ve put in months and days of training, breaking my limits and creating new ones, going home tired and waking up again the next morning and doing it all over again,” he said. “But I knew that if I didn’t listen and I just went out there and I raced against her (doctor’s order), I could possibly lose it. I could be seriously injured. And so I had to think about not just my health but my future in the sport.”

After coming close to qualifying for the Rocky/Central Junior Championships in 2019, Loberg had determined to qualify in 2020 by working harder in lifting weights, running and developing his physical and mental strength. He also plays football at Bottineau High School.

Loberg described the start of this year’s ski season as rough. He finished lower than he had hoped in some races and failed to finish others. That made him work even harder. At a race in Michigan, he did well. Placed in the 69th position before the race, he finished 13th. That convinced him he could compete with more experienced skiers.

“I’ve never really been one of the top kids, but I’ve always been able to compete with them if I can finish my run,” he said. At the Central divisional, he qualified for the Rocky/Central Championships in 45th place of 46 qualifying skiers. Four others from his Wausau club also qualified.

He plans to continue skiing under the Federation of International Skiing during his last two years of high school and into college. His dream is to ski for St. Olaf Academy in Minnesota.

Going through the international federation, he can list his nationality as Columbian because of his dual citizenship. Doing so could open a door eventually to try out for that country’s Olympic team.

“My goal as an athlete is to one day make it to the point where I’m able to make a difference. And I feel like as a Colombian athlete, if I’m able to make it as far as I want to, I’ll be able to really change a lot for a lot of people and give back to a place that, yeah, I might not have grown up in, but a place that means a lot to me in my heart,” he said.

Had his birth mother not made the choice for adoption and he hadn’t come to America, it’s hard to say where he’d be in life today, he said.