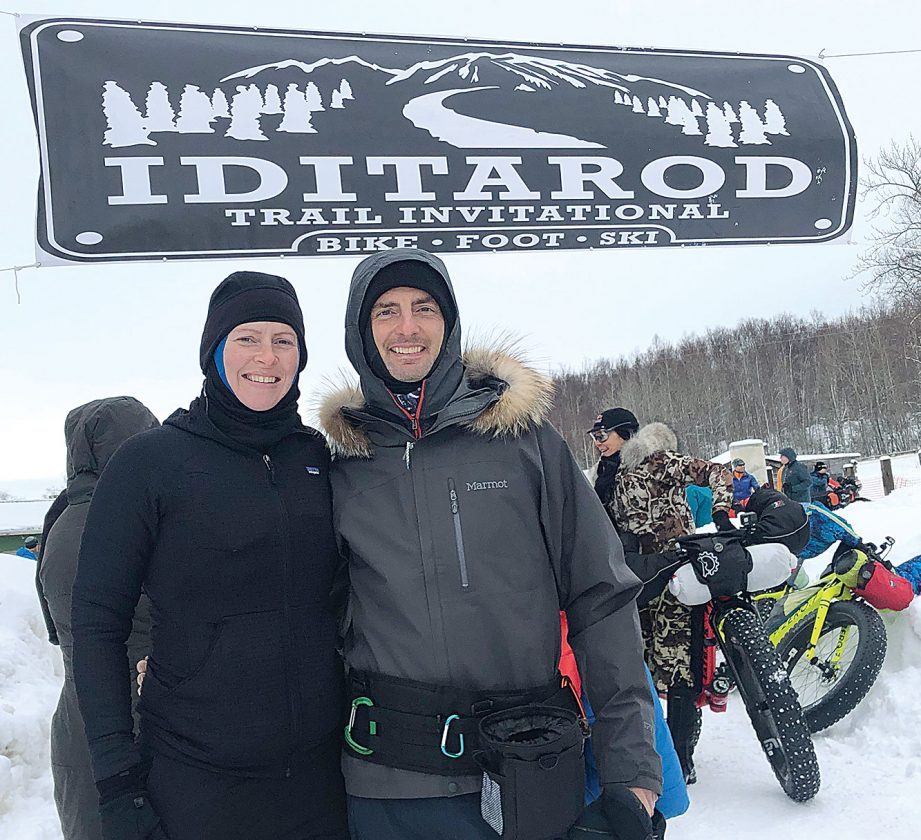 Battling snowstorms, cold and long days, Norby, of St. Paul, Minn., won the women’s foot division of the Iditarod Trail Invitational in Alaska during the first week of March.

In her fifth year of long-distance, winter racing, Norby made her first attempt at the Iditarod Trail Invitational. More veteran Iditarod participants are eligible participate in the 1,000-mile Iditarod race, which takes about 30 days.

Norby, 38, graduated in 2000 from Des Lacs-Burlington High School, where she was an athlete. Her parents, Mark and Kari Norby, still live in the Des Lacs area.

Norby graduated from the University of North Dakota in Grand Forks and lived in the southern part of the country for several years before moving to Minnesota about 10 years ago. She works at the University of Minnesota as an epidemiologist, studying cardiovascular diseases in populations.

It was after college that Norby began running marathons. She was pulled by friends into trail running after moving to Minnesota. She started with shorter races and eventually found herself doing longer ones.

Winter races can be completed by bike, ski or on foot. Norby races on foot, which can include snowshoes.

The races allow participants to pull a sled or carry a backpack with their survival equipment, such as clothes, food and other items necessary to exist if there is an issue along the trail. Norby said most competitors pull sleds because backpacks can create too much carrying weight.

She has competed in the Tuscobia Winter Ultra in Wisconsin in 80- and 160-mile races, in the 135-mile Arrowhead 135 in Minnesota and Manitoba’s Actif Epica, which offers distances up to 127.4 miles.

“There’s only been a few people to do all three of the winter races in one season. I was one of the people who have now done that. That was kind of a big goal of mine that I accomplished last year and gave me a lot of confidence heading into this year’s season,” she said.

“During these type of races, there’s very little to no sleeping,” she said. “You kind of tend to push during the night, maybe take some caffeine or maybe you take a short nap. You do have a sleeping bag with you so you can sleep out on the trail, and some people choose to do that as well.”

The Iditarod Trail Invitational is the premiere winter race for winter trail competitors. It follows the same path as the Iditarod dog sled races, starting at Anchorage and traveling through a remote area.

“They only let in pretty experienced winter racers,” Norby said. “They are not patrolling on snowmobile or anything so if you have a problem out there, it’s kind of up to you to get yourself to a safe area.”

Not many women tackle winter racing, and the Iditarod event especially draws only those well conditioned to the sport.

Because winter race competitors are a small community, Norby knew many of the entrants. Just over 70 people entered, including skiers and bikers. Norby estimated 24 were on foot.

Norby’s boyfriend also competed, and they were able to race together for about three-quarters of the event.

“I was pretty happy with it,” Norby said. “We had really challenging conditions this year, much more challenging than the last few years. So all of the times were pretty slow this year. All the biking times and all the times on foot were very slow compared to previous years.”

Alaska had a lot of snow, leaving the trail soft and the snow deep. It was snowing not long after the start of the race, and Norby said she used her snowshoes for about two-thirds of the race, which slowed her pace.

“We had high winds in the middle of the race that blew the snow and covered the trail and made a lot of drifts,” she said. “Then we had another snowstorm later in the race that made it, again, very challenging. There weren’t very many good weather days or good trail days when we were out there.”

She estimated the temperature was 25 to 30 below, without windchill, but she avoided getting cold by dressing for conditions and carrying enough food to maintain her calorie needs.

Competitors each sent ahead two small food bags, containing about five pounds of food and dropped at key sites by plane. A couple of roadhouses along the way offered food, and a couple of checkpoints had food.

Norby said she bypassed sleep the first night but slept about an hour and half at the second checkpoint. Catching a few hours sleep at checkpoints, she estimated she slept 20 to 25 hours total over the nearly eight days. Because of the tough conditions, everyone was exhausted near the end, and Norby said she slept five or six hours at the last checkpoint because she was in rough shape.

Norby trains by running in state parks on weekends and stays active and on her feet as much as possible during the week. She also races 100-mile races throughout the year as training. There are some summer races in Minnesota and Wisconsin, and Norby also participated in a summer race along the Maah Daah Hey Trail in Theodore Roosevelt National Park in 2018 and in the Black Hills in 2019.

Her preference, though, is the winter event with its survivalist character. From GPS for guidance to a stove to melt water, a racer needs to be prepared to take on nature alone.

“You have everything with you that you need to survive,” she said. “You’re very self sufficient.”

Minot voters will select two candidates from a field of five to fill positions on the Minot Park Board in the June ...

Minot voters will select two candidates from a field of five to fill positions on the Minot Park Board in the June ...